Leadership 21 years of “Compassion with Competence” by Hospice Africa - ehospice

21 years of “Compassion with Competence” by Hospice Africa 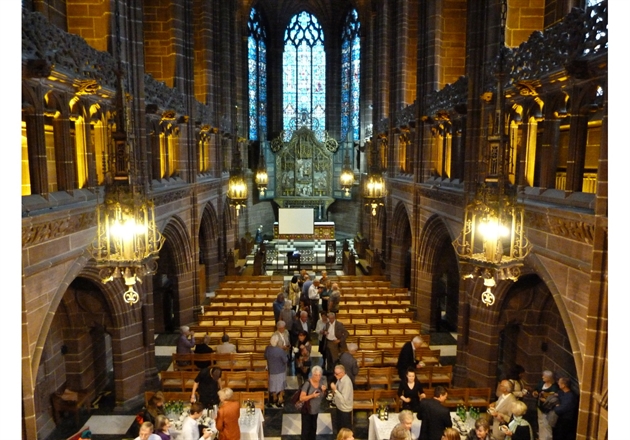 The celebrations took place from 18-20 September in Liverpool’s spectacular Anglican Cathedral. An exhibition in the Lady Chapel informed visitors of the work supported by Hospice Africa, which centred on Hospice Africa Uganda in Kampala.

Ann Vassie, Chair of Hospice Africa, explained that the board and staff of Hospice Africa consist entirely of volunteers, with a specific portfolio of essential skills. Mrs Vassie explained that this helped to keep operational costs to a minimum to ensure that the bulk of the money raised could go directly to programmes, equipment and educational grants to advance hospice and palliative care in Africa.

Hospice Africa Uganda (HAU) is the model hospice and educational centre which shows that hospice and palliative care is possible in resource-poor settings in Africa. It has three hospice sites in Uganda, all of which operate mobile clinics. A new children’s project funded by the UK’s Department of International Development is starting at one of these sites: Mobile Hospice Mbarara. The Institute of Hospice and Palliative Care in Africa (IHPCA) – the education arm of HAU – is a Private Tertiary Institute, accredited by the Ugandan National Council for Higher Education (NCHE).

Dr Anne Merriman is the founder of Hospice Africa and Hospice Africa Uganda (HAU) and is currently the director of International Programmes for Hospice Africa based at HAU. Dr Anne has recently been nominated for the Nobel Peace Prize for her work either directly or indirectly relieving the suffering of tens of thousands of patients and families.

Mrs Vassie commented on Dr Anne’s astounding impact, saying: “I think that (Dr Anne) has started a revolution in a way that will keep moving.”

On the final day of the exhibition, visitors were invited to attend Evensong, where an all-male voice choir sang in the main part of the cathedral. The priest officiating acknowledged the contribution that Dr Anne has made and continues to make to hospice and palliative care in Africa and the rest of the world, inviting the congregation to join him in prayer to thank the Lord for Dr Anne and her work.

Overseas fundraising is vital for the organisations supported by Hospice Africa, firstly because these organisations are in desperate need of financial support, as they often cannot fundraise from already poor communities, and secondly due to exchange rates: money raised in the UK, Europe and North America goes exponentially further than it would in the donor countries. Over its 21 years of existence, Hospice Africa has raised over £3.5 million pounds, almost one quarter of which has come from the Hospice Africa charity shops in Ainsdale and Liverpool in the UK.

The development of hospice care in Africa

Following the cathedral service, supporters of Hospice Africa filled the pews of the Lady Chapel to hear presentations from Dr Anne and Professor Wilson Acuda, principal of IHPCA.

Together the speakers traced the conception and evolution of HAU, from requests for help from different countries in response to a journal article written by Dr Anne, to a feasibility study and the eventual establishment of HAU in Kampala with enough money for three staff for three months.

Since then, the organisation has grown to the model of hospice care that it is today, with IHPCA taking over the education portfolio, and the major breakthrough of morphine becoming legal in Uganda following tireless advocacy by Dr Anne.

Dr Anne introduced some of the patients who had inspired her work. She stressed the need for empathy and cultural sensitivity, saying that it was important to consider the health workers in Africa: “Looking at this pain and feeling that there’s nothing more you can do for it, it’s the most terrible thing. So we have to empathise with them.”

Prof. Acuda related the transformation of IHPCA from an NGO training centre to an accredited institute of higher learning able to confer degrees. He told those listening about the “enormous demand for teaching from across Africa,” and expressed his delight at: “face to face contact with the people I’ve heard about over the years who have been working so hard to raise funds to support the work that Dr Anne has been doing.”

Dr Robert Twycross, international pioneer of palliative care, closed the proceedings with a prayer commending the “Love in action” and “compassion with competence” characteristic of Dr Anne and Hospice Africa.