A Hospice in Grief: Tribute to Tom Duku 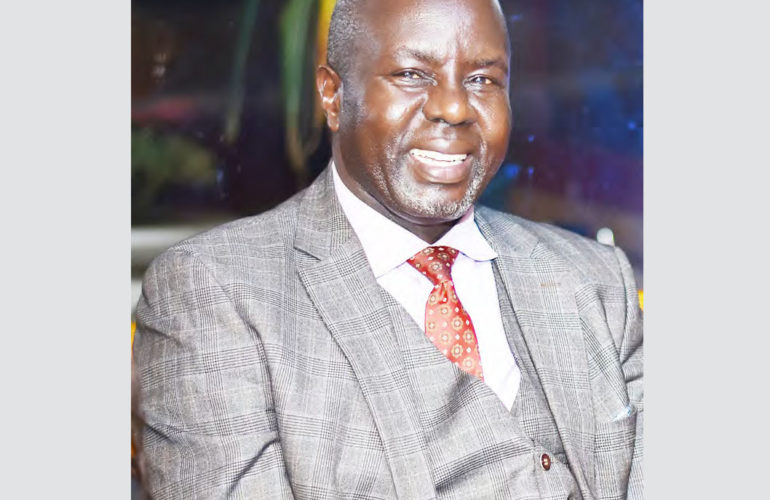 Uganda has a new surge of Covid19. On June 6th, the President announced a new 42-day lockdown, not so severe as the first, but enough to limit movement and to cause increased poverty in families with children, as schools are closed again, which means many children will fall behind by a year in gaining necessary qualifications, and parents who have paid school fees that were supposed to cover their food and upkeep in boarding schools, now have to feed their children within their limited means.

However, these control measures are all very necessary as there are very few families that have not been affected by Covid19 in this new wave.

During the first week of June, members of the HAU team got Covid19 infections for the first time. At the time of publishing this article they were recovering well. However, the Chairman of our HAU Board sadly succumbed to Covid19 the same week, bringing shock and grief to all who knew him and whose lives he touched.

A dedicated career in Palliative Care

Tom Duku came to HAU in 1995 as a young man, having completed a course in Ethical Accounting with a Christian organisation. He was our first and at the time the only accountant, and served at HAU for 9 years. Though he eventually moved to other organisations, he never lost his desire to assist the suffering and their families, which he showed by becoming an active member of the Palliative Care Association of Uganda (PCAU). He subsequently served as a board member of PCAU.

Tom was one of the most active of board chairpersons. He had a lot to share and give, and always a lot to learn. He arranged regular meetings with the CED and the Founder so we could work well together. The most difficult time for him and for the organisation was the present financial situation when, for 2 years, the organisation had a deficit budget for the coming year. It has been so difficult to meet the increased needs of our patients in a time of lockdown, when all our patients are at home or in hospitals. Sometimes we felt that the first Pillar of our ethos was being challenged from “The patient and family are the centre of all we do” to “Money is he centre of all we do”. Balancing the financial needs while keeping to our ethos has been a constant struggle, a struggle that Tom bore with us. 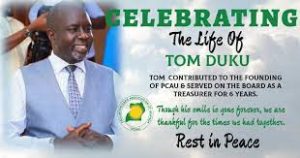 Most of us had not been aware that he had done a lot more work for the needy outside of palliative care. It was only during the 3-hour memorial service that preceded his burial that we got to know so many of the people he has helped through the Church, particularly young people. The HAU team had been present at his wedding to Faith while he was working at HAU, and knew them as a devoted couple with 4 children of their own, as well as 3 of Tom’s sister’s children whom they adopted when they were orphaned during the HIV era, before ARVs were available. These 7 children were heartbroken at the sudden loss of their dear “Daddy”.

Tom called to inform me that he had Covid on a Monday, and on Wednesday he commenced a 5-day course of Ivermectin combination. This treatment has had a miraculous effect on other cases, usually by the second day. But by then he was already having breathing difficulties and his oxygen level was down to 60%. The Dr decided to admit him to a private hospital, where they had limited concentrations of oxygen. They had a backup generator just in case the electricity supply went off. However, despite all the efforts made, his oxygen level went down to 32%, and on Thursday, he was transferred to the ICU in the major teaching hospital.

This is when his wonderful wife Faith said to me, “They have taken away my Tom, he now belongs to the managers of this hospital.” She said he was still strong when they brought him in, and he could not understand why they were transferring him to ICU, just based on the oxygen level. Tom died in the night but they did not inform Faith until sometime the next morning. What a lonely death! This Covid does not understand the needs of the dying person or of the relatives.

The news came to Hospice on Friday afternoon and the tears flowed. Everyone in our 3 hospice sites knew him as he had visited the 3 sites only 2 weeks before. Grief poured into our WhatsApp, emails and phone calls. None of us could believe that our very own board chairman, larger-than-life Tom, had succumbed to this disease. Letters and messages poured in from the different supporting agencies, our foundation (5 countries in 4 continents), and our board. 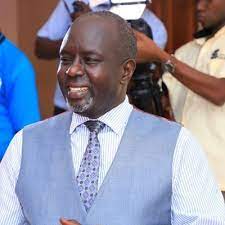 Covid funerals are fast. The funeral service was held in the All-Saints Chapel in Lweza at 9.00am on Saturday. The Church was packed, even breaking the Covid rules on spacing at times. 100 watched on zoom while 2,000+ watched on YouTube and Facebook. Tom was a very popular man who had helped so many. Each of his 7 children gave remarkable testimonies during the service. Faith was so brave and so strong as she talked of her beloved Tom for 15 minutes. The youngest child, a little girl aged 4, wandered around the Church and then flung herself back to her mum. She was a late arrival to the family as the sibling before her is 14 years old, and the eldest of the adopted children is 37.

The atmosphere in the memorial service was amazing, including tears, songs, and dancing! Even the Minister talked in a positive way and joined in the dancing. It was indeed a Celebration of his life, as each person took to the microphone, and explained what a difference Tom had made to their lives at some time or other.

Then, as is the custom, Tom’s body was taken to Nebbi, in the North West, where it rested a night near the family home, while they all kept vigil. The burial took place the next morning at 9.00 am in Arua, a district further North. This was a very distressful moment, as only strangers dressed in white PPE with a cross on the back were allowed near the grave. Only Faith, his wife was allowed inside the demarcation ropes as the sealed white coffin was lowered into the ground, accompanied by the loud cries of his children who loved him so much and could not bear to see or even believe that this had all happened within 1 week!

After the burial, they had to rush home as the drive from Arua to Kampala takes 9-10 hours, and they had to reach home before the curfew, which commenced at 9.00 pm. May God take Tom, his faithful servant to himself, and may God comfort his wonderful family.