Celebrating Partnerships and Collaboration as 2018 Draws to an End 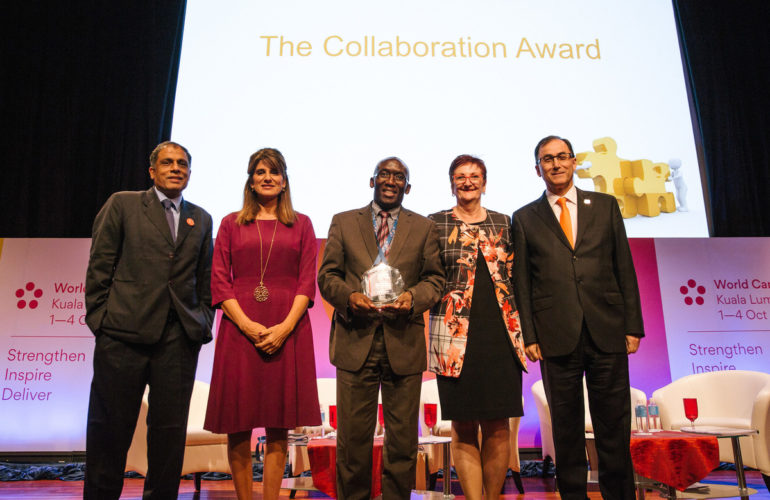 2018 has been an exciting year for us at the African Palliative Care Association together with our partners, members and collaborators. We have continued to attach great value to collaboration, as it enables us to achieve more with less resources, particularly during this period when funding for charity initiatives is dwindling; Collaborations facilitate mutual learning that leads to improved effectiveness and brings greater impact on the lives of the many individuals and families that desperately need health care and other social services.

This article captures APCA’s award-winning collaborative initiative implemented in 3 Southern African countries, i.e. Eswatini (formerly Swaziland), Mozambique and Zimbabwe. The initiative’s aim was primarily to support the implementation of national palliative care policies. Selected from a very competitive shortlist of finalists, this initiative won the Collaboration Award of the Union for International Cancer Control (UICC) in October 2018 in Kuala Lumpur, Malaysia during the World Cancer Congress.

It was one of the 5 awards given by the UICC in recognition of outstanding achievements and innovative practices across the UICC membership, organisations and individuals in categories that included: CEO, Advocacy with Impact, Collaboration, Fundraising and World Cancer Day Spirit.

The citation: For its engagement of a great variety of stakeholders, including grassroots, its measurable impact

in improving access and quality of palliative care services and its integration of legal aspects in advocating for palliative care as a human right issue. (https://www.uicc.org/uicc-award-winners-announced )

Implementation was largely through structured engagements between the African Palliative Care Association (APCA) and local partners in Mozambique, Swaziland and Zimbabwe and was funded by the Open Society Initiative for Southern Africa (OSISA).

More specifically, the initiative aimed to establish models for palliative care service provision through supporting Chibuto Rural District Hospital (CDH) in Mozambique and Raleigh Fitkin Memorial Hospital (RFM) in Swaziland to become palliative care centres of excellence. Other hospitals could then learn from them, thus facilitating scaling up the services. In Zimbabwe, the project aimed to initiate the integration of human rights and legal support into palliative care services. Project activities concentrated on awareness creation and capacity building of health care workers in Swaziland and Mozambique and lawyers in Zimbabwe over a one year period (April 2017 – March 2018).

More than 20 partners participated in the initiative at different levels and performing different roles. The ministries of health in all 3 countries were key role-players providing support to the project sites. The project hospitals (CDH and RFM) implemented the interventions at the local level with technical support from APCA. In Mozambique, our national level partner was the Mozambique Palliative Care Association (MOPCA); the Hospice Palliative Care Association of Zimbabwe (HOSPAZ) in Zimbabwe and the Ministry of Health in Eswatini. The project also leveraged the support of other relevant local partners in each country and in the region. In Mozambique, Douleurs Sans Frontières (DSF) was brought on board, given their efforts in improving access to pain control in the country. In Zimbabwe, Island Hospice & Healthcare provided a site where lawyers got first-hand experience of the legal needs of patients in palliative care. Seventeen legal organisations released legal staff for palliative care sensitisations and training. Subsequently, these lawyers later provided legal services to patients from 6 palliative care sites in Zimbabwe. The Palliative Care Association of Malawi and Hospice Palliative Care Association of South Africa provided guidance and linkages to the Palliative Care Support Trust within Queen Elizabeth Central Hospital in Malawi and the Wits palliative care within Baragwanath Hospital in South Africa where 8 trained health care workers from Eswatini and Mozambique were hosted for clinical placement, respectively.

As a direct result of these interventions, in Mozambique and Eswatini, palliative care services were strengthened both in hospitals and peripheral sites. From the training of 25 health care workers for CDH, the number of patients enrolled increased from 55 to 255 in nine months. In Eswatini the training of 41 health care workers in RFM resulted into an increase in the number of patients enrolled from 38 to 403. Through the sensitization of 40 lawyers and further training of 17 of these, a model for the integration of legal support in palliative care for patients and their families was established. The trained lawyers provided free legal services to 12 palliative care patients from 7 organisations, saving them the high legal costs. This approach provided a solution to the patients in need of legal services and an opportunity for lawyers to give pro bono services, and become voices for palliative care in their circles of influence.

Country partners were involved in all stages of the project, with a flexible approach that enabled adaptation of approaches suitable for country context. The integration of legal support in palliative care services in Zimbabwe was a new initiative following lessons from other African countries including Kenya, Uganda, Malawi and South Africa.

We are grateful to the UICC for the recognition of our efforts and for the ongoing support, and to all our partners in this initiative and in all our other work across Africa.

APCA is open to new partnerships in an effort to replicate and/or scale up this initiative in other hospitals and settings in the same countries and in new countries across Africa. Contact us on: info@africanpalliativecare.org