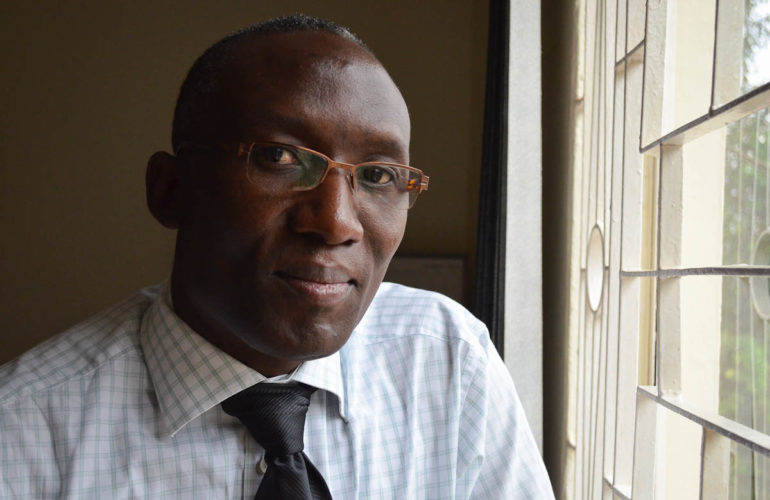 For Dr Emmanuel Luyirika, preparing for the work day is easy – his work feels meaningful and satisfying. The challenge he faces is deciding when it should end; differentiating between a personal commitment toward his passion for advocacy, and a commitment to his personal life at home.

His typical day as the Executive Director of the African Palliative Care Association (APCA) involves deciphering between mass amounts of email, engaging in numerous meetings, both informally and formally, and also thinking about the days ahead — reconciling between the resources necessary to address the overwhelming need for palliative care in Africa, both fiscally and in terms of manpower.

“What inspires me literally, is what is undone in the field of health care, palliative care, and more specifically HIV/AIDS and cancer,” Dr Luyirika says. “And so APCA formally provides me with the opportunity to contribute to the building of systems on the continent – health systems, capacity and research.”

A family physician by training, Dr Luyirika is a staunch proponent of evidence-based implementation, taking into account the unique needs of both urban and rural populations. He’s worked in both.

Starting his career as a medical officer in rural Uganda at Kagando Hospital, near the Rwenzori Mountains on the border with the Democratic Republic of Congo (DRC), he later moved to South Africa, where he worked at the Donald Fraser Hospital in Limpopo Province, after which he trained in Family Medicine at the Medical University of Southern Africa.

“There’s a lot of learning that happened during my years of family practice because I was dealing with the issues that affect human beings…I was also dealing with issues in which people were most vulnerable.”

Following his experience practicing medicine in a hospital setting in South Africa, Dr Luyirika decided to engage in public health administration and enrolled in a public management programme at the University of Stellenbosch’s School of Public Management and Planning. From there, he began to formulate a latent philosophy of organisational leadership in palliative care.

“I value taking decisions from a point of information rather than a point of speculation,” Dr Luyirika explains. To him, evidence is key. It is the catalytic force needed to drive change. Whether considering models of care or best ways to approach patients, Dr Luyirika emphasises that every palliative care approach should be premised on a knowledge and evidence-based agenda.

“There is no way as leaders we can divorce ourselves from being knowledgeable both in the scientific arena but also in the general information around us. That helps us to make evidence- based relevant decisions, especially since our decisions affect other people. The generation we are living in is a knowledge-based generation,” Dr Luyirika says.

With this view, Dr Luyirika has thrown his weight behind ehospice as a platform from which valuable hospice and palliative care information can be shared for the ultimate benefit of the patient.

To him, ehospice creates new opportunities for improved patient care through broader and quicker access to information, and therefore better understanding of issues affecting the palliative care fraternity worldwide.

“With ehospice — providers, promoters and patients are equally beneficiaries,” he said.

Teamwork and accountability
Upon his return home to Uganda, in 2002, Dr Luyirika accepted the role of overseeing the health care programme run by Mildmay International, as a Clinical Director, as overall Centre Director, and eventually as Country Director. He has since been actively involved in palliative care development both in Uganda and across Africa, assuming the role of Executive Director at APCA in August 2012.

Through the culmination of his health care management experiences, Dr Luyirika found teamwork to be a grounding pillar to palliative care, as with other fields of care.

“Teamwork is important, but it’s only viable if one is willing to learn within the team context and also transfer knowledge and skills to others to create space for them to learn as well…we need to be open to each other’s ideas around palliative care and any other form of care,” he said.

As someone who serves in a unique liaising role as the head of a pan-African organisation, one of the biggest challenges he believes the international palliative care community faces at the moment is the issue of individualism in programmes — people wanting to push their own agendas rather than the agenda of the people they serve. This brings us to Dr Luyirika’s core principle of management — the accountability factor.