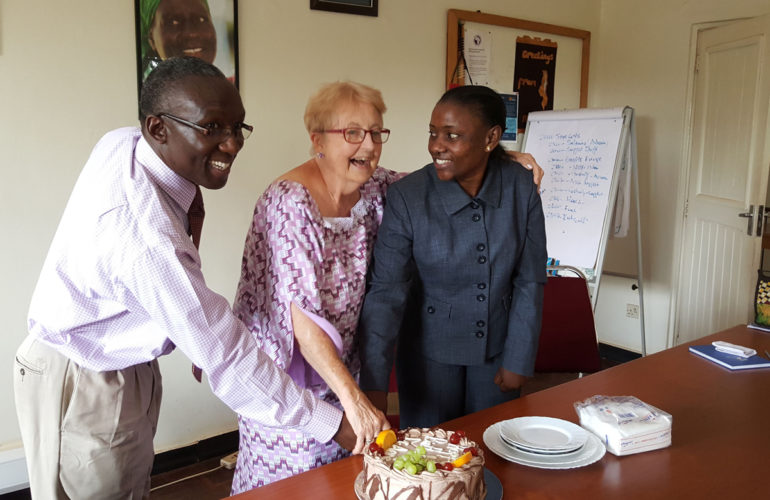 During her visit of the offices of the African Palliative Care Association (APCA) this week, Prof Anne encouraged all staff not to give up initiatives that could help others for fear of being old. She said that she embarked on the work in Uganda when she was already 58, an age at which most Ugandans are retiring. This followed similar pioneering efforts in Nigeria and Nairobi, Kenya.

Prof. Anne was instrumental in the establishment of APCA through a series of processes that started way back in 2002 and chaired its founding steering committee (From November 2002 – September 2004). She then served on APCA’s founding board of directors from 2004 to 2010. When APCA became a registered charity (Non-governmental organisation) in 2003, Hospice Africa Uganda hosted its first office in a car garage, before securing its own office in 2005.

“I did not envision the APCA I see today which has worked in collaboration with us to expand palliative care to more than 35 countries in Africa today. We have all learnt so much from you at APCA.”  Reflected Prof. Anne.

Prof. Anne has since been recognised by many local and international agencies including being a Nobel Prize nominee. Let us all join her to celebrate her 80th birth day but also in celebrating several years of service to humanity in Uganda, Kenya, Nigeria, Singapore and several other countries. The African Palliative Care Association also celebrates Prof Anne’s commitment to palliative care and her tradition of mentoring people wherever she has been including its own staff.

She has been so generous especially to Africa. Her hard work and inspiration continues to impact on the lives of many Africans. Prof. Anne currently heads the International Programmes at Hospice Africa Uganda, which is instrumental in educating health care providers from the various African countries on palliative care, including its practical delivery. She is also focusing on building knowledge and skills in French Speaking Africa in collaboration with many partners including APCA.