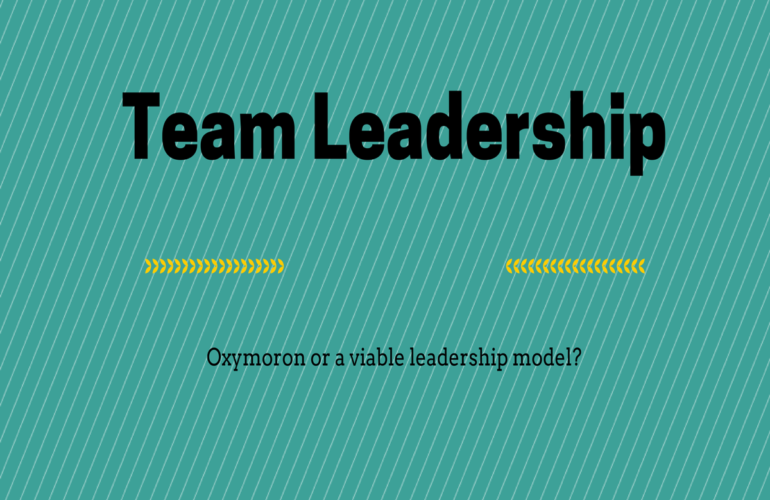 The terms – ‘team leadership,’ ‘chief executive team’ may sounds like an oxymoron. And yet, this leadership approach can work well and bring benefits to a palliative care organisation and each team member’s development.

In African management settings, where the ‘big man’ so often creates problems and offers opaque management, this can be a refreshing way to bring the well-documented, recognised collaborative and egalitarian modes of grass roots’ enterprises and cooperatives to the board room. This concept is operating, with success in all sectors; commercial, housing, charity, not-for-profit as well as palliative care.

In leadership teams – which many organisations are familiar with, with however much collaboration they purport there may be, the buck stops with the CEO or Accounting Officer.  When there is mischief afoot, all CEOs know how vulnerable they can be, even though there does not need to be mischief for the role to be a lonely one.  However collaborative a style a CEO has, inevitably, the buck absolutely stops at their door.

An alternative model of leadership, that is of a team leading the organisation, can be an option for a short period or longer term. It is a challenging concept and not for the faint-hearted both for those taking on the role as well as for the board supporting the implementation of that model.

Dynamics of the team leadership model

What this model offers is a cost-effective way of ensuring that more than one person knows all that is going on. There is safety in ensuring that all perspectives are properly considered, particularly when strategic decisions are being made. This model reduces the ‘silo mentality’ that pervades most organisations where the impact of decisions are not thought through and support services (such as human resources and/or finance) have to pick up the pieces and work hard to minimise the fall-out.

The decision-making process inevitably take longer, particularly at the beginning – one person can easily make decisions based on the information they have at hand. However, for three or four people to come to a major decision, there is more discussion. These decisions have every chance to be more sound, and decisions are more likely to be made with ‘eyes wide open’ on the fall out that is likely to happen. Team leadership can plan ahead when such is the case rather than deal with the consequences in real-time, which is so often the complaint against management.

Through this model, the expertise behind key organisational functions each team member offers in their leadership is already in the room and can these perspectives can be drawn upon with immediacy and thereby curtail many half-baked decisions.

Where there is not a lot of experience of leadership, yet clearly potential in key individuals, with mentoring on collaborative practice, the adage of the sum is greater than the parts, and comes into play as all gain from the experience.

However, as stated at the start of this article it is a challenging concept.  In its implementation, the majority of frequently asked questions are to do with communication:

·       How do you balance directorial function and chief executive functions?

The first four questions, interestingly, are questions that also get asked in single-person leadership organisations because, communication is always an issue in organisations — occasionally too much, invariably too little, sometimes inappropriate levels of communication, and often partisan communication.

This model cannot work without members having:

·       A willingness, readiness and ability to work with freedom and responsibility

·       A willingness to work explicitly with issues of power, authority, and gender

·       An interest in development of self and other

·       The ability to offer ‘tough loving’ – the ability to challenge and confront whilst being supportive of the individual and the organisation!

Of course, those within the organisation, and those outside the organisation may have concerns and unwittingly undermine the practice of team leadership.  It takes consciousness and intentionality for this model to work well.  And it has worked – there are growing numbers of organisations in different sectors that are trying out this model; there are many more who are thinking about it and talking about it.

It is exciting; it is rewarding; the depth of trust in the working relationships deepens; it is also demanding and challenging.  Team leadership changes the culture within an organisation – where it is embraced and allowed to flourish as a collaborative practice, individuals are taking initiative, creative solutions abound; morale and job satisfaction all increase for the majority.  This model lends itself well to dynamic, complex organisations, particularly what Charles Handy described as ‘matrix’ or Athenian organisations where being egalitarian is valued.

As an OD consultant who has experience in team/peer leadership in three different sectors, I would emphasise that, it is not something to be undertaken lightly; there is need for a depth of understanding of what this leadership model needs to work well.  The strengths and weaknesses of each member need to be well-known and made explicit to the individuals, the leadership team and the board so they can be worked with and easily spoken about.

Mentoring is necessary as mistakes are made and the process is rich with learning.  It is demanding of the persons inner resources of resilience; ability to stay engaged, to work with conflict and operate at a higher level of consciousness.  An embracing of live self and peer assessment processes is crucial and is a foundational stone for this model.

Whilst hospices in the UK in the past had a largely unhappy experience of tripartite leadership, it was at a time when there was less emphasis on personal and professional development and awareness; there was less understanding of what it takes to work in collaboration and in partnership.

In today’s era, much has been learned about working in collaboration and in partnership, and much is still to be learned. And, with a spotlight on learning, coupled with reflective practice and the support of a board who is keen on the team’s development in practice; this is a model of leadership that is a viable and increasingly recognised alternative for hospices, palliative care units and beyond.

For further inquiries into the team leadership model, contact Zena Bernacca at zbernacca@hotmail.com.