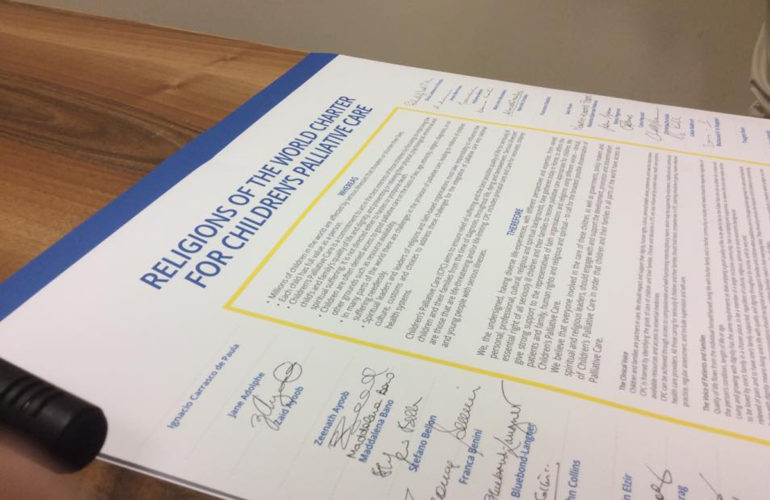 The group gathered together in the Vatican City to share their knowledge, thoughts and recommendations for the drawing up of this unified statement. It is hoped that it will strengthen the global consensus on the protection of life in all conditions – especially in children with life-threatening illnesses.

A key aim of the statement is to highlight that paediatric palliative care, which promotes dignity, worth and the best quality of life possible, offers the most appropriate solutions to the complex needs of children with life-limiting and life-threatening illnesses and their families.

“Recognising and learning from the spirituality of a child is important, not only for the child, but also for the health carers own spiritual development,” said Professor Dr Anne Merriman who attended the meeting.

The international closed workshop: ‘Defining the Essence of Palliative Care for Children: Religions Together’ was held at the Pontifical Academy for Life in the Vatican City and organised by the Maruzza Foundation in collaboration with the Pontifical Academy for Life. At the end of the day’s work, the ‘Religions of the World Charter for Children’s Palliative Care’ was presented and signed by all those present.

Chief Executive of the International Children’s Palliative Care Network (ICPCN) Joan Marston, who was present at the closed meeting, said: “ICPCN research indicates there are more than 21 million children needing palliative care globally – with less than 1% receiving it.

“To reach these infants, children and young people requires a collaborative approach; an understanding of the essence of children’s palliative care and a desire to protect the child’s right to receive this.

“Even when palliative care is available and accessible, spiritual care is often ignored or misunderstood. Faith organisations are essential partners in palliative care and often reach into even the most remote areas.

“From these rich discussions, a new Charter was developed calling on all faith and religious groups to declare that children’s palliative care is the right of every child facing serious illness – life-limiting and/or life-threatening.”

ICPCN was represented by Professor Mary Ann Muckaden from India; Chairperson, Dra Rut Kiman from Argentina and Joan Marston, CEO, from South Africa. ICPCN  presented Pope Francis with a book on his favourite football team, information on children’s palliative care and a picture from a seriously ill Argentine child; and will be working with faith groups and the Fondazione Maruzza to disseminate and promote the Charter as part of the global advocacy for children’s palliative care.

Blessing from the Pope
At the General Audience with the Pope the following day, Pope Francis blessed the children and families who had attended the meeting and welcomed the palliative care community to the Vatican.

ehospice will share the Charter with its readers once this has been made available to the general public.

An original version of this article originally appeared on the International Children’s edition of ehospice.