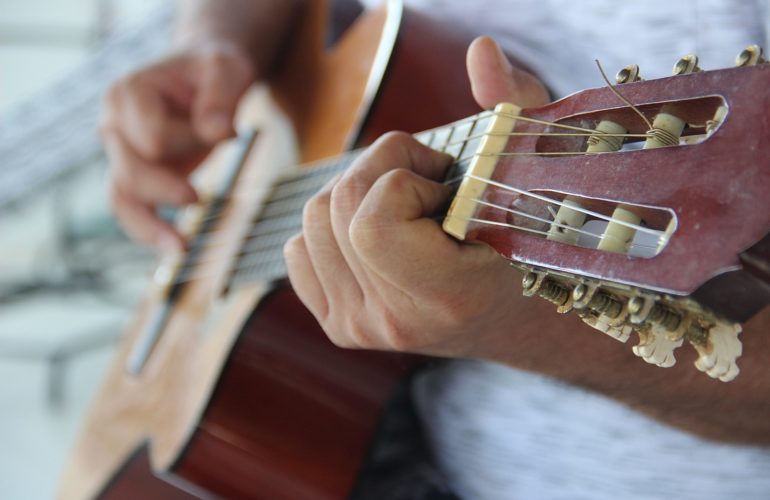 Whether you’re listening to a favourite song that transports you back in time, or making it—music can have a profound impact.

That’s certainly the case for John Steele, who picked up the guitar after a long hiatus. John is a big fan of country music, particularly the songs of Johnny Cash and George Jones. Now, thanks to music therapist Jill Murphy, John has released his first CD, honouring the styles and songs of his favourite artists.

Jill works with Hospice Cape Breton, and brings music into the lives of palliative care patients at home or in hospital. Soon, she will be doing the same in our community’s 10- bed hospice now being constructed. Jill learned about John and his love for the guitar through palliative care nurse Susan MacKenzie, who also advised that John’s favourite song is “I Saw the Light.”When Jill paid

John a visit, she asked him if he would like to play. Initially, John was reluctant, it had been a while. Jill advised she would bring another guitar during her next visit, just in case. Luckily, Hospice Cape Breton had bought a guitar for a patient several years ago. When that patient passed away, the family donated the guitar back to Hospice. So, Jill brought it along and John was able to play once again.

“I just don’t have the words to thank everyone enough,” says Patricia.

She feels the same way about the Palliative Care Service and the support being provided to both she and John.

“Everyone who comes here is so kind. They answer all your questions which is so important because it can be overwhelming when you’re looking after someone who is sick.”

Patricia says when Jill pays a visit, she has an opportunity to do her own thing, knowing that he is enjoying his time playing tunes. Jill says she was able to build a relationship with John through music, and very much enjoyed listening to him play and tell his stories. During one of her visits, she decided to start recording John, and subsequently put together a CD with a collection of 12 songs.

The cd is titled “Jammin with John” and is already a favourite of John’s family, particularly his five grandchildren.

When Jill brought the CD to John, she did so with balloons and several copies for give-aways, befitting any cd release party, and revered country artist.

“I think it’s beautiful,” says Patricia. “The support we receive not only helps John, it helps me. And, we are very proud of the CD.