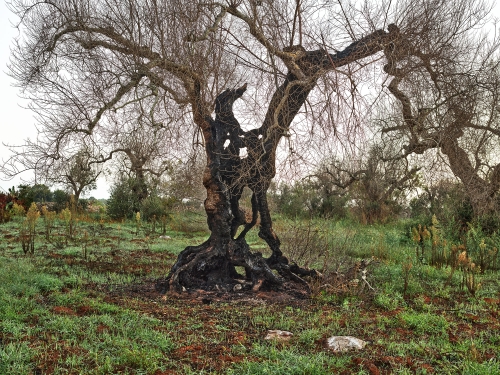 This article was originally published by the McGill Council on Palliative Care on September 12, 2022.

Ed’s photography shows both the immense beauty of the world and what we as humans have done with that beauty, his subject matter always teetering between life and death. His wife Julia Johnston, a self-described serial entrepreneur, now works with him to bring his artwork to new audiences.

I first connected with Julia regarding our mutual interest in palliative care. After experiencing in her own life the enormous benefits of the field, she took a course and became a volunteer for both patients and their families in palliative care. As we knitted our art lives together with our passion for greater access to palliative care for all, we both agreed that art had an important role to play in end-of-life issues.

I had already decided to curate an exhibition of works by some of Canada’s most prominent artists whose work dealt with life cycles in some way when Julia told me that Ed had been working on a new, not-yet-seen project about the dying olive trees in Puglia, Italy.

I was immediately intrigued. I live in Puglia and have seen the devastation firsthand. Seeing the olive trees and their venerability and also fragility makes the connection to our very own vulnerability almost unavoidable. These majestic trees often appear anthropomorphic and Ed’s images intuit that, and therefore create an empathic connection for us between the natural world and our human-centered one. Now seemed like a good time to have a conversation with both Ed and Julia about endings and climate change.

As artists we ask ourselves time and again, how we represent difficult subjects, frequently finding ourselves locked in a battle of values as we look at horror through a lens of beauty. I know Ed has struggled with these same questions. His images of quarries or the shocking orange rivers of nickel tailings (waste produced during the leaching of nickel) are staggeringly beautiful, even as they pose the nagging question: “Do I keep looking or do I look away?” Ed’s images provoke these complex feelings as he explores the haunting beauty of our destruction of the natural world, echoing what may be humanity’s greatest dilemma as we move between our desire for things, and our awareness of the consequence of those desires.

Many years ago, working on an installation dealing with apocalyptic narratives, I saw how prophecies of endings can be revelatory and also promise new beginnings. A detour into Tibetan Buddhism allows us to contemplate a cycle of life rather than a straight line of life to death. It’s not so much about an “afterworld,” as it is about creating an opening that allows us to imagine beyond binaries and linear narratives. This struck me as deeply important when approaching Ed’s work, which enables us to hold both the beauty and the horror in our minds simultaneously because, to put it simply, life is complicated and any consideration about our collective doom must also present the possibility of a future, or at least a cycle of some sort.

And where better to visualize these cycles than in these olive groves? While we expect all life to have a natural ending, these ancient trees have always appeared timeless and yet had come to their demise as a result of Xylella — a deadly bacteria that arrived in 2009 with coffee plants exported from South America to Italy. It was this devastation wrought on approximately 12 million trees that Ed was commissioned to document.

The importance of olive trees in the region goes back two millennia: Aristotle’s Athenian Constitution laid down that “anyone who digs up or cuts down a sacred olive-tree… is to be put to death.” Maybe we could modify that to a life sentence for the perpetrators of Big Oil!

Ed described walking through the groves of dead trees “like walking through a battlefield after the war.” To recreate his experience, and enable others to see the living death he saw, he took 3000 images of one 1,800-year-old tree – a tree as old as Aristotle’s Constitution – to enable him to reconstruct it in 3D.

I asked Ed about what he would like us to take away from this kind of immersion and more generally what he hopes to teach us through his work. “I think a lot of art tries to convert ideas into something that people can experience. And I think one thing that’s necessary for people to take on the kinds of issues that we’re facing, is to feel them, to feel empathy towards something. The character I want everybody to empathize with is the natural world; it’s all the things that are being pushed back, it’s the forest, it’s the oceans, it’s the wildlife, it’s all the other things that we share the planet with, that are being diminished. When a house is built you don’t really think about the fact that that was an ancient cedar tree that was cut to make your deck. I think the idea of being able to stand in front of a work and become emotionally affected opens a door. I hope they start to think about what they can do with these feelings. I think the role of art can actually go a long way to make you aware that something very dangerous and detrimental to all life on the planet and the future is fragile.”

Showing these works and others at the McGill International Palliative Care Congress is intended to achieve two things. First, connecting the medical world and the art world to bring new perspectives to end-of-life issues, and secondly, and more broadly, to enable these majestic and intricate works by Ed Burtynsky to create a shared sense of humanity and empathy.