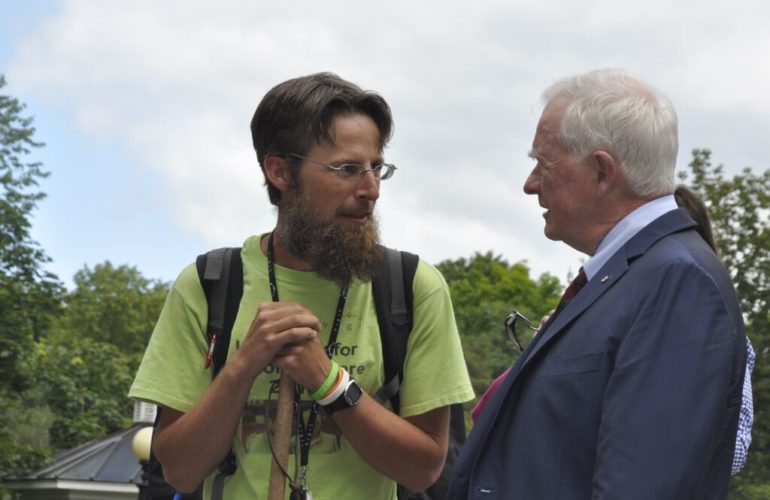 Before reaching Ottawa, Ian had spent many days in local villages in Quebec, along with major cities like Quebec City and Montreal. Sharing his experiences, Ian was shocked at the hospitality he received while there. “One family picked me up off the side of the road and brought me to their house to wash my clothes and give me a home cooked meal… Even though they didn’t speak very good English and I couldn’t speak French, they made me feel so comfortable and at home. I will never forget the kindness that I received in Quebec.”

Ottawa proved to be a very busy stop along his journey to Victoria, British Columbia. While in Ottawa, Ian met with CBC Radio for an interview, held a meet-and-greet at the Maycourt Hospice, met the Governor General, as well as meeting Canada’s astronaut, Chris Hadfield. At the Maycourt Hospice, Ian spoke with such heart that the whole room filled with inspiration and a belief that he would finish this long journey across Canada. “At first I thought of this [journey] as a pilgrimage, but now I think of it as a crusade,” said Bos.

Ian also met with Chris Hadfield at the Gatineau Airport’s vintage hanger where they sat and chatted about palliative care and Ian’s journey so far. “Meeting Chris Hadfield, [a personal hero, and inspiration] was a really neat experience,” stated Bos. The highlight of this meeting had to have been the personal tour of the hanger and all of the planes featured on the grounds. Just when we thought the day couldn’t get any better, we were lucky enough to watch as the Snowbirds completed an aerial show before landing at the airport. “Today was an incredible day for hospice palliative care awareness,” said Bos, “all I can do from now on is hope that all this attention gets picked up by national media to spread hospice palliative care awareness.”

Ian’s visit to Ottawa was one that I will remember for a long time. Ian is a man full of courage and hope that all Canadians can have the type of healthcare that his father received. If you happen to come across Ian along his journey, stop and have a chat with him. Canada is a large country to walk alone.