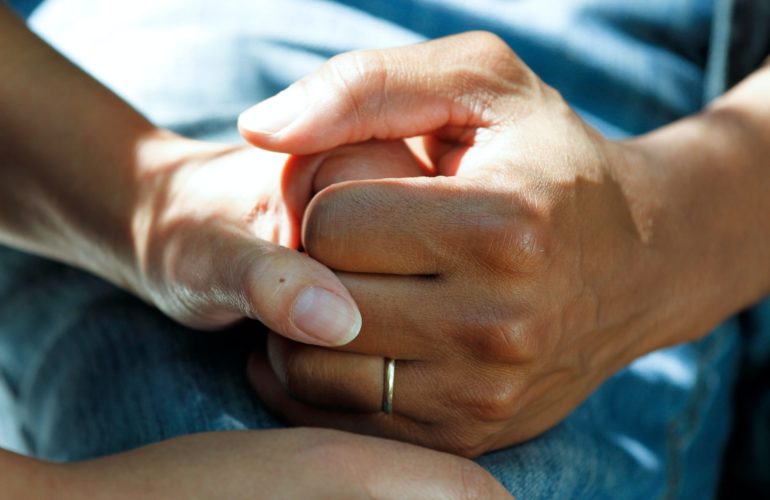 Article from CBC with files from Adam van der Zwan and Daybreak South.

After battling cancer for eight years, Aimee Taylor, who lives with her wife and daughter in Vancouver, says heteronormativity and discrimination still permeate the health-care system for LGBTQ people, especially in palliative care.

“I’ve had social workers ask if I have a supportive husband at home … and even one that wasn’t sure how to fill out forms because I was married to a woman,” Taylor told the CBC.

Canadian Virtual Hospice says it is filling the gap with a collection of online resources, called ‘Proud, Prepared, and Protected to help the community navigate its palliative care needs.

The materials include a step-by-step guide for planning care with family members and health-care providers, a form to record personal health-care information and preferences and an extensive Bill of Rights for community members with late-stage illnesses who are facing the end of their lives.

Executive Director Shelley Cory says more than 100 community members, including many from B.C., and more than 40 organizations contributed hundreds of hours to address this need.

“The health-care system commonly underserves people who identify as Two-Spirit and LGBTQ+, and there were no resources tailored to their palliative care needs,” she said.

Susan Cadell, a social work professor at the University of Waterloo and a contributor to the project, said people in the community “have the added possible issues of worrying whether … their health decisions will be accepted or their chosen family will be accepted.”

Taylor said that each time she visits emergency, health-care workers regularly assume that her wife is her sister or friend and that it’s even noted in official documentation.

“We point it out each time,” she said, “and their reaction is ‘oh, it doesn’t really matter. We just have to put something down.’ … (But) language matters and our marriage matters. It just wouldn’t have happened if I’d arrived with a man.”

Cadell said there’s also the issue of people being misgendered or their pronouns being used incorrectly after death by family members who may not be accepting of trans people.

“It’s hugely upsetting for the folks who do accept that person,” she explained.

‘LGBTQ people should plan ahead’

Taylor said the new online resources are “fantastic,” and include documents that people can take to the clinic or hospital to help health-care workers understand and respect a person’s core relationships and decisions.

“I would encourage everybody, whether they’re sick or not, to look at these tools,” she said, adding that she encourages middle-aged LGBTQ people to think ahead and plan for their end-of-life care, even though death is “such a taboo subject.”

Taylor said she’d like health-care workers to be more comfortable just asking patients to clarify their familial relationships, if they find them confusing, and to not assume they know what those relationships are beforehand.