She knew palliative care. Then it hit home. 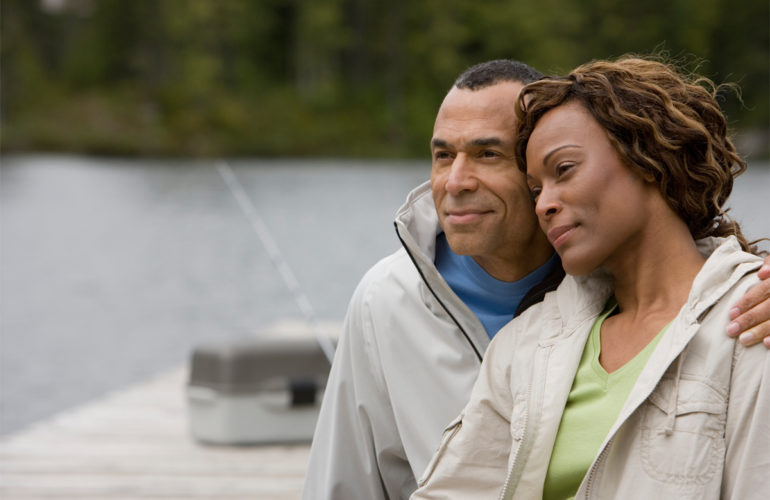 It was about living.

She knew people related it to end of life and that it scared them.

Colleen Bredin is a nurse practitioner in urgent care response at the Walker Family Cancer Centre. She sees people with unmanageable symptoms. Pain. Nausea and vomiting. Constipation. She strategizes a plan, in consultation with a palliative care physician, to alleviate the problem before the person has no other option but to go to the hospital’s emergency department.

She listens. Hears their story. And once the crisis recedes, she encourages them to live life again.

“They can focus on living whatever remaining time they have,” she says.

Palliative care has been her passion for years.

She thought she knew it.

And then it came into her own home. Her own life.

And the word scared her.

Five years ago she was sitting alongside her husband, Craig Bolton, in a room at Juravinski Hospital, listening to his oncologist discuss treatment options. Craig has cancer — Hodgkin’s lymphoma — and he had already been through several treatments. Chemotherapy. Radiation. More chemotherapy and a stem cell transplant.

And it kept coming back.

This time he had found lumps in his left shoulder, and then after more radiation, another lump appeared on the right. It seemed to be spreading.

They were speaking to the oncologist about the next options when he used the word.

“I have a palliative care patient …” they remember being told. The doctor shared a story about a patient who had cancer and had gone to university. Lived 10 years.

“This was the first time someone directed it at me.”

She felt a gripping fear, then deep sadness.

“I think I thought deep down it meant of life.”

Even though everything she knew about palliative care told her otherwise, the impact of the word still felt like death.

“That was a pivotal, existential time,” she says.

After finishing her degree in nursing, Colleen was working for the Victorian Order of Nurses in Niagara. She visited patients in their home and was often faced with helping people who were in pain, or who were dealing with other symptoms due to advanced cancer. Vomiting. Nausea. Diarrhea or constipation. Lethargy.

While it was not everyone’s choice to remain at home, Colleen was determined to help the ones who did, achieve their goal. And that meant helping control their pain and relieving suffering.

Treatment had ended for most of these patients and they were tired of the back-and-forth trips to .

“There was a comfort to being at home,” she says. “And a sadness at not being able to be there.”

She kept up to date with advances in home palliative care around the province. A better understanding of the needs of people at the end of life was driving the early creation of specialized medical teams, experts in pain and symptom management. She travelled to Toronto and met June Callwood, who had founded Casey House, a hospice for people living with AIDS.

At the same time, she was becoming more and more frustrated.

Many of her end-of-life patients were suffering. In unmanageable pain, but wanting desperately to remain at home. She could not prescribe medication, so she would call their family physician or oncologist, asking to try a different drug or adjust the dose of a pain med they were already taking.

There were many doctors who did not return her calls. And others who simply told her there was nothing more they could do. Maybe they were too busy, didn’t receive enough training in palliative care in medical school, or were reluctant to prescribe a drug sight unseen. If one doc couldn’t help, she’d try another. “It took a lot of time and perseverance,” she says.

The result was predictable. When the pain became unbearable, her patients would go to the ER.

“There was a despair from patients who didn’t want to go to the hospital,” she says.

Meanwhile, Colleen had met another VON nurse, Audrey Rows, who shared her vision for specialized care for patients with complex symptoms. They talked about starting a hospice in Niagara.

Indeed, it was three nurses — Colleen, Audrey and Pat Hundertmark — whose efforts and insight led to the creation of Hospice Niagara in 1993.

They had envisioned a residential hospice. A place where people could go at the end of life to die in comfort and dignity.

But palliative care was in its infancy and old attitudes were pervasive in the community.

“There was an undercurrent of fear,” she says.

Concerns included increased traffic, possible dangers posed by AIDS patients and the psychological impact of living near the terminally ill. People were blunt. They didn’t want to see bodies being removed. And they worried that bags of garbage filled with syringes would be left curbside. Their children would be put at risk.

A story in The Standard quoted one neighbour: “I didn’t grow up beside a house harbouring dying people. I don’t want my children to.”

Another neighbour suggested the hospice be placed in the country: “Five or six acres out in the corn.”

Reluctantly, the couple withdrew the offer of their house to Hospice Niagara.

“It was before its time,” says Colleen. “We had to realize and respect that.”

And yet, her vision remained strong.

By then, she had become palliative care co-ordinator at Hotel Dieu, working alongside Brian Kerley — a family physician who would eventually become Hospice Niagara’s medical director — in an 11-bed palliative unit. Sister Louise Dillon was part of the team for psycho-social support.

They offered leading-edge pain and symptom management, she says. When patients were experiencing pain so excruciating that offered no relief, they were offered pain pumps and epidural nerve blockers.

All done, to relieve suffering so patients could return home.

“When you take the physical pain away, people are able to think about the future beyond their current situation,” she says.

“It empowers people to live again for whatever time they have left.”

All the while, she volunteered her time writing grant proposals for hospice funding.

Eventually, it paid off. The Ministry of Health offered funds for public education and volunteer development. Hospice Niagara had hired its first executive director who took up the torch that had been carried by Colleen and many others.

Colleen was able to back away from the intensity of advocating for but remained on its board directors for a decade. She pursued education to become a nurse practitioner and working in a family practice with Kerley.

It was an experience that offered her insight into palliative care from the other side.

“I understood the challenges,” she says.

Doctors genuinely care. But many have not been taught how to talk about palliative care, death or end-of-life care with patients. They are not experts in the complexities of pain. And they are busy.

In an ideal word, people would be referred to a palliative program early on in their illness journey. When symptoms can be relieved, and more living can be done, she says.

But the very word is often the biggest obstacle to the good it can do.

A word with an identity crisis.

A truth never so clear to the day she sat in the oncologist’s office with her husband. And heard the word herself.

Soon after the couple made a life-changing decision — that Craig would be a part of an immune therapy drug trial at Princess Margaret Hospital.

The bumps are gone, he feels alive and it’s given them more than two years of stability. His one “battle wound” is an intense pain in his left arm, despite the fact that he has no feeling in his arm due to nerve damage from radiation.

He goes for treatment every two weeks. And he continues to see Kerley — the palliative part of his journey — to help reduce the pain in his arm.

He thinks about cancer every day. And there are moments when it surfaces close to his heart. With any unexplained twinge comes that it has returned. He once explained to a friend, who offered him small tree shoots to plant: “I don’t have enough time to watch that tree grow. I have to buy the big tree.”

And yet it’s been good, too. Life is amplified. The couple has bought a house on the lake. They have travel plans. He bought a Jet-Ski and had the controls modified so he can use the gas and break with one hand. He looks at trees differently.

“Sometimes you look at them and think, I might not see them again,” he says.

“I don’t want this to go away.

Colleen navigates a new world, too.

“He’s been though so many relapses, now I just stay vigilant. I don’t let my guard down,” she says.

“It takes a lot of energy to get your guard back up and deal with disappointment.”

At work, personal has deepened her professional understanding. She has more empathy. “I try to be more in the moment,” she says.

“When I see a patient, I feel we have one chance to do things right.

“If someone is at the end of their life, you can’t go back and do it again.”

Her inner voice guides her with words she first heard from Kerley.

“If you look in the mirror and ask, ‘Did I do the best thing, do I do the right thing?’” she says, “you want to say yes when you look back at yourself.”