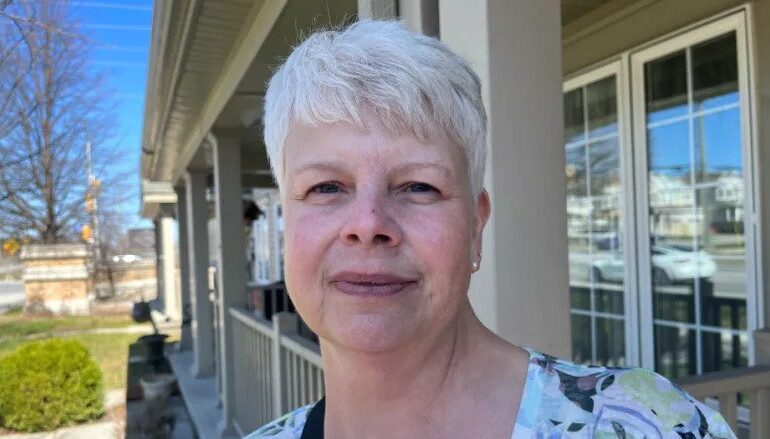 This article was originally published by CBC on May 5, 2022.

“I’m one of the very lucky people who gets to actually love what they do,” said Vernon, the long-time behavioural therapist at The Ottawa Hospital.

Vernon also loves to bring fun to work — which she describes as “so stressful” — like spearheading impromptu Zumba sessions at the nursing station.

Then in September 2020, she received a diagnosis of metastatic pancreatic cancer.

Vernon, 54, has seen her cancer reach stage four, which means there is no cure, just treatment.

“It has nothing to do with me. I just got to be one of the chosen.”

Dr. Christine Whetter is Vernon’s palliative care physician, one who has become an advocate and a friend to a patient she describes as “full of life and energy and joy and passion.”

Even on the difficult days.

Vernon now uses a hydromorphone pump to help control the pain. Despite an initial prognosis that she had six to nine months to live, she planted tulips with friends in 2020 and was there to see them bloom last spring.

Last fall’s bulbs have also now sprouted: “It showed me my journey is not done.”

Vernon set herself another goal. A passionate fan of singer-songwriter Chris de Burgh, she was delighted to learn he was coming to Ottawa for a concert on April 20.

She and her husband scored tickets and Vernon was determined to make it to that concert, even if it meant attending the concert in a wheelchair. But COVID-19 forced the artist to postpone until next spring.

This concert — like planting tulip bulbs — had been an important “target goal” that was now out of reach.

Then Whetter went beyond medical care to find a solution.

“The thing that Christina needs most today is actually not any changes with her pain medication or to talk about bowels or to talk about hydration,” said Whetter. “She needs Chris de Burgh.”

Whetter attempted to reach out to de Burgh. She joined a virtual fan club, and sent heartfelt messages that relayed one of the singer’s most ardent fans was running out of time.

‘I’m not going out without smiling and laughing’

Vernon grew up in the ’70s and ’80s and said the soundtrack to her life was de Burgh’s Lady in Red and Patricia the Stripper. She learned calligraphy by copying out the lyrics to his song Lonesome Sky.

When an email from her idol arrived with a very personal video message, she was undone.

“I opened the email. And there’s Chris de Burgh! He was smiling. I pressed play, and he said, ‘Hello Christina.’ I was, like, he’s talking to me!”

In the video, which lasts almost four minutes, de Burgh explains why the Ottawa concert was put off. He apologizes to Vernon and then performs versions of The Lady in Red and Patricia the Stripper.

Vernon says she started singing along, laughing, crying and clapping along, and shouting out, “Woo-hoo! It’s Chris de Burgh!”

This, too, is medicine.

“If you have only six months or nine months, you can spend that time thinking about dying and regret and loss, or you can live,” said Whetter. “Christina has been living — and she is going to live every day to the fullest.”

“I have a good life. I have love. I have support, and I’m happy. Yeah, I know I’m near the end. So what? God or somebody wants me for something. But here I am,” said Vernon.

“I’m not going out without smiling and laughing.”

Vernon, who also has a 17-year-old daughter, is planning her own wake and funeral. Chris de Burgh’s music will be part of the celebration of life.

She has replayed de Burgh’s video message more times than she can count, she said.

“Take care. Lots of love and hugs from me. Bye for now,” de Burgh said when signing off, leaving Vernon in tears.

“Isn’t that beautiful? Such a gift,” she said.