The Room to Room Program (R2R) 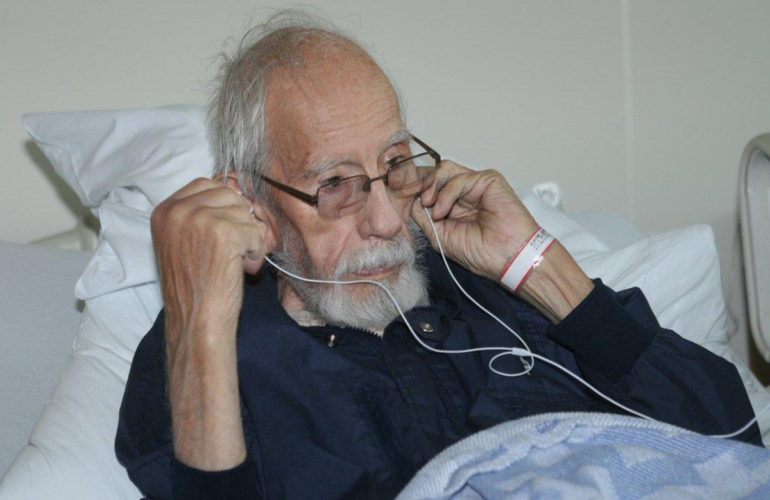 Here are 10 ways R2R participants are introducing and integrating Room 217 music in end of life care. The comments have been reported by HPC facilities participating in the R2R program (as submitted by Debbie Devitt, R2R Program Facilitator).

1. For release, closure and comfort
Spirit Wings was played while staff sat with a client overnight – she was soothed by the music and she died while Footprints was being recited.  All of the staff members who experienced this individually spoke to me afterwards and explained how powerful this experience was.  As the resident was dying they encouraged her to “let go” and they guided her to focus on the songs that were very meaningful to her. The music brought some ease and comfort to a very difficult night.

2. For reminiscence and enhancing communication
Volunteers have found the Room 217 CDs very useful in communication with clients facilitating discussions around memories triggered as they listen to the music.

3. For soothing relaxation
One elderly gentleman, who was at end of life, very much enjoyed the CDs. He and his wife said they helped to take the worries away. They were able to sit and hold hands and quietly let the music soothe them. Another bereavement client enjoyed several of the CDs as she sat quietly at home by herself. She said they brought her much comfort and relaxation.

4. For companionship on the journey
Loneliness was eased by a dying patient who was semi-comatose and alone.  The only physical response was noted on repositioning.  We brought Room 217 CDs to her and noticed her toes tapping to Gentle Waters.   We changed the CD over to Old Chestnuts and her hands kept time to the beat despite severe apnea. We asked if she liked the music and she nodded yes.  She lived three more days with music as her companion.

6. For distraction
One client became very obsessed related to his diagnosis with the shopping channel and was buying everything that was advertised so we were blocking that channel. Then he would become very agitated with commercials. We suggested to his family that we could put on the Recollections DVD which brought him much comfort and peace at the end of his life as he was very involved in his life in nature. His family was very grateful and he would often look at the DVD in the last week of his life.

In another situation, one of the clients (pediatric) was going through a medical situation causing insomnia, pain and an increase in seizures.  The music was put on for him which allowed him to rest (unfortunately unable to sleep) and redirect his attention to the music and off the pain and discomfort he was experiencing.

7. For program support i.e. bathing
We have implemented the Room 217 music care resources in our bathing program for our day hospice clients and they really enjoy it.  They state it helps relax them and get in to a peaceful space.

8. For de-stressing caregivers
One Program Director plays the Room 217 music in her office while completing bereavement follow up calls. She finds it very calming and has noticed a difference in her experience when making the calls.

9. For regulated breathing
The client was in advanced stage of palliative care. I played live music for him which helped regulate his breathing. I setup the client’s son with a couple CDs from the Room 217 collection that would be comparable to the live music I played. The client’s son stated that he noticed a difference in his father’s breathing.

10. For reflection and meditation

Bev Foster is the Executive Director of the Room 217 Foundation, a registered Canadian charity dedicated to caring for the whole person with music. www.room217.ca.