What Art can offer End of Life – Elle Flanders 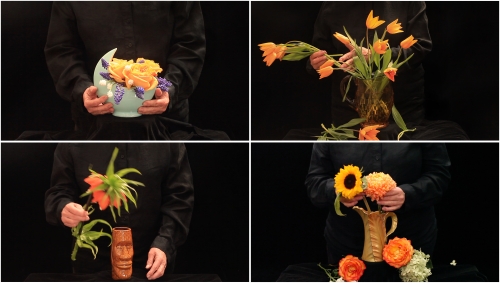 An exhibition consisting of works by some of Canada’s most significant artists as well as some of the most promising emerging artists, will take place during MIPCC from October 18-20th at the Palais des Congres.

Over the past two years I’ve been immersing myself into the work my mother initiated on palliative care.

After she died, I couldn’t bear the thought of all the energy she had put into creating awareness around palliative care just dissipating.

In truth it’s probably been my way of grieving, but I imagine too, that because she was a great advocate, she also had me convinced in her cause. I’m as passionate about creating awareness and trying to help more people get access to palliative care as she was.

But as an artist and filmmaker, I wanted to contribute to the conversation in a way in which I knew how. With this exhibition I hope to open new doors and new ways of understanding end-of-life issues.

For the exhibition, I gathered artists whose work I have had great admiration for over the years, and who have each approached end-of-life from unique perspectives. Their work beckons us to look at what has been considered a difficult subject and suggests that it cannot be processed by logic alone.

Featured new work from the world-renowned photographer, Ed Burtynsky examines the human consequences in the massive death of olive trees in Puglia, Italy;

Spring Hurlbut whose work is some of the most profound and beautiful approaches to end-of-life will be screening her video installation Airborne, that shows the artist opening six boxes containing the ashes of six people, including those of her father;

April Hickox will be showing several works including still photographs and video installation from her series Observance wherein she arranges and rearranges floral arrangements for friends who have died, many of AIDS. The stark contrast of the works is breathtaking, while simultaneously introducing small doses of humour;

Nyle Migiizi Johnston will be unfolding one of his mural works live at the congress in a participatory work. He will also engage in storytelling while he works, bringing Anishinaabe death rituals to the fore;

and Alyssa Bistonath will be screening five new video works throughout the congress as well as her new photo-series Isolation Portraits recently shown at the Art Gallery of Ontario in Toronto.

In addition to these works we will be screening two films. The award-winning short film Perfecting the Art of Longing by Kitra Cahana a powerful and meditative film about her father, a quadriplegic rabbi in a long-term-care facility; and Spring and Arnaud, a love story about acclaimed Canadian Artist Duo Spring Hurlbut and her late partner Arnaud Maggs. Cinematically stunning, the film is an unforgettable look at art, love, and mortality.

McGill University’s International Palliative Care Congress is the longest running congress for this field. Founded in 1976 by Dr. Balfour Mount and his colleagues, it is now organized and hosted biennially by Palliative Care McGill. Over 1,500 delegates, from more than 65 countries participate in making this one of the most interdisciplinary palliative care congresses. Every other year physicians, researchers, nurses, psychologists, social workers, pharmacists, music therapists, art therapists, physical therapists, spiritual care workers, volunteers and many others gather from around the globe to learn from and with each other for the betterment of palliative care. Please join us in celebrating and enriching palliative care around the world.
Congress-specific hashtag: #mipcc22
Twitter : CareMcGill
Instagram PalliativeCareMcGill
Facebook: palliativecaremcgill