Armed force stretching its arm to help the needy: a unique story from Kerala Police 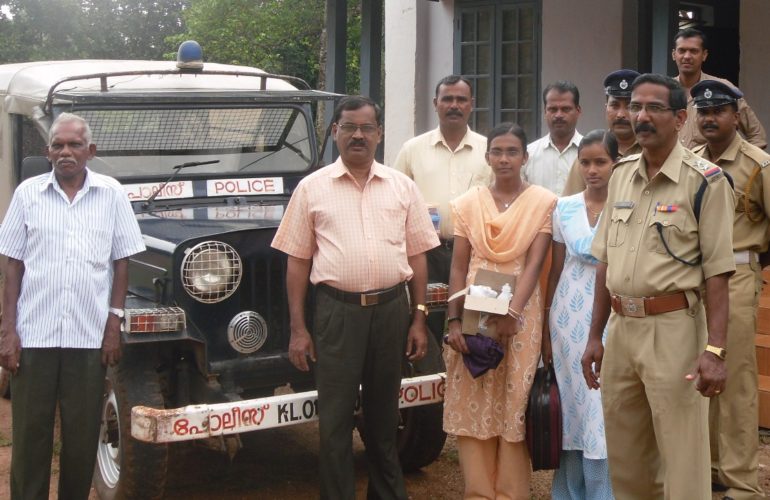 ‘Mythri Pain and Palliative Care Society’ is one among the 200 plus community palliative care services in the tiny state of Kerala, India. But the geographical location of Mythri may baffle you: it is at Mangattuparamba, Kannur University PO, Kannur where the IVth Battalion of Kerala Armed Police is stationed.

What’s common between Kerala Police’s Armed Force Battalion and Palliative Care Service?  It is a unique story of the armed force stretching arms to help the needy.

Till 2008, this camp was just another police training camp in Kerala focusing on stringent training programmes for the police force in enforcing law and order. The recruits had almost no contacts with the civil society outside the campus.

The change towards the better began in June 2008, when an active volunteer of the palliative care movement in Kerala, Mr. T. M. Aboobacker took charge as the commandant of the Battalion. ‘Sabha’ is the monthly meeting of the residents of the camp to meet each other and to address their problems. During one of these meetings, the commandant shared his experiences in palliative care and suggested they too can think of taking a new step. The response was spontaneous and high spirited. The ‘Sabha’ unanimously decided to start palliative care service for the needy patients of the neighbourhood.

Within a few weeks, they organized awareness classes and basic training for volunteers in the camp with the help of trainers from the Institute of Palliative Medicine, Calicut. 30 policemen successfully completed volunteers’ training in the initial phase and an organization was registered with the active involvement of the civil society of the neighbouring villages.

Initially the service was provided to the nearby Municipality and a ‘Panchayath’ close to the camp. The members conducted surveys to identify patients, and a home care service was provided once in a week. The patients included those who suffer from cancer, other chronic diseases, or who are bedridden ridden due to various causes.

The authorities too did their part. They supported the initiative and even gave sanction to use police vehicles for providing home care, and the doctor of the camp hospital volunteered his service. They also got the service of a nurse employed by the Arogyakeralam Palliative Care Project of the Government of Kerala. Now the service has expanded to four more neighbouring areas.  Within four years, they have taken care of more than 300 patients. In this year alone, 75 patients have registered with the service. Two hundred police men have completed volunteer training in palliative care through the training programmes organized in the camp.

“It created a change in the attitude of police men towards life” – said Mr. Unnikrishnan, assistant sub inspector and joint secretary of the Mythri Pain and Palliative Care Society. He has been a volunteer since the beginning of the service. “This is a training camp and trainees, after finishing their training, will be appointed in various police stations in Kerala. Now, along with police training, they are getting the message of palliative care from here which motivates them to do something for the society beyond their routine work. Now the message of palliative care is well recognized in the police force in Kerala”.

“Now we have many friends in the civil society. They consider us as their family members”- added Unnikrihsnan, recalling his experiences.

“In the first year of starting our service, an 80 year old bedridden lady registered with us for palliative care. When we reached her home, we found her in a pathetic condition with sores all over her body. The stench in the room was suffocating. We cleaned and dressed her wounds and started medications. After that, on each Wednesday, she would wait for us as she would have done for her own children. We used to reach her home in the afternoons after visiting other patients. One day, she became very sick. Since that morning, though all her children were with her, she was asking for her “children” from the home care team. “Why are they so late today?” she kept on asking.  When we arrived, she seemed happy and contented. One of my colleagues gave her some water to drink and within no time she died.”  Unnikrishnan went on to conclude: “You won’t normally see such bonding and emotions in a police camp!”

It is not that the men in uniform contribute only their time and effort. The funds needed to run the service is raised from the camp itself by the members, each one contributing INR 10 every month.

The office of the Mythri Palliative Care Service is now in a building donated by a civilian, Mr. Kunju Ambu. He donated a piece of land and a building to the society as recognition of their work. “It is an honor by the local community,” said Mr. K. P. Raveendran, a resident of the nearby Kalyaseri Panchyath and general secretary of the organization. To ensure the participation of the local community in the organization, the general secretary and 12 other members of the Mythri Palliative Care Society are civilians, while the Chairman and 13 members are from the police force.

This service is the best example for a healthy relationship between police and the civil society, according to B. Sandhya , inspector general of police and nodal officer, community policing. She has conducted a study on community policing in Kerala and in the report she finds the involvement of police in palliative care service as one of the effective methods to give a new face to the police to reach out to the masses.

“In Mangattuparambu we can see the emotional bond between patients’ family and the volunteers in the police force. If any of the patients dies, the first telephone call from the family will be to the police camp. We have plans to introduce palliative care service in other police stations in Kerala, as it makes positive changes in the attitude and outlook of police towards life.  This initiative has already proved an effective way to improve relations with the community,” she added.

Mythri at Mangattuparamba makes the tagline of Kerala Police more than meaningful. These officers truly live: ‘To serve and to protect’.