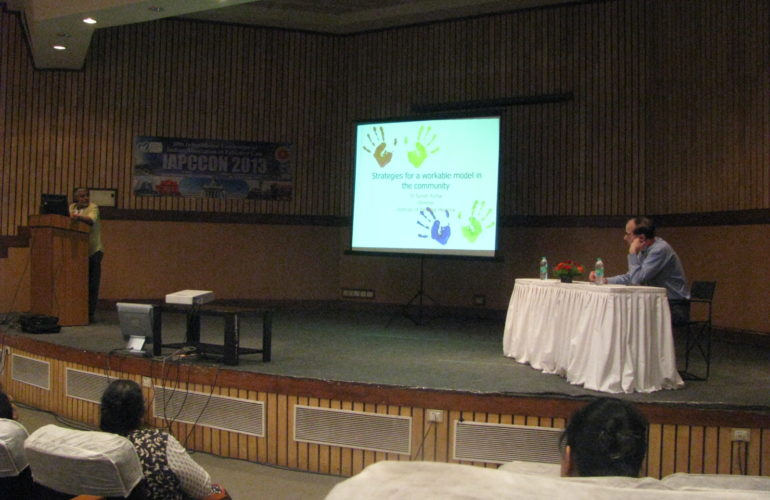 Community participation is the most appropriate model to assure long term care for chronically ill patients at a cost that the community and a country like India can afford- said Dr Balasubrahmanyam M A, CEO, Vivekananda Youth Movement, Mysore. He was talking in a session on Community Participation at the 20th International Conference of Indian Association of Palliative Care in Bangalore. The session, held on the first day of the conference (8 February 2013), discussed various aspects of community participation including possibilities, challenges, the role of civil society and political society and the appropriate model of care.

“We have no other choice. The community model is the only practical solution for India”- he asserted. “I have been working in the community for more than 28 years. What we tried was to provide medical care to people in rural areas in Karnataka. The palliative care initiative has been started recently. But we could realize the role of health providers only after starting the palliative care initiative with community participation. Being with the patient is the most important thing that a health care provider can offer. In the palliative care service we could achieve this. Now we realize that the role we had been playing was that of a ‘drug’ provider. We never thought about the health care needs of the society. Now we are with the patient,” explained Dr Balasubrahmanyam.

“In this model the care providers are the whole community which includes not only doctor and nurse but all those around the patient. Family members, neighbours and friends have their own role in providing care,” he said in a discussion after his speech.

Dr Jairam K. Ramakrishnan, Public Health Consultant of Institute of Palliative Medicine, Calicut, in his speech discussed the positive and negative aspects of involvement of political society in the civil society movement, citing the recent developments in the palliative care field in Kerala. The Communist Party of India Marxist (CPIM) has officially entered into palliative care in Kerala and Dr Jairam personally welcomes this: “Political parties try to hold power,” he said, “Social organizations try to influence them to make positive changes. The Kerala government has declared a palliative care policy in 2008. Without political involvement and government level decisions this could not have been happened.”

Dr Suresh Kumar, director of the Institute of Palliative Medicine, Calicut, Kerala, noted that: “Community participation is a buzzword now. Theoretically it  is very easy to develop a community model. But practically it is not. A single model or strategy is not applicable to different settings. Basic things are applicable to everywhere, but strategies should be modified according to the nature of the community.”

Dr Kumar recognized two final factors to determine the nature of the movement:  Personal values of the members of the community and community’s long term vision for the future.

For the sustainability of community model, the involvement of next generation is crucial and we can find examples in Kerala. This was the opinion of Mr Muhammed Saif, coordinator of students in palliative care programme, based at Calicut. He told conference delegates that the group: Students in Palliative Care is involving in different aspects of the community model like planning and implementation. They offer direct patient care, social and emotional support to patients, organize programmes and implement  projects such as a 24/7 home care programme in Calicut.

For more coverage of the 20th IAPC conference in Bangalore, visit the India edition of ehospice.