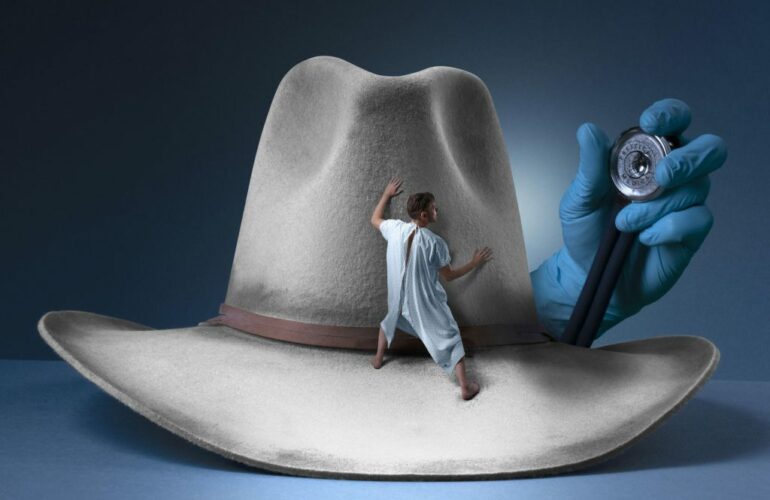 Polarities are abundant in nature: Day & Night, Highs & Lows, Light & Shadow, and so on. They co-exist and beautifully complement each other in what is seen as a grand display of a virtuous balance. One such polarity is that of a Male and a Female, which influences how their roles are divided in our societies. These roles may have been important in the past but are now simply archaic.

Social structures have been erected over centuries to fiercely protect gender roles in our daily lives through subtle words and actions. The psychological harm that this has caused over the ages is alarming though it is largely invisible to us, especially in the context of men. The way the society perceives men not only affects the way they face setbacks but also showcases their coping strategies and how they reach out for help with regard to their overall well-being. In my experience of working with people with chronic care, male patients and care givers often present with certain notions of conditioned gender roles. For example, one of my 45 year old male patient, diagnosed with stomach cancer, displayed non-compliance to the treatment as he believed that he could manage his symptoms and that he did not require any support. During the course of his treatment, his symptoms worsened and he continued to reject even the prospects of support. This led to the development of various psycho-social concerns for which an intensive psychotherapy treatment had to be initiated. During the therapy sessions, he eventually expressed that was the strong patriarchal figure and decision maker of the family and that he would not like to jeopardize his reputation by looking weak and vulnerable.

This is a common occurrence among men which prevents them from seeking the appropriate physical and mental health care. There is a need now, more than ever, to start perceiving men with a humanist perspective as opposed to the confines of gender norms. Men are equally susceptible to physical, emotional, social, psychological, and spiritual concerns. To have a preconceived and patriarchal notion that they are less likely to get affected by these concerns lacks evidence. Socially, this notion translates into an unconscious bias that men are inherently strong, which unfortunately diminishes the importance of the challenges they face.

Men, in turn begin to invalidate their own signs and symptoms of any physical or mental distress due to these stereotypes. A denial of these symptoms leads to a delay in or a refusal to seek help from professionals. They resist the care provided by significant caregivers by taking control of the treatment in their own disempowered hands which ultimately leads to poor compliance.

Looking back a few decades, before the 3rd Industrial Revolution that marked the inception of the I. T. era, the jobs and tasks that we had to do were very much manual and required raw physical strength. This allowed men who biologically hold more physical strength (in comparison to women) to be relevant and kept cementing the stereotype that we today find redundant. The existing notion that the physically stronger gender is indestructible is manifested in their roles (positive and negative) within the society which expects them to be tough. Being hurt, sensitive or soft was tabooed and socially looked down upon.

One of the places where you can predominantly see this stark divide is in our gyms / fitness centres.  These centers are largely filled with men who misunderstand inner healing and overall health with just physical upkeep. To fathom how many of these men are actually being healed of their real health issues is yet to take the form of a household dialogue. For many men, the gym / fitness center is a way to release their daily life frustrations which they have trouble communicating otherwise. A healthy setting such as a fitness centre therefore ends up being utilised in a toxic manner. The parallels of training in these gyms is a further confirmation of their bias towards facing big obstacles and yet, not get easily shaken, as they push their bodies to extremes until the body breaks down.

The gender of a person also plays an essential role in health seeking behaviours since they are closely tied to the stereotypes or the traditional ideals of femininity and masculinity. Men’s reluctance to access health care services is believed to be a major contributor to them having poorer health outcomes. It is therefore essential to promote help-seeking in men to improve their emotional well-being and interpersonal functioning. Various researches have also established the fact that men are less likely to seek help for physical and psychological problems and therefore have poorer health care services. They are less likely than women to seek help from health professional for problems as diverse as depression, substance abuse, physical disabilities and stressful life events.

It has also been observed that men and women are profoundly different in a variety of ways; one such key area of difference is in the area of grief. Men often tend to limit expressing their emotions as they may not want to appear weak. This behaviour is reinforced as they are often expected to be strong which again limits them in asking for or accepting little social support. Societal norms have traditionally taught young males not to cry while teaching young females to be more expressive of their emotions. Hopefully, we will be successful in breaking this stereotype. These conflicting gender messages have the potential to carry through one’s entire life and take centerstage in the form of misunderstandings between men and women who are grieving, which will ultimately culminate in frustration, anger, and a feeling of isolation during one’s grief for both genders.

Men are generally ‘inward’ thinkers as they think of the ‘situation’ and not the ‘emotional responses’. This behaviour does not make them less emotional, or less responsive to those around them, but is only due to the different lens that they wear while looking at the emotional response.

There is a critical need for them to know and receive validation that the emotions they experience is normal and that their responses to these emotions are also perfectly normal.

Those men who are unable to express their grief, are potentially setting themselves up for a lifetime of illness, bitterness, anger, and a lack of connection to life. It is therefore important to promote help-seeking behaviour and break these stereotypes for our men.