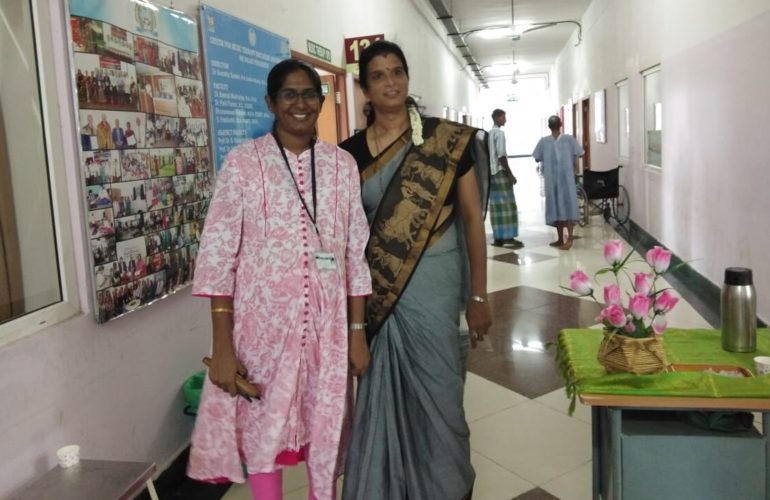 September 28, 2021 | No Comments
Categories: Care, Category, Featured, and Must Read.

Experiences in working with the LGBTI community: A Nurse’s perspective

It was in 2016, that I met my best friend, Dr. Mx K. Sheethal (Mx – Transgender) who played an instrumental role in setting up a gender clinic for the LGBTI community in our medical college, the Mahatma Gandhi Medical College and Research Institute, Puducherry. I reached out to her, to solicit her guidance to help materialise my dream: Making our palliative care ward ‘transgender friendly’ and ‘inclusive’. Dr. Sheethal simply smiled after listening to me passionately describe my ambitious project to her. I was taken aback and felt that she belittled my project. I let it go assuming that it was her ignorance coupled with her lack of awareness of palliative care that made her indifferent to my dream project.

Dr. Sheetal, then showed me a picture of a beautiful transwoman, Mx Charishma. She went on to share that Mx Charishma, was all of 22 when she ran away from her home five years back to escape being abused by her father; a soldier who was unable to accept his son’s feminine characteristics. Charishma had been sexually abused innumerable times over the past 15 years!

Charishma then travelled to Mumbai and was forced to resort to prostitution and begging, to save money for her sex reassignment surgery. She suspected haemoptysis and was quite certain that this was the consequence of secondary smoking due to her constant exposure to fumes; exposure since birth to her chain-smoking father, and to her current exposure from the clients at the brothel. Charishma’s intent to fly to Chennai to undergo treatment and thereafter live the life she desired after undergoing her Sex Reassignment Surgery was thwarted as she couldn’t fly, due to the absence of a valid ID card.

“We don’t have anything to prove that we exist; no passport, no voter ID card. We are not even counted”, said Dr. Sheethal. It was then that I began to slowly recognize and understand the distressing life of these visibly invisible people.

Dr. Sheethal then continued to share, Charishma acquired the courage to travel as she was driven by her zest to live. There was no ‘space’ for her in the bus to travel as nobody offered her ‘space’. This lack of ‘space’ was an issue everywhere, for everything (including to eat and sleep) and at all times, day and night. Despite these obstacles, Charishma managed to successfully reach a hospital in Bengaluru. As she was entering the hospital, the gatekeeper threatened her by saying, “We have CCTV and securities everywhere”. Even though the gatekeeper’s comment was meant to be a warning, the always well-intentioned Charishma took this to be an assurance of security and comfort.

Charishma proceeded to the registration counter and was made to wait as there were separate counters for men and women. She kept to herself as she wanted to respect and not make the other patients at the hospital feel uncomfortable. Once the counters became empty, Charishma approached the receptionist to register herself.

She told the receptionist, “My name is Charishma, Age: 22 years, Sex: Transgender”

Receptionist: “Can you prove it? Do you have any documents?”

Charishma: “You can register me under any name… I don’t have anything to prove anything..”

Receptionist: “Why are you here? This is a hospital.”

Charishma: “I have a bad cough and I want to consult a doctor,”

Receptionist: “ I don’t know… but you must go.”

Charishma: “Any doctor… please… I am telling you the truth.”

Receptionist: “No… noo… leave this place. What will others think? I will call security”

Within no time, the security arrived and Charishma left the hospital; out of fear.

After a brief pause, a visibly distraught Dr. Sheetal went on to add “Charishma’s bladder was so full. Yet, she wasn’t able to use the washroom in the hospital because it was also not meant for her. Over the next few days, Charishma continued to visit several hospitals, with each visit providing her with a similar or a worse experience. She got weaker with each passing day. Some strange luck facilitated her admission to a hospital in Chennai, where she was diagnosed with HIV and TB. This diagnosis shattered her, as she didn’t have the resources or the support to help her during the course of her treatment. Charishma fought hard to overcome her growing mountain of suffering. One day she chose to end her suffering. She took all her pills in one final gulp”

Dr. Sheetal then looked at me and said, “Now you tell me, do you genuinely think that by allocating a few beds in your ward for transgender patients, health care will become accessible for people like us?”

Since my conversation with Dr. Sheetal, I began to hear similar incidents every other week with only a change in names: Sanjana, Susmitha, Monica, Ameya and so on. The reasons for their suicides were many and complex. I strongly felt that some of those lives wouldn’t have been lost if only they were not denied one of their fundamental rights; access to basic healthcare. I then remembered the words of Rev. Dr. Martin Luther King Jr. “Of all the forms of inequality, injustice in health care is the most shocking and inhumane.”

My friendship with Dr. Sheetal has grown over the years. She has helped me to not only make our palliative care services ‘inclusive’ but to also help combat my occasional despair in both personal and professional life. I am also grateful to the community members of her NGO, for guiding me on how to make palliative care accessible to them.

I wish to share with you all, a few questions that some transwomen have asked me and which keep echoing in my ears:

“How would you feel when your mom asks you to leave her?”

“What do you feel when people see you only as a sexual object or a thief?”

“How would you feel if your guardians, (eg. police, teachers, your older relatives) abused you at a very young age?”

Despite being a palliative care nurse, I truly don’t know what I would do if I was asked to be in their shoes.

While our society has started accepting death to be an integral part of life by listening to and palliating those who are suffering, it is now time to wake-up from our deeply embedded homophobic and transphobic attitudes, which might cost many lives.

My parting message is therefore borrowed from Dame Cicely Saunders “You matter because you are you, and you matter to the end of your life. We will do all we can not only to help you die peacefully, but also to live until you die.”

Dr. Sheethal K., is a Transgender Right Activist and the President-cum-Project Director at the SCOHD Society.

About the Author: Ms. Anu Savio Thelly is a Nurse Consultant at the Department of Palliative Medicine, Mahatma Gandhi Medical College and Research Institute, Puducherry.