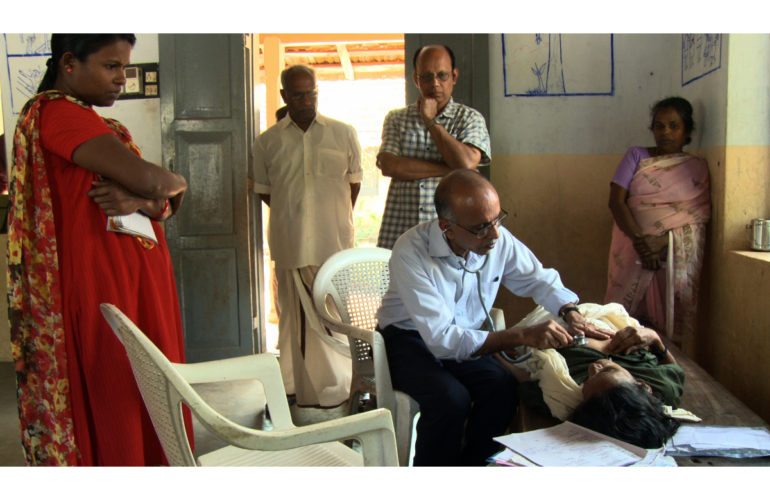 The man on the examination couch had banged his head against the wall. Blood was oozing out of the ugly cancer on his cheek. He thrashed about and made weird noises, like an animal being tortured.

My colleagues were already with him. I was about to move to him when I felt a tug on my sleeve. His wife, a painfully thin elderly woman, wanted my attention.

She tried to get up, but was so visibly exhausted. I sat beside her. “Please…” The desperation in her voice was compelling. I lay a hand on her hand and asked: “What is it, Chechi?*”

“Please put something into him,” she said. “Finish him off. Please…”

Naturally taken aback, I stammered some response. Sensing that I was not going to oblige, she stopped me, grabbed my hand and said: “I promise. I promise by everything solemn to me that I will not breathe a word of this to anyone.

“No one will know. Only you and I will. Just finish him off. I cannot bear to see this suffering anymore.”

Before my next stammering response came, she added: “It’s all my fault.”

I was surprised. How can his cancer be her fault?

“He had tried to save himself by jumping out of the window,” she said. “It was a tall, tall hospital. He could have escaped from this life. But I screamed and yelled and dragged him back.

“People came and restrained him. I should have allowed him to go. Then he would not have had to bear this endless agony.”

She went on to describe the suffering: how for days and nights through months he continued to be in sleepless anguish, how he seemed to be losing his mind.

As we talked, my colleagues had managed to insert a needle into him, and were giving him 1.5mg aliquots of injectable morphine every ten minutes.

An hour and half later, with 12mg of injectable morphine into his body, he sat up.

He was put on oral morphine and other medications. I saw them again two days later. They wanted to know, was there any chance of cure at all?

Although there was not, it was striking to see how the agenda had changed from euthanasia to possible cure.

It took a few days, but the couple eventually accepted the incurability and the fact that death could come any time.

He decided to spend the remaining time settling the family property and had a delightful trip to the primary school where he had studied.

He wanted to climb the hill which he and his friends had conquered in their youth; but decided after all that this might be too much for him.

As he was travelling back from the school, he said he was at peace. But he was not at peace enough to keep him from confronting me with a grievance.

If such pain relief was possible, why was it denied to him all these months?

He was not willing to listen to the reasons or the “barriers” as we called them. He was not interested.

To him I represented the medical system. On behalf of that medical system, I had to accept the responsibility for the burden of pain that people like him had to go through.

I promised to him do my best. I was forgiven.

This article originally appeared on the International doctors for healthier drug policies (IDHDP) website. It is republished with permission.

You can show your support for the IDHDP campaign online.

*Chechi in Malayalam language literally means an elder sister, but in ordinary use is an affectionate term for any woman older than you.