The evolving social narrative of ‘Poverty’: A random recollection 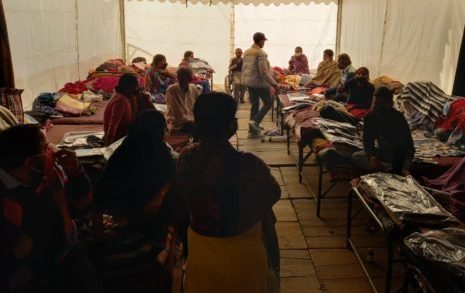 Poverty is not having enough resources to meet one’s basic needs.

The onset of chronic or terminal diseases aggravates an individual’s existing situation and pushes them into a state of deprivation; a possible aggregate deprivation of physical, psychological, financial and social wellbeing. The ripple of this new diagnosis is also felt by the patient’s dependent family members as well.

The Palliative Care mission under DNip Care strives to reach out to these chronic patients, assess the issues being faced by them and thereafter devise an appropriate intervention to negate these issues.

I would like to showcase how the social narrative of ‘poverty’ is now slowly changing while provisioning palliative care by sharing three of my personal recollections.

It was one Saturday morning, when we reached the rented dwelling of Mr. Sunit (name changed), a tongue cancer patient who lived in the outskirts of New Delhi. Disease and related sufferings apart, his biggest worry on that particular day was the fact that his two school-going children were unable to attend school and were sitting at home. On further probing we learnt that the family’s financial poverty had restricted them from purchasing uniforms as the limited income was redirected to more pressing needs. Sunit’s inability to provide for his family had caused immense distress to Sunit. Our immediate priority was to therefore, make arrangements to ensure that Sunit’s children had access to uniforms so that they could resume attending school and continue their education. Addressing this concern of Sunit, or of those of others such as Sunit, by whichever way relieves them of their worries and sufferings will help improve the quality of life of these chronic patients.

This to my mind, qualifies to be one of the methods of provisioning palliative care!

I still vividly remember visiting Kumar’s (name changed) home along with our palliative care volunteers on the day his treating team had recommended him to undergo a colostomy surgery to get rid of the imminent issues of the disease. You see, Kumar was suffering from Colon cancer. Kumar was extremely dejected on the day of our visit after hearing the news of his upcoming surgery. Our visiting team which included our volunteers made him realise that he was not alone, reassured him of our support and instilled within him the confidence to move forward in life. A more confident and a reassured Kumar then underwent the procedure and learned to live a contended life, back in his native place. He was able to resume all his activities (which also included horse riding!!) all of which was done with his colostomy bag still attached to his body.

While we were successful in addressing his temporary psychological and social poverty, we did fail in addressing his personal emotional poverty. We were unable to reunite Kumar with his wife, who despite being a professional nurse, had deserted him as she was unable to reconcile with the fact that Kumar would have to live the rest of his life with a colostomy bag attached to him.

A possible financial poverty had forced Rohit (name changed) to run away from his home (a remote village) to New Delhi when he was only a 15 year old teenager. Since then, he lived in New Delhi and did odd jobs here and there, but never once thought about going back home or attempted to enquire about his parents and siblings. The lack of financial and social security coupled with peer pressure coloured some of Rohit’s life decisions which was probably not his best interest. During the last couple of years Rohit was diagnosed with oral cancer as a result of his habit of constantly chewing tobacco. A few good Samaritans took note of his distress and got him admitted to the Cancer Institute as a destitute patient. It was then that we met Rohit, as he was undergoing treatment at the emergency ward in the hospital. Our volunteers began to search for his family with the intention of reuniting him with them. However, Rohit’s inability to speak clearly, due to the oral cancer, coupled with his illiteracy added an additional layer of challenges for us to navigate through in our feat to identify his family. Rohit was then discharged and referred to the palliative care unit for end-of-life care when his disease progressed and he became terminal. Having lived a hard life, Rohit finally had some respite when he availed admission at the cancer hospice centre, and was able to receive the best possible care. After a lot of efforts, our volunteers achieved a breakthrough when they were able to finally locate Rohit’s family. A video call was immediately arranged between Rohit and his family. The family was able to finally reunite after over two decades! An elated Rohit was however unable to interact much with this parents and siblings due to the cancer imposed restrictions in his vocal chords and due to the large bandages which covered his face. A relieved Rohit then departed from this world in haste, without actually meeting his family in person. It was only Rohit’s remains which eventually returned to his home. His family then conducted his last rites.

With these three recollections, I hope that I was able to sufficiently highlight the importance of focussing on and addressing ‘poverty in totality’ as we continue to care for our palliative patients. The time for us now to generate awareness about this changing narrative of ‘poverty’ and to create  adequately informed civil societes and Government agencies, which will make available appropriate medical treatments and integrate palliative care in the care pathways, so that those in need of such services will be able to access the same in a timely manner.

About the Author: Mr. K. V. Hamza is the General Secretary at DNip Care, New Delhi.