Where Would You Go If You Were Dying? 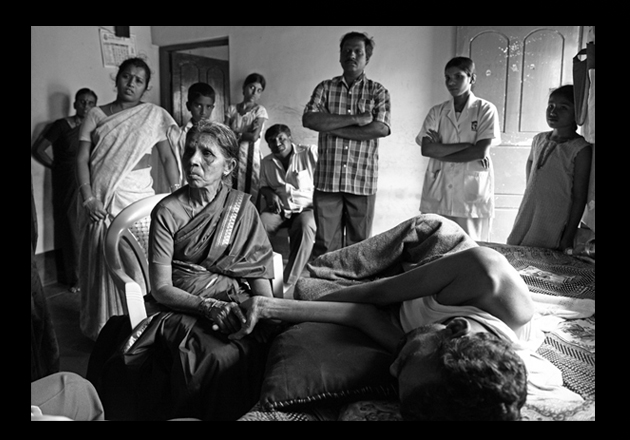 Photojournalist Hari Adivarekar spent two years among the dying and the living at pioneer Bangalore hospice, Karunashraya – one of the first of its kind in India to offer free palliative care to those beyond medical cure.

He followed staff of Karunashraya such as Dr Nagesh Simha, Medical Director of the hospice and President of the Indian Association for Palliative Care, and Somashekara Chari, designated auto driver for Karunashraya, as they care for dying people in their community. Somashekara might notionally be just the designated auto driver, but he has been visiting the dying for almost two decades as an emissary from the hospice. He has also become an official Karunashraya homecare manager in the last few years.

“The concept of palliative care is not understood by many people and one of the biggest impediments is the medical profession itself,” says Dr Simha. “The [idea prevails] that if the person’s disease overtakes him, it is the doctor’s failure. [The medical fraternity isn’t] doing this purposely, but because of ignorance. Things are changing, but India is such a vast, complex country. I’m confident that in the next 5-10 years, we’ll see [many more] palliative care centers, not only for cancer but also for end-stage kidney and cardiac diseases.”

Read Hari’s story, and view the images he captured, in this gallery.

Hari Adivarekar is a photojournalist based in Bangalore, India. His areas of work include social issues and justice, music and culture, communities, oddities and personal histories. You can see more of his work at http://adivarekar.in or connect with him on Facebook.