Witnessing bottled-up sufferings…story of Nathu and many others… 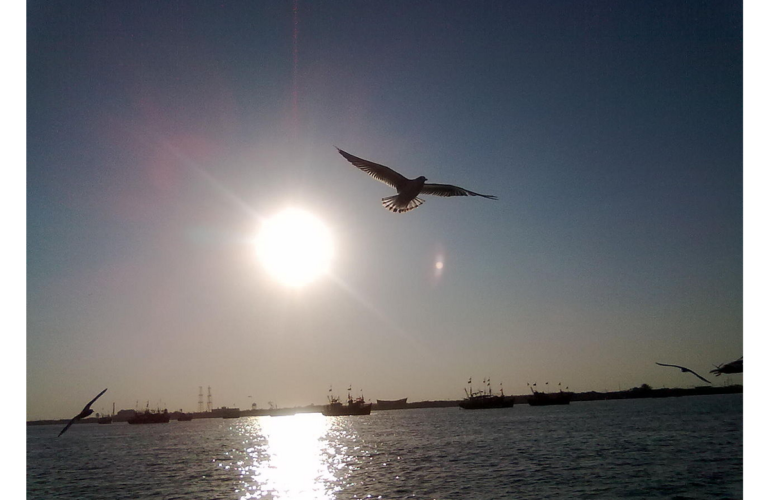 Three tiny homes open out to a narrow courtyard. An elderly man reclines on a cot under the shade of the small solitary tree, a toddler nestling to his chest. An amiable cow stands close by, contemplating the charming scene. I walk behind Dr Jitesh Sarvaiah, the palliative care physician at the M.P Shah Government Medical College Hospital, Jamnagar, Gujarat, expertly dodging the friendly moist tail that the cow offers to caress me with.

Small that I am, I still have to stoop to get into the one room hut. When my eyes accommodate to the relative darkness, two eyes with a hunted expression greet me above a mass of rags.

Nathu (not his real name), 28, has advanced cancer of the tongue. The word “advanced” seems so very inadequate to describe what Nathu has. I get to see it in a few minutes – when Jitesh has cleared enough space for us to perch on the rickety bench. The eyes sparkle in response to Jitesh’s smile and greeting. Nathu cannot talk. He seems to be asking Jitesh to take a look. Putting on a pair of gloves, Jitesh gently pulls the rags on Nathu’s neck to a side. As he does, Nathu coughs, and from the now-exposed tracheostomy, a projectile of sputum hits me on my cheek. Nathu’s elderly mother gasps. A tear wells up in Nathu’s eye. What would the composition of that tear be? A blend of guilt and total, sheer helplessness? Does he hate himself at that point of time? I want to reach out to him, but Jitesh is already working on that neck.

The tracheostomy seems to arise from nowhere. Beneath the angles of his mouth, Nathu seems to have nothing – till his chest seems to start at the end of that gaping hole. Nothing at all, till Jitesh switches on his torch. Now, deep in there, I can see a yellow mass of tissues surrounding his spine. Most of his lower jaw and neck have been eaten away by cancer – leaving a cruel, sharp, knife-like piece of bone under the right ear.

Just a week back, Jitesh says, maggots had crawled over that neck. Jitesh, working alone, had gently held a piece of gauze soaked in turpentine oil over the wound and had then removed the maggots one by one. It had taken a long time, but now the wound is maggot-free.
The mother thinks Nathu has diarrhea. Nathu protests. He had had constipation for a while. Does Nathu now have overflow incontinence?  Jitesh wants to do a rectal examination. Nathu agrees. Nathu’s brother helps to turn him to a side, while Jitesh puts on another pair of gloves. The rest of the family moves out of the room. I try to shut the door to give Nathu more privacy. The door comes loose in my hands. The hinges had been gone these many months. Nathu’s brother picks up the door and balances it precariously against its rotting frame.

Nathu is indeed constipated. Jitesh removes the hard fecal matter with his fingers, puts it in a plastic bag for disposal and cleans Nathu up. Prescriptions are written, the wound dressed, and we are almost ready to go.

Nathu has a question for me, mostly using sign language. Could I help to end his life? He had been making this request to Jitesh for weeks now, and Jitesh was not obliging. Could I?

I sit down again and hold his hands. That is not enough. Nathu is looking at me with pleading eyes. He wants an answer. I wish he could talk so that I could help him to unburden part of the suffering bottled up in him. But he cannot talk; nor can he write. Feeling very inadequate, I offer to pray that he lives with as little suffering as possible. A tear rolls down what is left of his cheek. As I reach forward to wipe that tear, he grabs my hand and holds it close to his eyes and weeps. A minute of silence and then Nathu’s sobs subside. As we leave, his eyes smile at us, finally.

We now move to a second home, in the autoriksha that Jitesh has hired for the evening. The road is cruel, the autoriksha practically jumping over boulders. The driver never takes a break from chewing paan, a killing combination of tobacco, betel leaf, betel nut and lime and periodically spits luxuriously on to the road. We reach another hut. The 45 year old man wearing dirty clothes has advanced cancer of cheek. He is on morphine and has excellent symptom control. He has a huge plastic ash tray near him; it is quite full. But there is tension in the home. He refuses to stop smoking or drinking. Everyone wants him to stop. Why should he stop at this advanced stage of the disease, we debate. It is the only possible pleasure that he can have in these last few weeks or months of his life. But where will the money come from? His wife is the only earning member of the family. If the pittance that she earns is spent on cigarettes and illicit liquor, how will the family eat? We dispense medicines and leave, with the question unanswered.

The next family is visibly rich. The important looking men in the living room completely ignore us as we advance to the bed room. The elderly man with incurable cancer has a huge liver and has hiccups. Many members of the family hover around as Jitesh adjusts his medicines. Is there no chance at all of a cure, the son asks. The patient looks on, seemingly unconcerned at the reply.

We had started the tour at 4 PM, after Jitesh had finished his routine work in the hospital. The sun is setting now. Our fourth and final visit is to a very narrow, tiny room that houses an elderly abandoned woman. Her husband died long back, and the married daughter lives elsewhere. The woman has advanced cancer of the cheek and cannot talk. Jitesh had found her a few weeks back, with no food and no support. Jitesh would give her 200 Rupees during every visit out of his own pocket, so that she can get someone to give her food. Jitesh had tried to talk to the neighbours who were all relatives. None of them wanted to help; the woman was quarrelsome and would only abuse them, they said. But today, a teenaged girl wanders in to watch, a distant relative. Her pretty face is marred by the stained gum and teeth – she is chewing paan like almost everyone else, busy investing in her own personal cancer for the future. Jitesh does his ministering of the old woman and the girl comes forward to help. The woman asks for money. It changes hands, and the woman blesses us. Will she help the woman, Jitesh asks the girl. She nods as if to say, she will try. Could that be the beginning of involvement of the neighbors? We leave, hopeful.

Dr Agarwal, a great humanist who had built the Department of Radiotherapy in Jamnagar from scratch, had worked with Pallium India to add the palliative care service. Dr Jerina Kapoor, founder president of Pallium India-USA got together several Americans of Indian origin to fund the project. Dr Jitesh volunteered to undergo six weeks’ training in Trivandrum and on his return to Jamnagar in February 2012, started the palliative care service.

Jitesh does his regular job as a tutor in Radiotherapy and combines the clinical Oncology work with palliative care. He found the patients who could no longer come to hospital for review and started making home visits to them. Till recently, he had used his own motorbike for the home visits, but it was difficult to carry the supplies and eventually, Dr Agarwal managed to get the Government’s Non-Communicable Diseases program to fund the hiring of an auto-riksha for the purpose. Sheer luxury now!

Through the day, we did a program review, a planning session and interviews. Jitesh must get the help of a nurse and a social worker. The medical superintendent is supportive; he will help. A retired nurse is willing to get trained and join the service. The service needs support from the community. The state of Gujarat has been very progressive of late; the time appears to be ripe for palliative care planning.

Just a couple of days back, the Commissioner and Principal Secretary of Health, Mr P K Taneja had called a meeting to plan incorporation of palliative care into Gujarat’s health care system. Pallium India has offered to work with Dr Geeta Joshi of the Regional Cancer Centre at Ahmedabad and with Dr S.K.Agarwal of Jamnagar to prepare a concept paper leading hopefully on to an action plan. We are moving forward!

And move forward, we must. There is this huge gap in India between the hospital and the home. The health service is visibly improving in most of the country in the last few years. But it still caters largely to curative treatment alone. The Government’s Non-Communicable Diseases program has begun to make a change, but is yet to incorporate palliative care, with the result that those with incurable diseases are left to die in their homes in misery, the dwindling family structure sometimes failing to offer even companionship.

The next day, I leave Jamnagar. Kind Dr Agarwal had offered to drive me on the previous evening to Dwaraka, the holy abode of Lord Krishna. Coming so close and missing the opportunity for that pilgrimage appeared to be such a shame, but I had chosen to go on home visits with Jitesh instead. I was lucky. The Lord came to me instead, manifesting Himself in the form of Dr Jitesh Sarvaiya and Dr S.K. Agarwal.