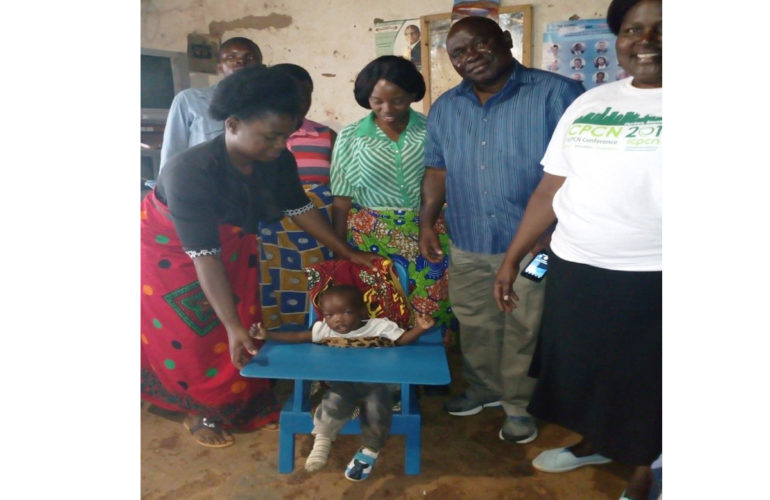 Earlier this year we shared Shadreck’s story on ehospice. Eighteen month old Shadreck Longwe was born in a village in the northern region of Malawi. His mother died immediately after a home delivery from a twin pregnancy, due to post-partum haemorrhage. The first twin died a few hours after birth. His father wished for Shadreck to die as well, after losing two people at once.  While friends and family were busy attending to burial ceremonies of his mother and twin brother, he hid Shadreck in an unroofed mud house without clothing.

That is where Shadreck’s aunt discovered him after three hours, suffering from severe hypothermia as it was raining at the time. She rescued him by wrapping him with warm clothes and blankets and took him to the nearest mission hospital where he was admitted and placed in an incubator.

The article, shared with ehospice by paediatric palliative care nurse Beatrice Mang’anda, spoke of  the hardships experienced by his aunt and her family who, while living in extreme poverty, were doing their best to care for Shadreck. Along with an Occupational Therapist from Mzuzu Central Hospital, the CPC team from the hospital have been helping to support Shadreck and his family.

They described the greatest needs for this family as nutritious food, such as porridge with good nutritional value, and a cerebral palsy chair to enable him to sit and help to hold up his floppy head. (The chair would also relieve his aunt from putting him on her back most of the time and allow friends to entertain him while he is in his chair.)

Shadreck’s story touched the hearts of the ICPCN staff who reached out to Beatrice to ask how they could, at the very least, provide the much needed CP chair so that he could sit up and interact with family and friends.

We are thrilled to report that with money donated by ICPCN staff members, a brand new custom made CP chair has been delivered to Shadreck and the family has been provided with some nutritious food and supplies to assist with his day to day care.

Following an article that was published on the ehospice website in January about Shadreck, with a condition of cerebral palsy due to brain damage, some well-wishers from International Children Palliative Care Network (ICPCN) have supported him with a cerebral  palsy chair and assorted food items. The article was written under a one year Children palliative Care Project being implemented at Mzuzu Central Hospital by Concerned Youth Organization (CYO), funded by the African Palliative Care Association (APCA).

On 30th March 2019 the Palliative Care team from Mzuzu Central Hospital (MCH) and Concerned Youth Organization (CYO) handed the chair to Shadreck at Masasa Township. It was a very inspiring moment to see Shadreck relieved from the position of sleeping to sitting up, we could see Shadreck smiling on the chair.

Shadreck’s aunt had this to say:

“I have ran out of words for what you people have done to my son Shadreck. It has been a challenge to provide care to him especially with his problem of failing to hold his neck, I always lie him down as I do my house chores or put him on my back. Today it is a big relief to see him having this chair that will enable him to sit up and play with friends. .As for the food ….mmmmm!! I am  so grateful because all these days he has been refusing to eat plain porridge and now, since you have brought me all these food items, I say thank you so much. Please extend my thankful gratitude to the people who have supported Shadreck and the good Lord bless them always.”

To learn more about the work of the children’s palliative care project in Mzuzu or to offer any further assistance, you can contact Beatrice Mang’anda on beatricemanda@yahoo.com