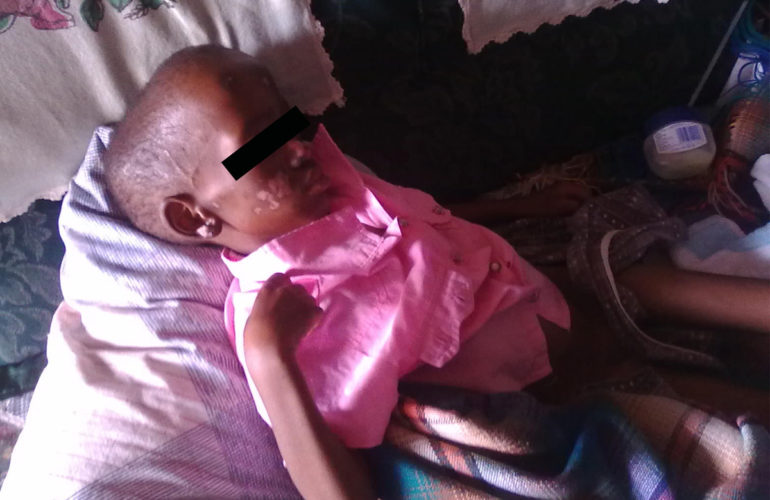 Golden Gateway Hospice nurse, Helen (Topsy) van Zyl, remembers well her first encounter with 7 year old Dineo. She recalls the day in November 2011 that Dineo’s granny brought her to the hospice. “Even at age 6, Dineo was so small, emaciated and weak that her grandmother carried her on her back like a baby. She had been diagnosed as HIV positive the previous month and her grandmother later told me that they had come to accept that it was time for Dineo to ‘go to her ancestors’.”

At the time of Dineo’s initial assessment she was malnourished and anaemic. Van Zyl relates that Dineo’s skin was dry, she was suffering from severe thrush, had diarrhoea and vomiting and all her glands were swollen. Her liver was enlarged and tender and she had abdominal distension. She was also coughing and was very sleepy and uncommunicative. She was unable to walk and had reached very few of her normal developmental milestones.

Van Zyl wasted no time in having Dineo admitted to the local hospital, where she was started on ARVs as well as treatment for all her other symptoms. They were thankful to hear that she did not have TB, an often deadly co-infection of HIV. A week later, she was discharged from the hospital and went back to her home – a shack that she shares with her grandparents and 10 other family members. Both Dineo’s parents are deceased and only three people living in this informal home bring in any income.

“This is not an unusual situation for many of our patients,” says van Zyl. “Hospice nurses and home based carers are often confronted with such extreme poverty. We do what we can to alleviate not only the physical suffering of our patient and their families, but also give social, emotional and spiritual support.”

For Dineo, this support from Sister Topsy van Zyl and the staff at Golden Gateway Hospice has been her lifeline. She is visited weekly by a carer who monitors her health and makes sure that she is taking her medication. If there is a problem the carer reports this immediately to the nursing sister who will go and see Dineo and refer her to a doctor or to the hospital if necessary. Ongoing conversations assist her carers to provide the appropriate care for a HIV positive child. The nursing sister sees Dineo monthly to weigh her and to answer any questions that she or her carers may have. The family is also supplied with nutritional supplements when these are available at the Hospice. “When Dineo was very sick she had no appetite so we gave her nutritional sips which she could drink once a day,” says van Zyl.

In addition, the hospice Social Worker has done a full psychosocial assessment on Dineo and her family. Counselling was provided to the family and she continues to receive emotional support through her attendance at a support group. A referral was made to a networking partner who assisted the family to obtain a grant for Dineo. At present the Social Worker is working with the hospice’s proposal writer to obtain funding to enable the family to purchase a school uniform for Dineo and for the other children in the home.

“Now she is my little miracle girl,” says van Zyl proudly “and she is starting school next year.”
There is no doubt that when Dineo’s first school day arrives, Sister Topsy van Zyl and the staff of Golden Gateway Hospice, will be there, cheering her on.

The latest figures from the World Health Organization (WHO) and UNICEF estimate that 3.4 million children worldwide were living with HIV at the end of 2011, 91% of them in sub-Saharan Africa. The United Nations estimates that around 370 000 children below the age of 15 years are infected every year with the virus. Most of these children acquire HIV from their HIV-infected mothers during pregnancy, birth or breastfeeding. Although mother to child transmission can be significantly reduced, such interventions are not yet widely accessible in countries with limited resources.

“Children on ART still often have to deal with pain and other symptoms,” says Dr Julia Ambler, a paediatric palliative care specialist with The Bigshoes Foundation in Durban. “They also often fall victim to opportunistic infections.” She goes on to say that, “Unfortunately pain in children is under treated because children often lack the verbal skills needed to express their level of pain.” According to Ambler, another complicating factor is that, unlike palliative care practitioners, many health care workers are not trained to accurately assess pain in children. “

Tracey Brand, a paediatric palliative care social worker adds, “Added to this burden, children with HIV often develop slowly and need interventions that address developmental delays, both cognitive and physical. And children who have lost one or both parents to AIDS are also in need of considerable psychological, emotional and social support, which palliative care provides. “

“Unfortunately the United Nations estimates that around 72% of HIV positive children worldwide will still suffer and die from AIDS,” says Joan Marston, Chief Executive of the ICPCN. However, hospice organisations have been at the forefront of providing the kind of holistic support and care that allows the HIV positive child to live as normal a life as possible. Appropriate palliative care not only relieves pain and symptoms related to AIDS, but very often gives children a real hope for the future and the opportunity to reach adulthood.”