Asociatia Lumina: A Hospice for Children’s Palliative Care in Romania 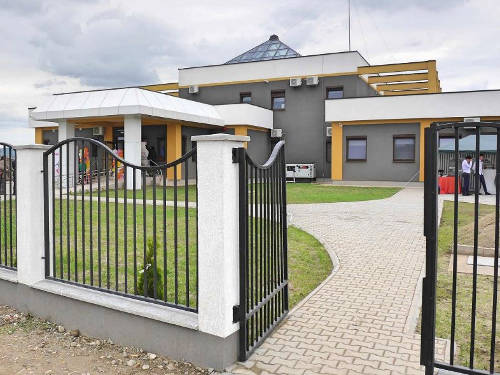 More than 18 years ago, Steve Cooper, an Englishmen, came to Romania, brought by rumours of the difficult situation that children were facing in orphanages at that time. What he saw motivated him to establish Cry in the Dark Foundation in the UK and a year later, Asociatia Lumina in Romania. ’Casa Lumina’ (House of Light) is a residential home for 22 young adults with severe psychomotor disabilities. When the house was founded in 1999 the 22 young adults were young, but Casa Lumina will remain their home, for as long as necessary.

Later in the 2000s, Steve met Albert, who was an orphan facing an incurable disease. Albert knew very little English but with time, he learnt some of the language and Albert and Steve became very good friends. Albert was cared for by his aunt, but as his condition became worse she was no longer able to cope. Steve and the team at Asociatia Lumina helped Albert and his aunt as much as they could. Sadly in the end he died alone in a hospital bed.

In Albert’s memory and because no child should die alone, Steve built ’Casa Albert’ (House of Albert) a centre providing children’s palliative care. Casa Albert is a day centre, operating twice a week, for children and young adults whose health conditions allow them to be transported.

The situation in Romania
In Romania the situation of children who need palliative care is very critical. 985  children or 60% of the children who need palliative care in the north east region of Romania live in rural areas. Recent studies conclude that Romania is one of the European countries with the highest levels of poverty. About 42% of the population are at risk of poverty and social exclusion in the EU-27, a level exceeded only by Bulgaria. Another observation constantly underlined by these studies is that poverty is more visible in rural areas, namely

Our phones were constantly ringing with a parent at the other end asking,”Can I bring my child to you? The doctor told me there is nothing more that can be done for my child.” So, we decided that it is time for us to take the next step – for us to consider the first hospice in Romania, fully dedicated to children’s palliative care. We had the dream but had no idea how we were going to do it. All we knew was that everything happens for a reason, at the right time.

In February 2014, Velux Foundations, from Denmark, announced that they were offering grants to NGOs in the South East of Europe for innovative projects. We were asked to send an initial letter and, if they were interested in our proposal, we would have to send further details of the project. After two weeks we received a response. They liked our idea and asked us for details of the project. This marked the beginning of a real adventure. It took us one year of assessment, writing up the project, building the budget, visits from the representatives of the Foundations, external assessment, signing a partnership with the Local Council for the land to build the hospice, lobbying and advocacy. After one year, in March 2015, Velox Foundations offered us €1.2 million. The total value of our project was €1.8 million but we were finally able to start our journey.

The building
Today our building is rising and we estimate that the building will be ready to receive patients in April-May 2017. We have partnered with a few Romanian companies as well as with the local and county council.

The new hospice for children, in figures:

Although we have done so much work, there is still a long way to go, we still need to lobby and advocate. Romania does not have guidelines or specialists in children’s palliative care, but we are sure that our team will be part of bringing about major change in Romania.

The one thing that we can offer to the children who need palliative care, is a chance to dignity!