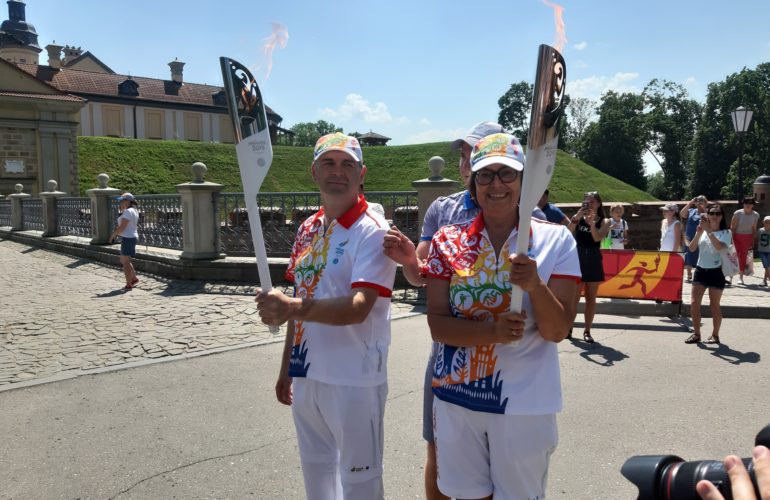 Photo: Anna Garchakova (right) carries the Flame of Peace through the city of Nesvizh on its way to Minsk (Photo from Facebook)

Accompanied by fans, supporters and colleagues, Anna Garchakova, Director of the Belarusian Children’s Hospice proudly carried the Flame of Peace through the streets of Nesvizh on its 7,700 km relay journey today. The relay is to raise awareness of the 2nd European Games that will take place in Minsk from Friday 21 June – Sunday 30 June, 2019. Over 4,000 athletes from 50 countries are expected to compete in the games.

The 2nd European Games Flame of Peace was lit at Ara Pacis Museum in Rome on 3 May. The torch has traveled through Slovenia, Austria, Hungary, Czechia, Slovakia and Poland. Within Belarus the torch has been carried through a number of cities before reaching Nesvizh.

Taking part in the torch relay are 450 of the country’s best citizens, chosen for their contributions to sport, education and culture. The inspiring work of Anna Garchakova, founding Director of the Belarusian Children’s Hospice led to her being chosen as one of the torch bearers.

An inspiring leader in the field of children’s palliative care

Anna Garchakova introduced palliative care to the Republic of Belarus and is also the head of palliative care education at the Belarusian Medical Academy of Postgraduate Education. She was awarded the Cross of the Most Sacred Order of the Orthodox Hospitallers in recognition of her service to the development of care for children with palliative care needs in Belarus.

In 2010 she was named Woman of the Year by the Union of Belarusian Women for her work and in 2018 Ana and her team were awarded the most prestigious Presidential Award for Contribution to Spiritual Welfare.

The Flame of Peace will finish at Dinamo National Olympic Stadium during the opening ceremony of the games on 21 June.