Bringing palliative care to the children of the Pacific Islands 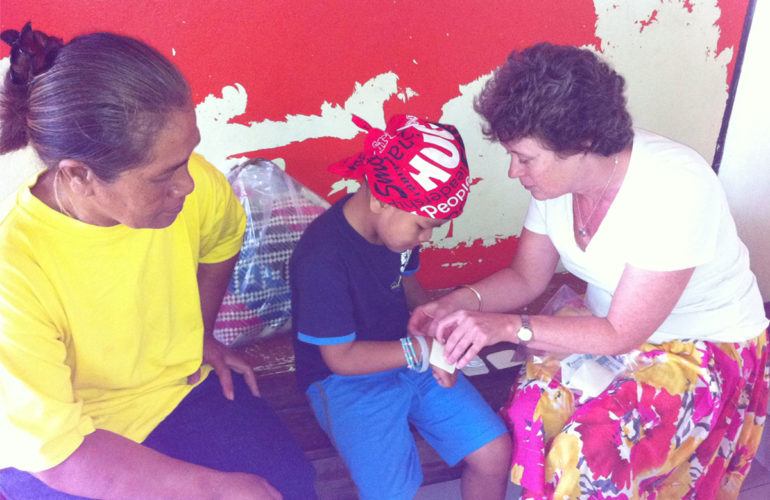 Since 2006 a working group has been involved in finding out how to best support the needs of the Pacific countries who have a relatively small number of children with cancer each year – around 50 in Fiji, 10-12 in Samoa and 7-8 in Tonga. All these countries have identified paediatric oncology as an area requiring improved skills and it was generally felt that they had plenty of support in the other diseases and issues common to developing nations.

Over the past 7 years, Fiji has been twinned with Christchurch to provide support, training and advice, and Tonga and Samoa with Auckland. The aim of this programme is to select the children with good risk disease who can have the majority of their treatment in their own countries. This reduces the cost for the countries, as well as having a positive flow on effect for paediatric services generally. However, even with the best support, there will still be a number of children with childhood cancer (maybe 40-50%) whose disease will be incurable or require very intensive treatment that would be outside of the funding available. For these children, good palliative care is the aim.

Barriers to palliative care provision
Culturally, the older people in a family generally have the most important voice and are involved in all decision making. They are much more likely to encourage young parents of a child to consult a faith healer before a Western health professional, and to actively discourage the use of morphine. Traditional practices such as deep massage may lead to the rupture of abdominal tumours and spread of disease. Many of the faith healers also discourage the use of morphine – it is believed to be only for old people who are dying, whereas children can be cured by traditional practices and prayer.


In terms of this programme, our emphasis in palliative care has been on education and support. We have run a number of teaching sessions both in the islands and New Zealand, focussing on symptom control and communicating with families. We also have good relationships with NGO’s in the islands, particularly the Child Cancer Foundation of Tonga and the Samoan Cancer Society. Both these groups contact us via email for advice on particular children they know of with palliative needs. The Samoan Cancer Society employ a Samoan nurse who will visit at home and can coordinate the care the children receive. We also have provided written guidelines for the hospital health professionals on common palliative issues in children. We have had a focus on alternatives to medication for symptom management, and also on educating the nursing staff as traditionally they are the health professionals most likely to spend their entire careers in the one place.

We have become increasingly confident in the care oncology children with palliative needs will receive. We have been involved with some very proactive and resourceful paediatric nurses and paediatricians. They have embraced any opportunities for education and are eager to work out ways within their own work environments to improve and enhance the current practices. Children with palliative non-malignant disease do not appear to feature at all within the hospital paediatric services – this is an area that needs exploring further in the future.

TVNZ interviews Dr Jane Skeen and Janet Mikkelsen in this four minute video of the work being done in the Pacific Island to support children with cancer. Go to: http://tvnz.co.nz/tagata-pasifika/extra-world-child-cancer-charity-video-5132121