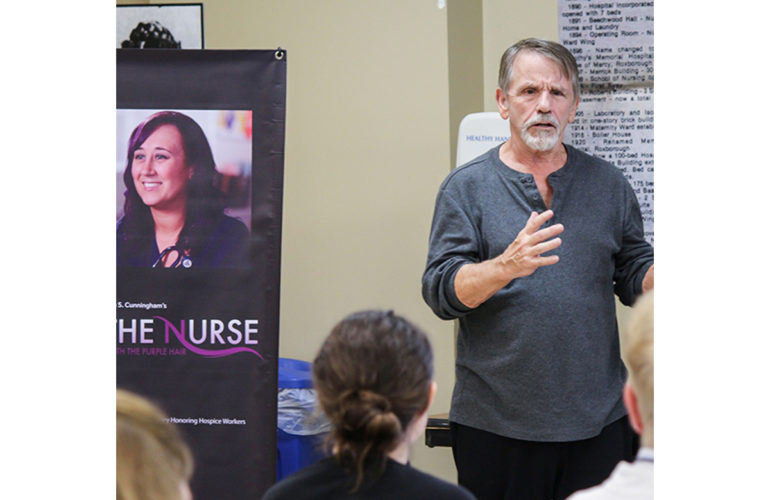 He describes Michelle as: “a wise person, well beyond her years, kind, compassionate and insightful, and a dynamic powerhouse. She cares passionately about really good care for people at the end of their lives, and is doing everything that she can to make this possible.” Although he reminds us that as a single mother in Philadelphia working as a nurse and trying to make ends meet, “she’s a regular person who has learned things that we can all learn from her.”

Used to creating movies where people die in “fun and creative ways,” Sean was struck by the difference between the media’s portrayal of death – “as something to be avoided at all costs” and Michelle’s work in hospice care dealing with “real issues, real people, and real things.”

“The difference is day and night,” says the director.

After speaking to Michelle about her work, Sean was fascinated by the idea of hospice care, not as a depressing job, but rather as a vocation which aims to make each day for each patient the best possible day that it could be.

He decided to draw on his skills to make a difference, to produce a movie to “try to get some of this wisdom and these good stories out there.”

The film follows purple-haired Michelle as she goes about her work, caring for hospice patients and educating medical and nursing students on hospice care. She shares stories of people she has cared for, and the lessons she has learned from them.

Sean has described hospice care as one of the best kept secrets in modern medicine. He said: “one of the things that Michelle told me early on is that people don’t want to learn anything about (hospice care) until they really have to. Here in the US, a lot of time people don’t even know that hospice exists until a few days before somebody dies. Why is it such a big secret? I think that at its core, people think that hospice care and palliative care is about death and dying and for when there is: ‘nothing you can do.’”

He observes: “one of the things that keeps us alive is staying away from things that will kill us, things that lead us to death or to an awareness of death. We just don’t want to go there.

“What I’ve discovered is that hospice care isn’t about death, it’s about life. It’s about celebration of life, about figuring out how to live as fully and completely as you possibly can. It’s not quitting. It’s not giving up. It’s embracing the life that you’ve got. But people don’t want to know about it.”

A key aim for the film is to educate healthcare workers on hospice and palliative care. Sean says: “We are trying to get to medical schools to screen this for interns and residents, and also nursing schools. We want to get healthcare givers much more aware of the services that are available. To make them understand that hospice isn’t quitting. Hospice is containing. Hospice is a celebration of life. Somehow or another, you have to get these ideas out there into the mainstream.”

Getting people to talk about hospice care and their own end of life wishes is another goal for the film. Sean explains: “When people see this movie, at the end of it suddenly they want to talk – and they want to think – of things that they never would have talked about or thought about before they saw it. Suddenly they are prepared to talk and prepared to think, and that’s really a great tool to have.”

Sean has always been an advocate for advance care planning, but after making this film, he admits that he is starting to feel passionately about the topic. He says: “if you want your life to be a certain way, how is anybody supposed to know it if you don’t talk about it? And the time to talk about it is when you’re healthy and feeing good and when the people around you are healthy and feeling good.

“That’s what a lot of these conversations that we hope people are going to start to have will happen early,” he says “so when somebody you love is sick, you will know what they want. They may not want to have a ventilator down their throat or to be ill from chemotherapy, or any number of different things. Find out what people want and then you can do the best you can to accommodate it.”

He says: “We’re starting to create some information and traction about what this whole process of getting end of life care is, and it’s a very positive thing, because (currently) we are ignorant about it, we fear it.”

Sean compares the growing awareness of hospice care and the need to speak about your wishes for end of life care to the ‘Prepared Childbirth’ or ‘Lamaze’ movement. He says: “it was essentially education, not just of the women, but also of the other family members on what happens in this process and how can you subtract the fear and the ignorance and let it be the natural process it is.” He says: “Now it’s become institutionalised in our culture that the family is part of the birthing process.”

Asked whether he thinks society would be different if everybody truly understood hospice care, Sean replies emphatically: “You bet!”

He says: “I don’t think that is going to happen right away, but I do think that it’s possible to understand it a little bit better. So that when somebody that you love is sick, or if you yourself are getting sick or getting to the end of your life, you understand that there are these wonderful, caring, smart, compassionate people out there to care for you, to answer your questions, to laugh with you and to have fun. It’s really a good thing and I think that the earlier people can get involved in hospice, the better.”

Is Sean going to keep working in the hospice movement? Chances are, yes. “I love the people that I’ve met and I think the work that is being done is important,” he says. “It’s good to know that I’ll be able to help in my own small way.”

Find out more about ‘The Nurse with the Purple Hair’, including information on hosting a screening, on the film’s website.