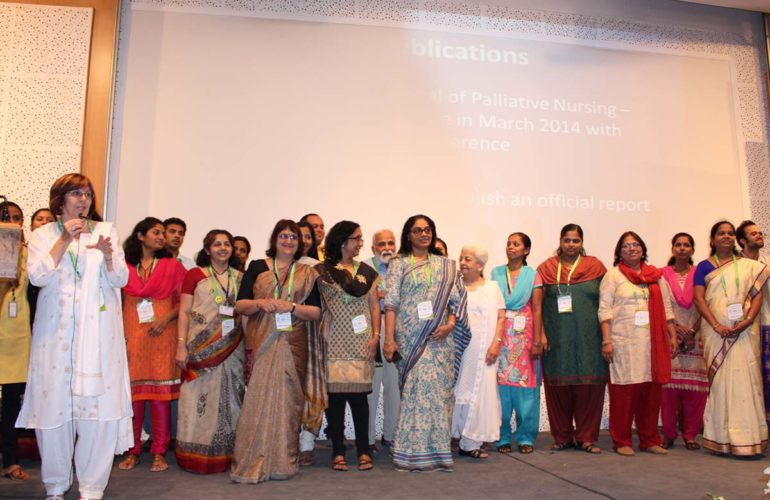 “Taking the decision to hold our very first international conference was an act of courage, but deciding to hold it in India, where a conference of this nature had never been held before, was a giant leap of faith. And it paid off.” These were the words of ICPCN CEO, Joan Marston as she reflected on the enormous success of the conference. “We wanted to bring the foremost experts in the field to a country where there is an overwhelming need for children’s palliative care services and expertise and we were successful in doing just that.” She went on to add: “The fact that in his speech at the Inaugural function the minister of health for the Maharashtra region, the honourable Suresh Shetty, promised a roll out of children’s palliative care services across the region proves the value of bringing a conference like this to India. We will continue to ensure that future conferences are held in places where they are needed and can do the most good.”

While registration was initially slow, by the first day of the conference close to 250 people had registered, with around half of these coming from countries outside of India. In total, delegates from 32 countries were represented at the conference, bringing with them an exciting mix of experience and expertise to share with others.

Substantial lineup of speakers
The impressive and substantial line up of speakers for the plenary sessions added academic weight to the conference and their presentations covered a broad range of topics such as education in children’s palliative care, mindfulness and care for the caregiver, access to opioids, ethical decision making and neonatal palliative care. The conference was also honoured to have Sister Frances Dominica, the founder of the first children’s hospice, as the opening speaker. Sister Frances’ touching presentation on the events that led to the opening of Helen and then Douglas House in Oxford, tied in perfectly with the theme of the conference, which was a call to move from ideas to action.

The standard of the presentations and the posters was also exceptionally high and a testament to the excellent selection process carried out by the conference Scientific committee, headed by Prof Julia Downing. The pre conference workshops also proved to be popular with over 100 registrations on the day.

Short films
Another exciting feature of the conference were a selection of previews of the ‘Little Stars’ series of short films expertly filmed and directed by Mike and Sue Hill of Moonshine Movies (the makers of the Life Before Death films). These moving short films featured stories of children and young adults and their families benefitting from palliative care and had been  filmed in South Africa, Australia and the United States. A selection of these stories can be viewed on the Little Stars website at www.littlestars.tv

Happy Feet Children’s Hospice
Appropriately, as the conference drew to its final closing, the delegates heard about the vision of two young entrepreneurs, Abishek Tatiya and Mansi Shah, determined to open the first Day Children’s Hospice in India to be known as ‘Happy Feet Hospice‘. The delegates were called on to assist where they could to help get this project off the ground.

Declaration
A declaration, known as the ICPCN Mumbai Declaration 2014, was issued at the end of the conference in which those present called upon governments around the world to improve access to high quality children’s palliative care services and made a particular call upon the Belgian government not to pass a bill allowing children to be euthanased in that country.

Responses from delegates
Some delegates asked about their experience of the conference, had the following to say:

“It was very educating and the knowledge we gained here will help us to set up a paediatric palliative care programme in our own country.” Caroline Okere, Nigeria.

“There were so many countries represented with different questions to ask. We could all learn from each other. It was most valuable.” Dr Andre Potters, The Netherlands

“I am motivated to go back home and continue to push for more and better children’s palliative care in my country.” Veronica Thambo, Zambia.

“(The conference) way exceeded my expectations. I could not have enjoyed it more, from the content of the talks to the high calibre of the speakers. It has ‘renewed’ me!” Jenny Hunt, Zimbabwe

And the parting words to the delegates from conference co-chair, Joan Marston, who had the original vision for the conference were. “Take positive action. Be the champion these children need.”