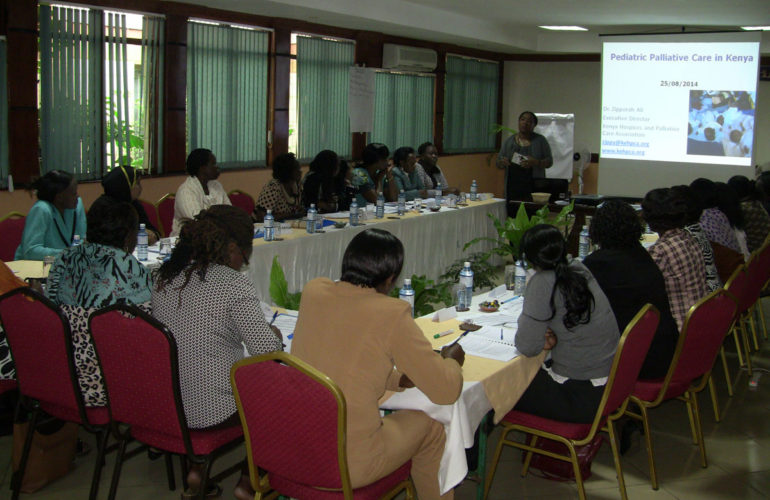 Recent statistics from a collaborative research project between International Children’s Palliative Care Network (ICPCN) and UNICEF indicate that less than 1% of children in Kenya receive palliative care despite most children suffering from life threatening illnesses as a result of increasing incidence of Non Communicable Diseases.

Among the recommendations from the report was the expansion of children’s palliative care education as a vital step towards ensuring a wider dissemination of knowledge and skill in palliative care.

It is in this effort, Kenya Hospices and Palliative Care Association (KEHPCA) is conducting a four day introduction to paediatric palliative care to 22 health care workers from 11 Level 5 Hospitals to empower them knowledge wise on the needs of children with life threatening illnesses and how to address them.

In her opening remarks, KEHPCA Executive Director Dr Zipporah Ali said that there was need for health care workers to work as a team to realize the holistic feature of palliative care to both adults and children.

“We need to be able to control children’s pain and other distressing symptoms to both the child and the family,” said Dr Ali.

Dr Ali presented statistics indicating that of the 9.1million children aged 0-19years who die worldwide, 4.1 are from Africa hence the need to find out how these children are dying and offer the desired support towards making their end of life more comfortable.

She mentioned that gaps in policy and strategy framework is part of the factors limiting access to paediatric palliative care adding that the association is addressing this gap through continued advocacy that has seen palliative care integrated into several government documents.

Dr Ali encouraged the trainees to keep advocating for palliative care policies at their county level following the devolved system of governance in the country given that palliative care and paediatric palliative care are not structurally provided for in the current health care system.

“We are empowering you as players in the health care system so that you in turn empower the people at your institutions,” said Dr Ali.

She indicated that limited resources for provision of children palliative care lead to organisational capacity gaps, a hindrance to advancement of these care among children with life threatening illnesses.

“Multidisciplinary teams are not available sometimes and we have to multitask as counselors, nutritionists and spiritual leaders among others besides being nurses or doctors ” said Dr Ali.

The Executive Director said that sometimes doctors can learn a lot from nurses urging them not to dismiss recommendations from these health care counterparts.

The participants had a chance to share their experiences with children from their working stations.

Phelistus Kombo, a palliative care nurse said that her case was a patient who died and they did follow up to the family (wife) but forgot to address needs of the children. Since the wife was sometimes coming to the clinic for follow up, the daughter asked if she could accompany the mum to see the nurses who were taking care of her father. At the clinic, the daughter asked what her father was ailing from. It is then that it dawned on the nurse that they had forgotten about the child by assuming that she was a kid. ‘I felt like I did not do anything to the family at that point.’ She said that it is at this point that she learnt that they have been assuming that children are young and do not need much support as adults.

Teresiah Matheka, a nurse working in the surgical ward said that she was called to disclose a life limiting condition to a 12-year-old child. The parents did not want the child to know about the illness but the child kept insisting on knowing. The child was concerned of isolation at school and refused to take drugs until the condition was revealed. After seeking consent from the parents, the nurse disclosed the condition to the child who coped well and was happy to receive all the information.

Among their expectations is to be empowered on areas of communication, managing children pain, understanding a child’s spirituality and ethical issues surrounding paediatric palliative care.

The training brings together two participants from each of the 11 Level 5 hospitals that have integrated palliative care (one from paediatrics department and another from the palliative care unit) as a form of fostering collaboration towards strengthening support to children in need of palliative care.