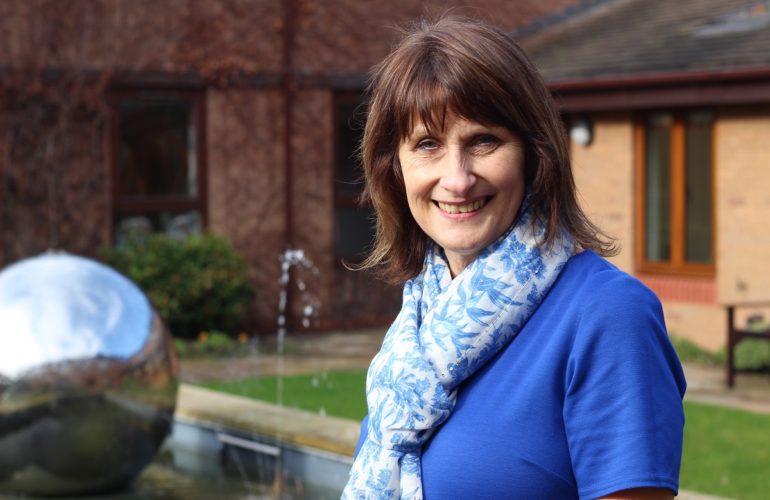 Natalie started her nursing career aged seventeen, as a cadet nurse on the special care baby unit at the Duchess of York, a small children’s hospital in Burnage, Greater Manchester.  She trained as a paediatric nurse and qualified as a Registered Nurse in 1974.

Years later, after marrying and raising a family, she read in a newspaper that a children’s hospice was being built in Didsbury. She joined Francis House when there were only four other children’s hospices in the UK in 1991.

Commenting on the hospice, she said:

“It was just amazing, a lovely homely setting with carpets and matching curtains, all about the care of the whole family. I had just done a return to nursing course and my project was on family-centred care. Understanding that respite would also be provided for the families really appealed to me.”

“My whole experience here has been one of discovery. There are many tasks and nursing procedures to be carried out, but within a shift there will be opportunities where you will just sit and read a story to a child or play a game.”

The highlight of working with families

Seven children’s bedrooms and seven double family bedrooms give parents a well-earned rest.  After comforting a young girl who awoke one night, Natalie discovered from the child’s mother the next day that she had held her in exactly the same way that she did.

“In hospital that just would not have happened, as there would not have been anybody there with the time to do that. There was real job satisfaction in that the parents trusted us enough to go and get a good night’s sleep.”

The children that came to Francis House in those early days had life-limiting conditions that are still found today, but their life expectancy was shorter.

Medical interventions now available, including gastrostomies and tracheostomies that help with swallowing and breathing problems, mean that there are less chest infections that previously resulted in an earlier death.

Francis House prides itself on being a home from home where families can feel at ease and relaxed. At the same time, a very high level of clinical care is provided by the team including caring for children and young people on ventilators and giving intravenous antibiotics.

Whilst caring for the four year-old sister of one of the first children to pass away at Francis House, Natalie developed an interest in bereavement support, in particular support for the siblings. She said:

“The mum and dad were understandably absorbed with the child who was dying, and I could see what it was taking out of them. I spent time playing with her little sister. Listening to her it opened my eyes to what it must be like for the siblings.”

Many years later at a Memory Day, the family came back. Now as a teenager, the sister shared her precious memories as they talked for hours. Natalie believes the experience helped her finish the story.

The ‘Shining Stars’ bereaved siblings support group was set up by Natalie and a group of colleagues in 2000. Describing its purpose, she said:

“Working with bereaved brothers and sisters and helping them to understand grief at a level appropriate for their age, and giving them the tools to help deal with their bereavement is so important for their future lives.”

“In this job you are not making anybody better, but what you are doing is supporting them through it. When you see people able to move on from some of the most painful situations, that they have worked through it and that you have been part of helping them it gives you a real buzz.”

In 1991 Natalie met HRH Diana Princess of Wales when she opened Francis House.  Then to mark their 25th anniversary last year, the charity celebrated the official opening of Francis Lodge by the Duke and Duchess of Cambridge – a new wing of the hospice for teenagers and young adults.

Commenting on the facilities, Natalie said:

“It has been lovely to be here to see Francis Lodge develop. Time to spend with children, young people and their families is the real commodity that we have at Francis House. I know we have a fabulous building, brilliant staff and facilities, it really is a unique place, but I think time is one thing that we really have.”

“I have worked with remarkable colleagues and met extraordinary families, there will always be part of Francis House in my heart.”

Francis House is seeking nurses to join the care team, to find out more visit the staff page at Francis House