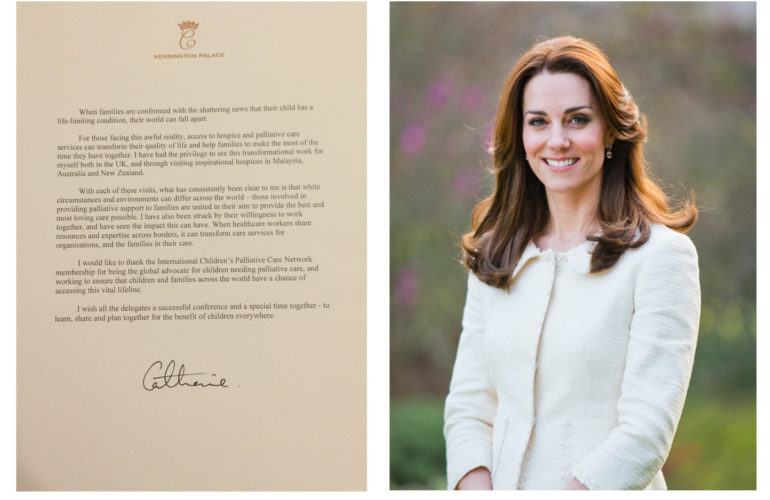 The evening began with the national anthem of Argentina followed by glorious renditions of songs from the Argentine Colón Theatre Choir which had the audience on their feet in appreciation. This was followed by warm messages of welcome and congratulations from local dignitaries which included a representative of the Argentine Ministry of Health, the President of the Sociedad Argentina De Pediatria, the presidents of the ALCP and the Asociación Argentina de Medicina y Cuidados Paliativos (Argentine Association of Children’s Palliative Care)  The hard work of the conference organisers was commended and the importance of raising further awareness and expanding provision in the Latin American region was repeatedly emphasised.

Message from HRH, the Duchess of Cambridge
The conference delegates were honoured to hear a number of messages of support from around the world by highly esteemed individuals with a heart for children’s palliative care. Included in these messages of support was a letter from the Vatican acknowledging the value of the ICPCN Now campaign and a letter from HRH the Duchess of Cambridge in which she showed her true understanding and compassion for children with life limiting illnesses and thanked the ICPCN membership for being the voice for these children and their families.

In a video message from Cape Town, South Africa, Archbishop Emeritus Desmond Tutu spoke of the valuable work done by children’s palliative care professionals, saying that “when children suffer, God cries; when we help these children, we wipe Gods tears.”

The opening ceremony reminded all in attendance of the importance of raising awareness of children’s palliative care NOW!