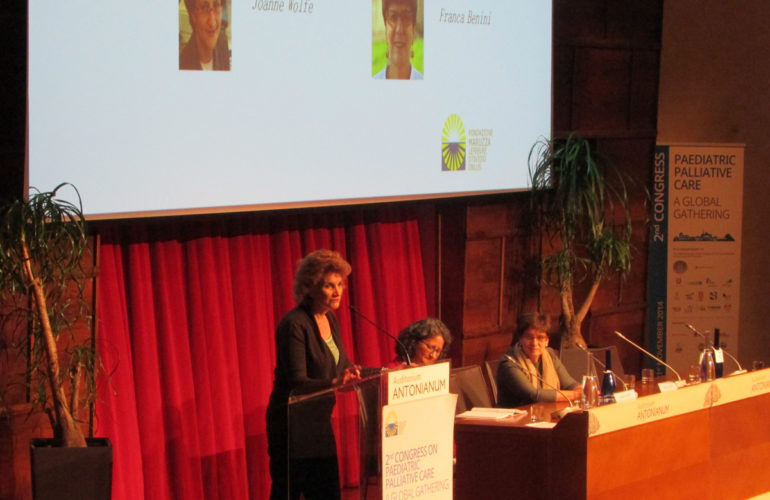 Boasting a line up of leading plenary speakers and presenters and held in the spacious and elegant Auditorium Antonianum in the centre of the beautiful and historic city of Rome, there was little in the way of knowledge, experience, culture and beauty that the 2nd Congress on Paediatric Palliative Care: A Global Gathering did not offer the 438 delegates who travelled there from 55 countries around the globe to attend.

The 2nd Congress on Paediatric Palliative Care: A Global Gathering” that took place from 19 – 21 November in Rome afforded delegates a wonderful opportunity to deepen their knowledge and the application of palliative care by focusing on the children’s needs as well as on the needs of the families and not just on the illness affecting them. The congress programme covered numerous topics relevant to professional development about a specialty not fully understood by the general public.

The high calibre of the speakers and presenters, the smooth running of the congress, the beautiful setting and even the balmy November weather all contributed to a memorable experience for the attendees.

At the opening ceremony on Wednesday 19 November, young researchers were recognised with Malin Lövgren from Sweden being awarded the No Pain for Children prize for her work on her study on grieving children and advice to healthcare personnel who work with children who have cancer and their siblings.

Prof Ann Goldman was the worthy recipient of the Vittorio Ventafridda Award, created in 2007 in honour of Vittorio Ventafridda. This biannual award is presented to those who have demonstrated outstanding initiative and enterprise in the palliative care sector.

The official release of the Little Stars project took place at the ceremony by Mike and Sue Hill from Moonshine Movies. Over the coming year a new short film will be released every 2 weeks.

At the end of the opening ceremony, Silvia Lefebvre of the Fondazione Maruzza and Joan Marston of ICPCN announced a new collaboration between the two organisations to be known as the Awareness Alliance, which aims to raise awareness of children’s palliative care around the world.

Keynote and plenary speakers at this conference included the following leaders in the field:

Speaking of the impact of the conference, Silvia Lefebvre of the Fondazione Maruzza said that she believes the presence of the 438 delegates from 55 countries around the world was a clear indication of how the interest in palliative care for children is growing. Describing Italy’s progress in the development of paediatric palliative care, she had this to say: “Italy is internationally recognised as having one of the best legislations for safeguarding the rights of minors affected by life-limiting and life-threatening illness. The approval of law 38/2010 made Italy a country to be proud of.”

Italy was the first country in Europe to approve a law (38/2010) guaranteeing a child’s right to paediatric palliative care and pain management therapy. Children affected by life-limiting and life-threatening illness have unique care needs that are very different to those of adults; palliative care for children requires efficient organisation, specific skills and properly trained practitioners.

You can click here to watch a video on the final conclusions of the congress, which was perfectly summed up by a delegate on Twitter who wrote: “I have to be honest, if you did not make it to #PPCRome14 you missed out. This is AWESOME!”

The 3rd Congress in Paediatric Palliative care will take place on 16 November 2016 in Rome.