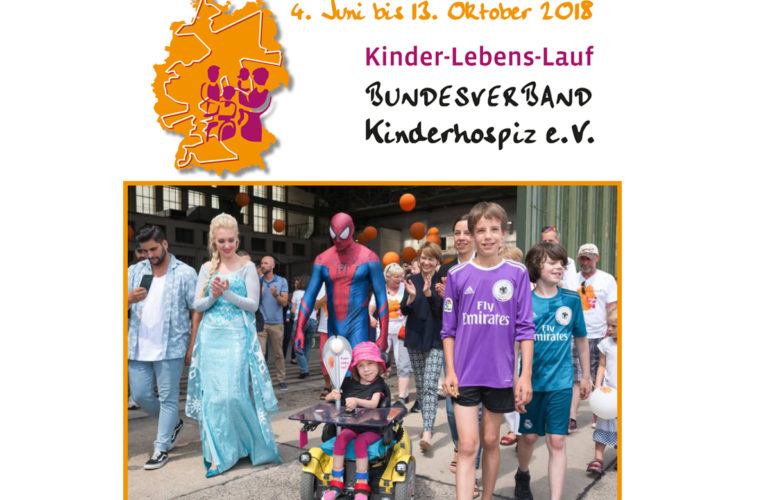 It is estimated that there are 40,000 families in Germany who will suffer the loss of a child before adulthood due to life-limiting or life-threatening illness. Members of the German national association of children’s hospices, Bundesverband Kinderhospiz e.V., including outpatient and in-patient children’s hospice facilities will participate in the Kinder-Lebens-Lauf (Children’s Life Run) around the country this summer – an event that will take place in around 100 stages and last an estimated 132 days. Thousands of supporters of the association and its member organisations have committed to run, walk, cycle, ride, roll in a wheelchair and even travel in a hospital bed as they carry a specially crafted ‘Angel Torch’ around the whole of Germany.

The event was launched by Sabine Kraft, Chair of the International Children’s Palliative Care Network (ICPCN) Board of Trustees and CEO of Bundesverband Kinderhospiz e.V. the National Association of Children’s Hospices in Germany on the final day of the 3rd ICPCN Conference in Durban, South Africa on 2 June and began in reality in Berlin on 4 June.

The Children’s Life Run started in Hangar 5 at Tempelhof Airport when Elke Büdenbender, the wife of Federal President Frank-Walter Sheinmeier and patron of the Children’s Life Run handed the ‘Angel Torch’ to five-year old Mila. Mila covered the first few metres of the more than 6 000 kilometer journey in her wheelchair flanked by her two brothers.

“With this torch we send a light of hope into the world,” said Elke Büdenbender, whose commitment is to help bring the needs and wishes of affected families into the spotlight.

Thanks to a GPS transmitter which has been fitted, the exact location of he angel torch can be followed on its journey through Germany on the www.kinder-lebens-lauf.de website. The journey will end on 13 October, World Hospice and Palliative Care Day.

Click here to watch a YouTube video showing the start of the epic journey and a German TV News interview with Ms Sabine Kraft about the event.

You can also follow the journey of the Angel Torch by liking the Bundesverband Kinderhospiz e.V. Facebook page.

Ms. Sabine Kraft has a vision for the Kinder-Lebens-Lauf, being a worldwide pilgrimage throughout every participating country, from ICPCN member to ICPCN member, always accompanied by the ‘angel torch’ in the hopes of bringing much needed attention to all children suffering from a life-limiting illness. For this purpose, Ms. Kraft donated an ‘angel-torch’ to numerous international delegates attending the ICPCN conference in Durban, with the hope of seeing this powerful symbol travelling around the world and returning to the next ICPCN Conference in 2020!