Travel ban in U.S. separates dying children from their families 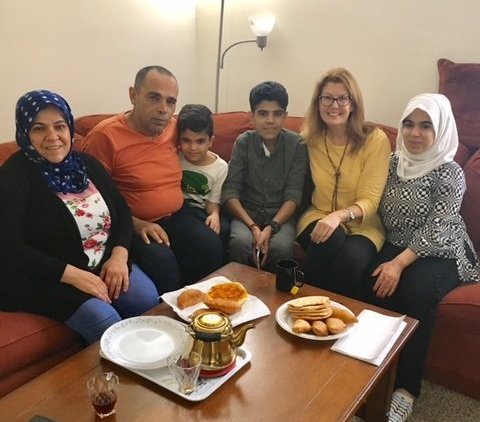 Lanise (second from right) with one of her current paediatric hospice families. The family is originally from Syria and has been negatively affected by the ban on travel from several Muslim-majority countries.

Paediatric Palliative Care nurse, Lanise Shortell, has written an opinion piece for the Huffington Post in which she exposes the disastrous consequences of the US travel ban on some of the children and families in her care.

Highlighting some of the children and families the ban has affected, she writes “As a pediatric hospice nurse, I’ve witnessed how family separation affects both the dying and the bereaved.

In March an 11-year-old boy from the Democratic Republic of the Congo died under my care before he could be reunited with his mother and four siblings, who remain in a refugee camp in Zimbabwe.

I cared for a newborn in May who never got to meet her grandparents from Venezuela, adding indescribable layers of grief to an already horrifying reality.”

My team and I are caring for a teenage boy originally from Syria. He will likely never see his adult sisters again, who aren’t allowed into the country under Trump’s travel ban. This refusal to allow immediate family members to be with dying children is an infringement on their human rights.”

Lanise goes on to describe the kind of physical and emotional support that paediatric pallaitive care provides to both the child and family members and how vital it is for the quality of life of a sick child to be connected to family members. She also points to the need for parents to be involved in their child’s care, saying, “Family involvement is so intertwined with the bereavement process that research has likened a patient’s immediate family members to drugs. The presence of loved ones decreases anxiety for dying children, and the opposite is also true: Extensive research shows that the absence of parents drastically increases anxiety, which can amplify a child’s physical pain.”

The piece describes how the present  waiver application process does not provide clear guidance on how families can apply so when an immediate family member is dying the low acceptance rate leaves them feeling helpless and held ransom by their grief. “Time is a very limited resource for pediatric hospice families- one that’s quickly drained when caught up in an arduous process with no promise of approval,” writes Lanise.

The article calls on the U.S. government to reduce the impact of grief on separated families by implementing exceptions that provide access to travel ban waivers for immediate family members of dying children.

You are encouraged to read the full article here.