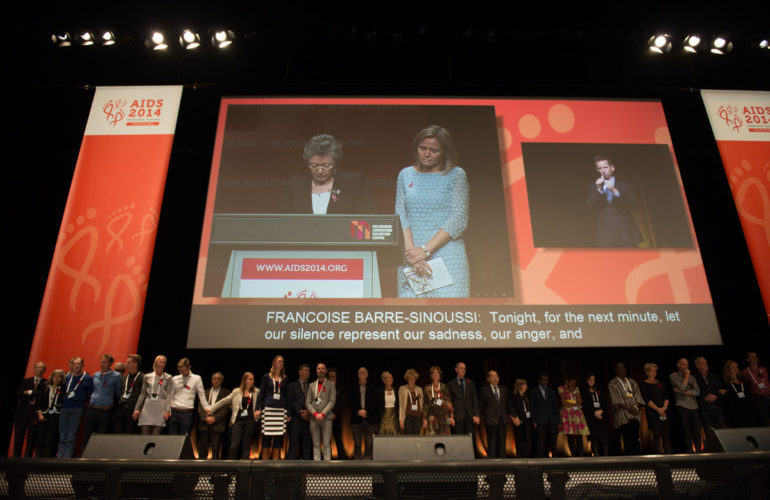 Representatives of the organisations that lost colleagues – the World Health Organisation, AIDS Fonds, Stop AIDS Now, The Female Health Company, and the Amsterdam Institute for Global Health and Development – joined eleven former, present and future presidents of the International AIDS Society (IAS) and members of the Dutch HIV community on the main stage in front of more than 5000 delegates from around the world for a moment of remembrance.

“I strongly believe that all of us being here for the next week to discuss, to debate and to learn is indeed what our colleagues who are no longer with us would have wanted,” Professor Françoise Barré-Sinoussi, International Conference Chair of AIDS 2014 and President of the International AIDS Society told the gathering. “We will remember their legacy and forever keep them in our hearts.”

The Worldwide Palliative Care Alliance published a statement of condolence and solidarity with family and friends of those who lost their lives in the tragedy.

The AIDS 2014 Melbourne Declaration was also referred to by the speakers on the first day of the conference, reaffirming the importance of non-discrimination for an effective response to HIV and, more in general, to public health programmes.

The signatories to the declaration affirm that non-discrimination is fundamental to an evidence-based, rights-based and gender transformative response to HIV and effective public health programmes.

The declaration recognises that to defeat HIV and achieve universal access to HIV prevention, treatment, care and support – nobody should be criminalized or discriminated against because of their gender, age, race, ethnicity, disability, religious or spiritual beliefs, country of origin, national status, sexual orientation, gender identity, status as a sex worker, prisoner or detainee, because they use or have used illicit drugs or because they are living with HIV.

Read more about the 20th International AIDS Conference on the conference website.