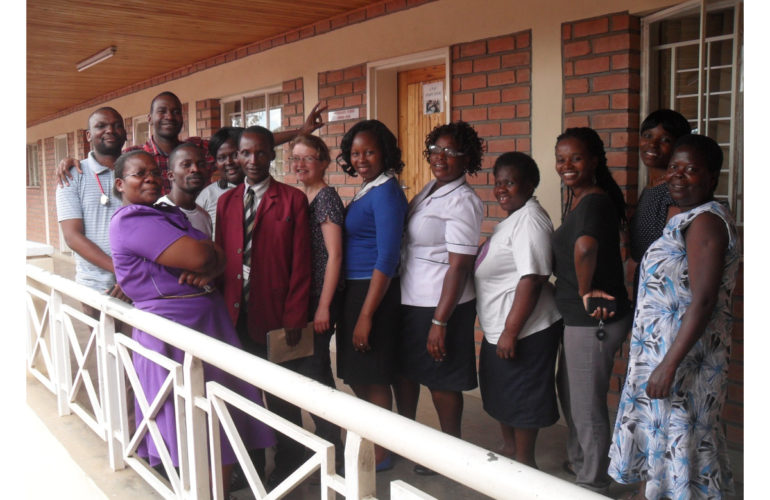 I am a final year medical student at Dundee University in Scotland. As part of our training, we are encouraged to undertake an elective placement abroad to widen our understanding of health and healthcare in the global context.

After receiving advice and a Student Elective Bursary from EMMS International, I arrived at the Palliative Care Support Trust (PCST), based in Queen Elizabeth Central Hospital, Blantyre, Malawi, in February 2015.

I will never regret the choice I made to come to Malawi. There are so many great and important lessons that I will take home with me from this six week rotation with Tiyanjane and Umodzi palliative care teams at PCST. I would like to share five lessons I learned during my time here:

1. Success in palliative care is not measured in numbers

I have seen what so few people can accomplish if they work as a team.

A good example is the care given to a 15 year old boy with metastatic Ewing’s sarcoma. While the patient was in the ward, the team was involved in counselling and decision making discussions around end of life preferences. A good understanding led to discharge from the hospital so that the boy could be cared for at home.

A day after discharge from the hospital, the PCST team received a distress call from the family of the patient. The administrative officer had to double as an emergency driver to get the team to their home.

I went with the team. We dispensed some more liquid morphine for pain control, counselled further on the diagnosis and prognosis, and assessed the complex social issues with the help of our social worker. It was team work in action!

This all required a lot of work, but as I was to learn, success in palliative care in not measured in numbers of patients seen, but rather in meaningful improvements in patient’s lives.

I am never going to forget the effort put in by a PCST nurse with one grandmother who was resisting the idea of nasogastric tube feeding for her four year old granddaughter.

She could only be convinced after more than two hours of patiently discussing her issues and fear. It required time as well as empathy and understanding.

It would be easy to get frustrated at this kind of situation, but the Umodzi team recognises that holistic care should extend to the family also.

If surgeons save lives on the operating theatre, then the Umodzi team save lives with their conversations!

3. An effective team is a happy team

Teamwork in palliative care is recognised as an important ingredient for success. I saw some great examples of effective multidisciplinary team work at PCST.

The passion of the team was inspiring, and each was an important advocate for furthering good palliative care.

While I was there, the team was organising Palliative Care Day events at district hospital level, and welcomed with open arms independent NGOs and groups who were interested in establishing palliative care in other areas, and were even planning airtime on radio shows!

The weekly team meetings helped raise any issues and encouraged this team spirit. Each person looked out for the other. They pray together and have set a Wednesday morning as a day of prayer for the team. Indeed, I even heard team was referred to as “my family”!

4. Our presence is a service in itself

On one home visit, deep in the countryside, we reached a river with no apparent crossing. I was sure we were going to have to turn back until a passerby showed us where they crossed. Taking off our shoes and socks and rolling up our trousers, we waded across the river. Our clinical officer carried the medical bag as we walked as soldiers for the good!

Our patient lived with his brother, as his own house had been washed away by the recent floods in the country. It was a bare brick house, with no furniture and mud floors.

It was hot, and my trouser legs were far from dry! It turned out that there were no physical symptoms to be relieved. However, we did a full physical, social, psychological and spiritual assessment and we were able to reassure the family in how they were looking after the patient.

“I didn’t think you would ever come,” whispered the patient eventually from his mat on the floor.  Although we didn’t “do” much or change anything, simply being there for patients and their families, to let them know that they have not been forgotten about, is such a great act of service in itself!

5. Education is key to personal development

For the first time, I have realised just to what extent the person I have become has been shaped by my education, particularly through the critical thinking skills, problem solving skills, academic skills, and interpersonal and team-working skills, that I have had the chance to develop.

This elective has been made possible by the support from EMMS International’s Student Elective Bursary programme. I am sure this elective will play an important part in my continuing formation as a person and as a doctor.

Inspired by the amazing work of the PSCT team here and of Dr Anne Merriman and others’ work with Hospice Africa, I hope that my working career will also be dedicated to establishing good palliative care, both in the UK and abroad.

Thanks to the management of PCST, led by Dr Cornelius Huwa, for making my stay at PCST so comfortable and friendly.

Also, Dr Jane Bates is a great teacher and has taught me so much in the few moments we have been together.

Find out more about the work of EMMS International online.