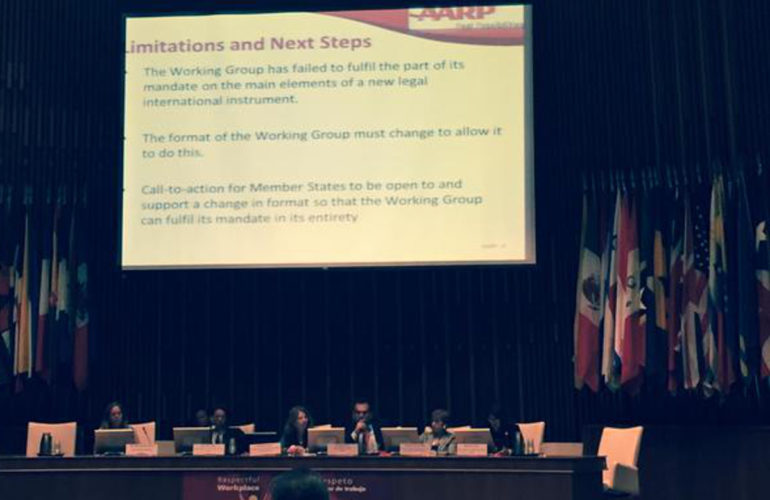 Over 100 dignitaries attended including ambassadors, heads of international agencies, civil society organizations and experts in aging policy. The meeting opened with presentations by the head of PAHO/WHO, Dr Carissa Etienne, Mr Luis Almagro, Secretary General of the Organization of American States (OAS), and a representative from the Economic Commission for Latin America and the Caribbean (ECLAC).

The main purpose of the meeting was to generate support for implementation of the specific actions required under the convention and to increase the number of countries in the Americas that approve the convention.

Additional presentations were given by experts on: ‘Moving toward full inclusion, integration, and participation’ in the Convention. Ms Erica Dhar, Senior Advisor, Office of International Affairs for AARP, spoke as a representative of civil society. Other presenters were from Argentina, Brazil, and Chile.

The international palliative care community worked with PAHO and member states to ensure that palliative care was included in the convention, the first time this has occurred. The wording of the relevant clause is as follows: “State parties shall take steps so that public and private institutions offer non-discriminatory access to comprehensive care to older persons, including palliative care, avoiding isolation, properly managing problems related to fear of death among the terminally ill, and avoiding pain and unnecessary suffering.”

Conventions are legally binding agreements between states, similar to treaties, unlike declarations that are not binding. Each country has to have the convention approved by its legislature. At the OAS meeting this year, five countries signed the convention (Argentina, Brazil, Chile, Costa Rica, and Uruguay). Many more are expected to sign, though the United States and Canada will not. However, they did not oppose the convention’s development.

The OAS & ECLAC through PAHO have made a courageous and important commitment to protect the rights of older persons in the Americas and have made a strong statement about the importance of palliative care and relief of unnecessary suffering. Hopefully other WHO regions will follow their leadership.

I gave the following verbal intervention on behalf of the Worldwide Hospice Palliative Care Alliance: “Good afternoon colleagues and older person advocates. I am Dr Stephen Connor representing the Worldwide Hospice Palliative Care Alliance. The international palliative care community congratulates OAS and PAHO on this historic convention that promises to ensure that the human rights of older persons are protected.

“We especially want to thank OAS and PAHO for including access to palliative care and pain relief as a human right for older persons who make up almost 70% of the 40 million people annually needing palliative care.”

I also asked to be informed on how the leadership envisions palliative care being implemented or expanded in their countries.

For additional information and copies of the relevant documents, visit the PAHO website.