A hospice visit reveals the ‘noun’ and the ‘adjective’ 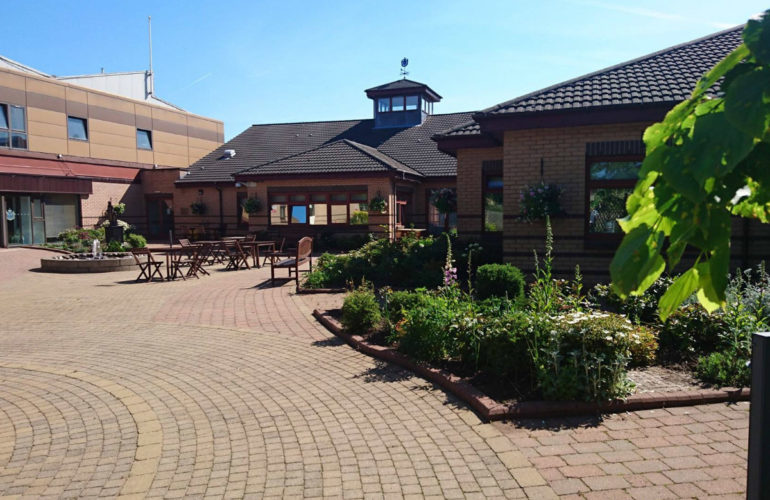 In a recent blog post, he writes: “Hospice as a noun is about the formal organisational structures in which hospice care is delivered – the setting or building, the mode of delivery.

“Hospice the adjective captures the quality and character of care – the attention to detail and the notion that when the quantity of life is limited, then the quality of life must be optimal.

“It is an interesting distinction, but there are also connections and overlaps between each aspect. For me, there is something important about both the setting and the philosophy of care, and the ways in which they intertwine.”

On the invitation of Jacquie Lindsay, director of education, Prof Clark visited St Margaret of Scotland Hospice in Glasgow to deliver a lunchtime lecture.

The hospice was begun in the area by the Sisters of Charity in 1950. Ever since then, it has been developing and growing, based in its own purpose-built accommodation, just yards away from where it first opened its doors to local people.

Prof Clark reports that he began his talk with some of his current preoccupations relating to his work on a biography of Cicely Saunders, moved on to the work of the End of Life Studies Group Wellcome Trust-funded project on global interventions at the end of life, and concluded with the Scottish Government Strategic Framework for Action (SFA) where he is the consulting editor.

After the lecture, Prof Clark was taken around the hospice. He writes how, as they were touring the well-kept gardens, maintained by volunteers from local banks, he saw the end of a bed which had been pushed out into the warm sunshine.

In the bed was an old lady completely covered in blankets and wearing a cosy woollen hat. As they passed she moved slightly, pulling her blanket closer. She was asleep, enjoying the fresh air as it drifted up from the Atlantic shores of Scotland a few miles downriver.

When his host said that some patients ask if they can die outside, Prof Clark found himself saying for the first time: “Come to think of it, I might like to die outside myself.”

Although the Catholic ambience of the hospice was everywhere, he was told that people of many different faiths make use of the space it provides, and that they usually decline any offer for the Christian symbols to be covered up or removed.

He remarks that Cicely Saunders once told him something similar. She had said that those of other faiths had no problem with the Christian ethos of St Christopher’s Hospice; rather they were uncomfortable with postmodern beliefs and the emphasis on a godless ‘spirituality’ instead of formal religion.

He further describes some of the more unusual facilities in the hospice – a swimming pool and jacuzzi, with a gym next door – available for the staff as well as patients to use, installed to promote wellbeing and resilience. Prof Clark admits that he’d never seen a hospice ‘spa’ before!

On their drive back to the station, Lindsay and Prof Clark discussed the future of hospices, hospice finance and policy in Scotland.

“As I sat on the train home it wasn’t hospice finance or policy that stayed with me. Instead my thoughts kept turning to the white haired lady in her hospice bed, snugly tucked up and catching perhaps the last rays of sunshine and Clydeside air that would ever touch her face, in a place where ‘hospice’ the noun and the adjective meet,” concludes Prof Clark.