Care A story of courage and optimism - ehospice

A story of courage and optimism 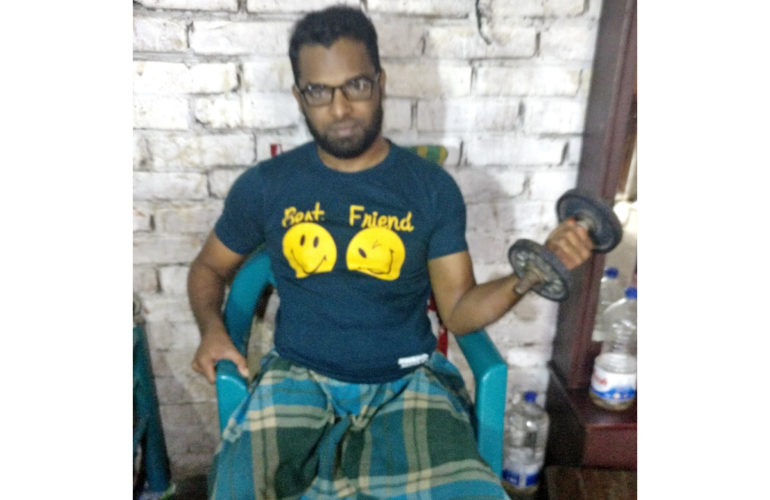 “To me your service is like my mother,” says Md. Alamin, a 31-year-old man accessing palliative care through the Narayanganj Palliative Care project. “You always take care of me like my mother! I am very happy to get such services from you. I always pray from the core of my heart that this service will go a long way, In sha Allah.”

One day during our routine home care visits, the palliative care team met Md. Alamin. What we saw at first glance was a paraplegic man, slumped in a chair, but he had quite a healthy stout body and undoubtedly good looking. We noticed there was a dumbbell beside his chair and that piqued our curiosity.

It was about nine years ago when Alamin slipped on a road side and sustained a severe injury to his cervical region. Initially he became quadriparetic which means he couldn’t move any of his limbs effectively and he became fully bed bound.

Suddenly his life was shattered. He had been living independently from his parents, with a good career. After the incident he became completely dependent on his elderly parents, which led to feelings of anxiety, shame and guilt for him, as he was supposed to be the breadwinner of the family.

He remained bed bound for several months. He developed a deep-seated pressure sore which was later affected by maggots. He had to go through plastic surgery for it. He was suffering not only physically but also mentally.

He struggled daily with not losing hope, keeping himself motivated, overcoming negative thoughts and wanting to gain back his muscle power. He kept counting days during his rehabilitation period thinking of the day he would gain his muscle power back.

After the surgery for his pressure sore, he sought help from the Centre for Rehabilitation of the Paralyzed (CRP). There he was given some training on physiotherapy and some advice on self-care.

He exercised daily as much he could in order to gain his muscle power back. He gradually gained the power of the upper limbs but not the lower ones.

However, he didn’t give up exercising, and later he found passion in it and started body building! His little dumbbells became his favorite tools then. He gained a wheel chair, with the help of which he could even go far away to roam the city by himself.

He has achieved this self-confidence bit by bit, every day. Now the Compassionate Narayanganj team is supporting him for his total care. He has been assigned a volunteer who helps him with some computer outsourcing ideas and has given some training. He has been earning now, working from home for the last four months.

He says: “After my accident, I suffered morbidly and then I learned daily how to overcome it. I motivated myself that I can and I will gain my capabilities. I am not going to be my parents’ burden any longer.”

Alamin developed an interest in volunteering and now has been volunteering with Compassionate Narayanganj for a few months.  He does some voluntary work from home for our project. He has opened a Facebook profile where he regularly posts of our project related news, information and videos.