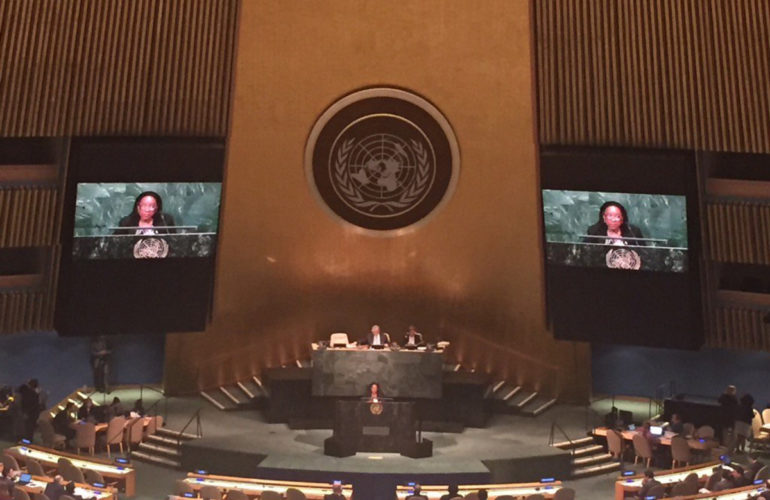 Unfortunately, the failed the War on Drugs – and the associated human rights abuses that have been the legacy of the past few decades – have shaped the current law-enforcement/criminality approach to controlled substances, and it will be a long time before we have a global policy that is truly ‘balanced’.

However, great strides have been made, as evidenced by the stand-alone section on access to controlled substances for medical and scientific use in the session’s Outcome Document which was approved on the first day on the meeting, and a plenary speech at the UNGASS by Dr Zipporah Ali, Executive Director of the Kenya Hospices and Palliative Care Association and Worldwide Hospice Palliative Care Alliance Trustee.

In the run-up to UNGASS 2016, ehospice international has published a series of articles by respected experts on palliative care, pain, controlled medications and human rights, examining how global drug policy affects people in pain.

Dr Katherine Pettus, International Association for Hospice and Palliative Care Advocacy Officer explained how advocates highlighted lack of access to controlled medicines in the preparations for UNGASS 2016. Dr M.R. Rajagopal wrote about the importance of: ‘”Advocacy, advocacy and advocacy,” to help people overcome their fears around taking opioids.

Drs Liz Gwyther, Emmanuel Luyirika and Zipporah Ali brought South African, Ugandan and Kenyan perspectives to reforming policies on controlled substances in Africa, and Dr Joan Marston, CEO of the International Children’s Palliative Care Network, asked: “Why should children suffer?” when the medications to treat their pain are safe, inexpensive and effective.

Dr Jonathan Liberman, Director of the McCabe Centre for Law and Cancer in Australia, argued that the inadequate availability of medicines is the gravest “world drug problem”, while Dr Willem Scholten interrogated institutional barriers for access to opioid analgesics.

In the final article in the series, titled: Advocacy for access to controlled medicines – promoting balanced drug policy for palliative care, Naomi Burke Shyne examined national legislation in excess of recommendations made by international drug treaties, and highlighted some examples of policy reform.

The global need for access to controlled medications for pain relief

According to research carried out by the Worldwide Hospice Palliative Care Alliance (WHPCA) and the WHO, over 40 million people need palliative care annually, half at the end of life.

Almost 80% of these live in low or middle income countries, where access to strong analgesics for pain relief is severely restricted or simply not available. As a result, the WHPCA have estimated that over 18 million people die in pain each year.

Living and Dying in Pain: It doesn’t have to happen

This year, the theme of World Hospice and Palliative Care Day will be: ‘Living and Dying in Pain: It doesn’t have to happen’ in line with the focus this year on the UNGASS. Materials in support of WHPCD will be released starting 2 May. The support of the UN General Assembly and other UN bodies is critical to help address this global crisis.

Dr Stephen Connor, Executive Director of the WHPCA, said: “The World Health Assembly’s 2014 resolution: ‘Strengthening Palliative Care as a component of Comprehensive Care Throughout the Life Course’ cannot be realised without balanced and improved access to strong analgesics for medical use.”

He argued that: “Countries with no or extremely low use of medical opioids need focused technical assistance, registration of essential analgesics, prescriber training, and public education.

“Access to pain relief and palliative care cannot be realised as a human right without addressing this problem.”

The inclusion in the UNGASS 2016 Outcome Document of access to controlled substances for medical purposes is a huge step forward, however, as evidenced by the statistics above, there is still much to be done.

Only when UN bodies and Member States work with civil society organisations and citizens in a purposeful, coordinated way, will people have universal access to essential medications for the relief of their pain.