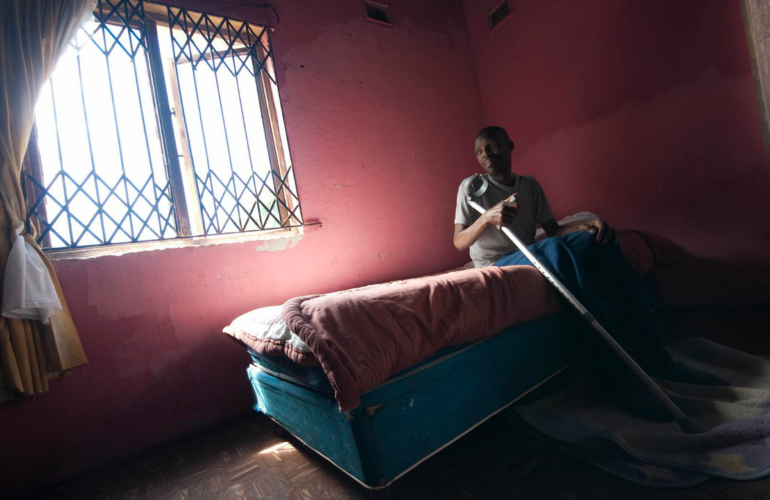 The minsters called for a common approach to TB diagnosis, treatment and follow-up across the region, a fresh injection of funds to support regional efforts against TB and a regional summit on TB and Mining to bring together ministers of health, labour, finance and mines, among other activities.

There were an estimated 548 000 TB deaths in Sub-Saharan Africa in 2011, more than in any other region of the world. Despite recent gains, Sub-Saharan Africa is not currently on track to achieve the international targets of cutting TB and TB/HIV deaths by half by the time that the Millennium Development goals expire in 2015.

“We need three things,” said Motsoaledi: “Firstly, there are too many stakeholders fighting separately, so we need them all to be part of the same process and work in partnership. Secondly we need technical improvements—harmonized diagnosis, treatment and follow-up protocols and a single information system for miners, regardless of which country or mine they come from. Thirdly, we need a regional summit later this year where ministers of mines, finance, labour and health must come together.”

The summit should result in a common approach to treatment and the way in which organizations and companies refer TB patients to one another, as well as a regional database that would be used to track TB patients’ treatment as they travel between countries, Motsoaledi said. He called upon partners already engaged in the issue of TB and Mining—the World Bank, the Stop TB Partnership and the International Organization for Migration—to ensure that the summit will be a success. Referring to a recent meeting with Jim Kim, the President of the World Bank, Motsoaledi acknowledged Kim’s support to the fight against TB, and TB and mining in particular.

Minster Mwinyi of Tanzania supported the engagement of a wider range of organizations on the issue of TB and Mining. “We need to engage the mining companies,” he said. “This can either be through corporate social responsibility or, if necessary, through legislation. Either way they need to be part of the fight against TB.” Adding his support to a summit on TB and Mining, he called for donors to come on board. “Most of the investment in the mining industry comes from Canada, Australia and the UK,” he said. “We believe that we need those countries at the table and I think that they are willing to join us.”

Minister Xaba of Swaziland pointed to successes in the fight against Malaria, which could be built upon for TB. “We have been working with the Global Fund to implement a cross-border programme on Malaria. We strongly feel that the Fund should consider a regional project for TB and mining,” he said. Xaba also welcomed the recent launch of a private sector initiative to fight TB in Africa. The initiative, which forms the seventh ‘pillar’ of the MDG Health Alliance’s strategy aims to draw on companies’ skills and resources to accelerate progress in TB. As a first step, Becton, Dickinson and Company has committed seed funding for a secretariat in South Africa to facilitate work in the region which will be hosted by GBCHealth, a membership organization that aims to engage the private sector with the world’s most pressing global health issues. “I’m very pleased to see the launch of the TB pillar and am excited about its potential to support progress,” Xaba said.

Guests at the event included Pinkie Rosemary Manamolela, the Minister of Health of Lesotho, Anshu Prakash, Joint Secretary, Ministry of Health and Family Welfare, Government of India and representatives from the Commonwealth Secretariat, the UK Department for International Development, the Canadian Government and the Global Fund to Fight AIDS, TB and Malaria.

Watch a webcast of the event on the CGHD website.  CGHD is also hosting a consultation on health in the post 2015 agenda in Geneva at 7:30 CET on 21 May.