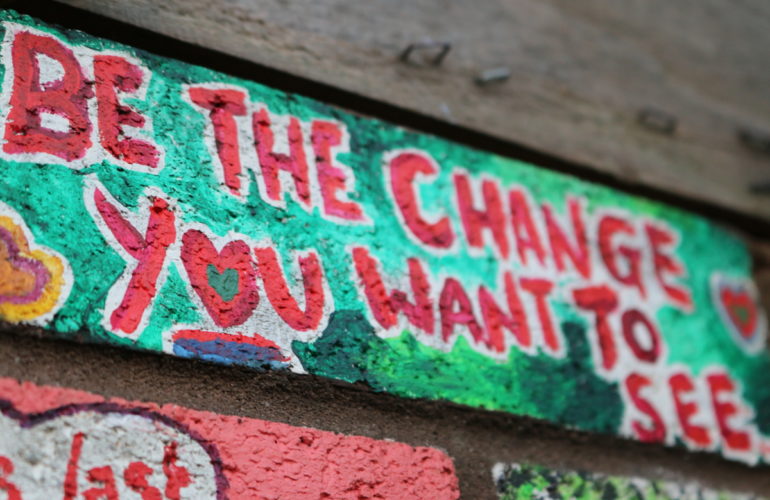 Dr Ros Taylor, National Director for Hospice Care at Hospice UK, welcomed the delegates to the morning plenary, referencing the excellent entertainment at the gala dinner, arguing that – just like jazz music – community palliative care is an example of collaborative improvisation.

Putting the patient at the centre of care

Dr Faith Mwangi-Powell took to the stage for an excellent presentation on ‘Creativity in end of life care in low resource settings’.

Dr Mwangi-Powell drove home the message that, as people working in hospice and palliative care, we need to put patients at the heart of what we do.

She reminded the audience of the WHO public health model for palliative care, arguing that there was a huge gap in this model where the patient should be – at the centre.

Every person in the palliative care context has a role, said Dr Mwangi-Powell, but the most important person in this situation is the patient. She cautioned against the tendency for doctors to arrive in expensive four by fours, armed with many university degrees, as this may lead them to rank their own importance above that of their patients.

Dr Mwangi-Powell took a critical look at what she called the ‘silo mentality’ of focussing on each disease (e.g.: HIV, malaria, cancer) separately, saying that this approach was not helpful. “Why don’t we look at the patient rather than the disease?” she asked.

“We need to do something different to make sure that everyone has access to good palliative care,” she said.

Referring to palliative care initiatives, Dr Mwangi-Powell argued: “Governments are very happy to have the conversation but they are not happy to own it. We need to change this.”

She suggested working collaboratively with government – as well as other partners – to say: “We need to do this and this is how.” She suggested to the audience that, when entering a partnership, they should think not just in terms of what they can get, but rather about what they can bring to the partnership.

She concluded by reiterating the importance of collaborative working, saying: “The more we build a global movement where everyone is saying the same thing, the more we can win.”

Perspectives from Africa in the afternoon sessions

Olanrewaju Onigbogi gave a very interesting talk on the perceptions of religious leaders about end of life spiritual care and support for terminally ill cancer patients in Lagos, Nigeria.

He cited barriers, chiefly disease-related stigma, that often prevented religious leaders from offering this care, and argued that: “We need to do a lot more to find out why people view cancers the way they view them,” and that it is necessary to change this view in order for people to access appropriate spiritual care .

Dr Frank Manase spoke eloquently and passionately about working with families, communities and governments to care for patients.

He reminded those listening of the WHO definition of palliative care and highlighted the words: ‘prevention and relief of suffering,’ arguing that they should always keep these as their priority.

Dr Manase introduced the family centred health care approach and Public-Private Partnership work of the Community Centre for Preventive Medicine, using a case study to illustrate how the health care team can inform and empower the community to help patients.

Professor Alan Kellehear presented the Compassionate Cities Charter, “a short guide to community action that local governments are able to modify to partner with the key social and cultural institutions within their political orbit.”

He noted that the Charter aimed to gain recognition for the public health approach to palliative care at an international level. He said: “This is what we are about, and palliative care services should take this as a serious part of their mission.”

He quoted the four domains of palliative care: physical, emotional, social and spiritual, saying that, as people working with communities, the ‘social’ part of palliative care needs to be always in front of us.

Prof Kellehear said that it is important for palliative care services to recognise that the vast majority of the time spent by people who are dying, or people who are bereaved, is spent with family, with friends, with animal companions – that is, with their community.

In contrast, he said, the time they spend interfacing with health care professionals is a tiny fraction of that. That, he argued, is why it is so important to build community resilience to provide palliative care.

He noted that this is a huge issue that local governments have a responsibility to tackle, and suggested that the Charter is a way of taking something to them, so they know what they need to do.

Dementia-friendly cities, and the digitalisation of dying

Dr Satoko Hotta gave the first afternoon plenary on the topic: National and local dementia strategies in Japan: living with dementia in the community research into informal caregiving in the community.

She offered an overview of community care for people with dementia in Japan, taking the example of Fujinonmiya city as one of the best practices of a dementia-friendly community in the country.

Mark Taubert offered an afternoon session on: The digitalisation of dying. He likened the practice of bereaved people now taking photos and videos of dead and dying to similar (though non-digital) memorialisation in Victorian times.

He raised the question: Given the prevalence of smart phones, tablets, etc. in health care settings across the age groups, is it still correct to say that we no longer talk about death and dying?

Dr Taubert noted that young adults use social media as a platform for self-expression, which can provide caregivers an insight into their emotional state.

He argued that memory boxes are being superseded by digital immortality and digital legacy tools, and suggested that all of these provide a new area for research.

The day closed with a vote on the host country for the 5th International Public Health and Palliative Care conference. Delegates from Lebanon and Canada made impassioned presentations to the audience. Eventually the vote went to Canada. Everyone present expressed their enthusiasm to attend PHPC17 in two years’ time.