Education, learning and international networking- a conversation with David Oliviere 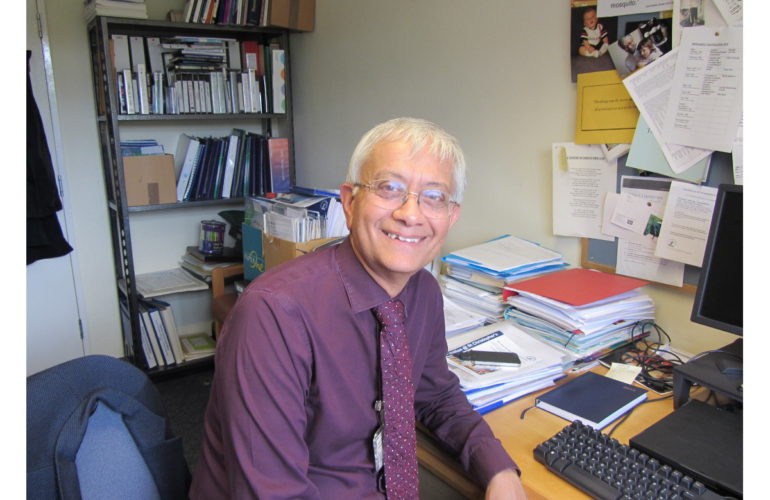 I am at St Christopher’s Hospice in London to interview David Oliviere, who has held the position of Director of Education for 12 years, on the eve of his retirement from this post. David was one of the first people I had contact with in my role as editor of the international edition of ehospice, and has always treated me with the same caring respect that, if the messages in his ‘Goodbye book,’ are anything to go by, was experienced by all who were lucky enough to know and work with him.

David talks about his leaving party as we make our way up to his office, shaking his head as if bewildered by the fact that such a huge number of people would travel- what for some was a very long way- down to St Christopher’s to say so many good things about him.

This quiet humility belies a career of inspired vision, meticulous implementation and dedicated leadership, all of which add up to a huge contribution, both direct and indirect, to the development of palliative care internationally and in the UK.

Asked what the best thing has been about his time at St Christopher’s, David cites three things: the excitement that comes with innovation, the international connections he has made and: “It all boils down to the people.”

Originally planned to stay at St Christopher’s for only three years, David attributes his 12 year stay to the excitement of working in an ever-changing field. He refers to the way in which hospices have needed to adapt to changing demographics and stark economic environments, the growth of patient and user involvement, changes in services and adapting therapeutic methods, as well as the imperative to cope with the changing disease profile of hospice and palliative care patients.

One of these essential adaptations is the idea of ‘Hospice as a hub’. That is, hospice as a centre where people can come and be signposted and get good help from the one place, helping them to navigate the maze of services on offer.

Looking back on his role, David expresses gratitude for the opportunity it has afforded him to exchange ideas with colleagues from around the world. He says: “Working here, literally every week, one meets colleagues from abroad. I can’t imagine any other job I could have got as a social worker or an educationalist where I would have been able to shake hands with, to meet and to really learn from people from other countries.”

Good working relationships with colleagues at St Christopher’s have also been a crucial part of David’s job. He appreciates the way that they: “really think through what I call the realities, not just dressing it up in nice pretty courses and values, but having a foundation that underpins the teaching, and senior management have not only developed services but have really created a base of audit and research that goes along with that.”

The networking is absolutely huge and some colleague connections are made and maintained throughout people’s careers. It’s really marvellous when you subsequently meet people who’ve done the Multi-Professional Week at international conferences and who are now in leadership roles.”

The teaching of the Multi-Professional Week is “very much a partnership” between the four tutors, senior staff at St Christopher’s, and the students who bring experience from their own cultures and contexts.

It is important to tailor the learning to students’ own environments. David tells me: “The one quote that I hang onto from Cicely Saunders is what she said about going out to see what is being done and then see how your own circumstances produce another version. There is a need for diversity in this field.”

This points to the importance of not simply replicating what St Christopher’s does, says David: “It makes no sense to take away what we do in London in 2013 to a very different context, be it Oslo or Mumbai or wherever. People need to find their own products and their own services, tailored to their particular context and resources available.”

In addition to the Multi-Professional courses, St Christopher’s also organises International days where colleagues from various countries can come together and learn about palliative care in their own language.

First, St Christopher’s developed ‘French days,’ which were followed by German days, Italian days, Spanish days, Chinese and Japanese days, all with facilitators from the appropriate country as contexts and available medications vary.

What is valuable about these days is people coming from their own countries and meeting each other for the first time. The opportunity for networking and the consequent development of palliative care is, in David’s own words: “Immense.” He tells me: “Now that palliative care is so well rooted in many countries in the world, it is so important to connect people up with other services in their country and their national associations.”

“The one thing is that people say time and time again that they want to come back to the ‘Mecca’ of palliative care, and although that is very nice, we’re not a museum. What we are is a working hospice where things are changing year by year… We want people to think about their own contribution, what they can take away and use.”

Speaking about the St Christopher’s small bursary programme, David observes that there is a great reciprocity of learning between the teaching hospice and those who come to study there. Each bursary recipient is asked to do a presentation on their work in their own country. David notes: “This plants seeds in us of the realities of the statistics which tell us for example: ‘Only 10% of people can access palliative care’ or ‘60% of people would benefit from palliative care’.

“There is a lot of work to be done,” says David. “You learn to get your own world into proportion and really value what you’ve got.”

David also credits the informal and social contact between peers on the courses as an extremely rich source of learning.

He shared that the most satisfying thing for him is when he is able to watch people who he first met as students at St Christopher’s, take up leadership positions in their own right. He said: “Of course St Christopher’s isn’t the only influence, but I like to think that in a small way, we are giving roots through the bursary opportunity, but also wings to take off in the direction which is necessary, given the needs of their own country, and that is a gratifying thing.”

Read the second part of this interview on ehospice tomorrow.

If you wish to contact David, you can email him at davidoliviere@yahoo.co.uk

To find out more about the Multi-professional weeks and the small bursary programme, visit the Education Centre page on the St Christopher’s Hospice website.