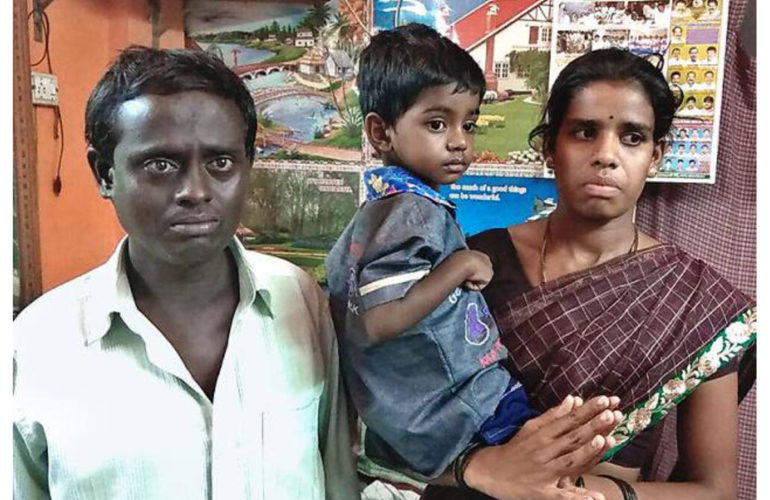 According to the article, the little boy, Mahesh, was diagnosed with cancer a few weeks after he was born. The family took him to some of the major cities of southern India – Chennai, Hyderabad, Vellore and Bangalore – seeking help and treatment. They racked up a debt of 15,00,000 rupees (the equivalent of approximately $22,500) – a prohibitive amount for anybody in a developing country. A devastating amount for a family whose only breadwinner works as a barber in a village.

Each of these cities has established pain and palliative care centers. Yet, no referrals were made to them. Mahesh suffered unnecessary, debilitating pain. He cried constantly, causing his family unrelenting anguish. At the end of four years, the family had sold everything they owned, with no resulting benefit to the child.

On reading this article, palliative care teams in both Hyderabad and Trivandrum started frantically networking in a desperate attempt to track down the family, reach them and try to alleviate Mahesh’s suffering before it was too late. It took the teams close to 48 hours to finally make contact with the father. The family was found in Bangalore, with little Mahesh in an ICU, bleeding from multiple places.

His pain had still not been addressed.

A counselor from the MNJ Institute of Oncology, Department of Pain and Palliative Care made an overnight bus journey carrying essential opioids to try and reach the family, while other avenues were explored locally.

On the 20 August, despite our best efforts, Mahesh died hooked up to machines, far from home, in unyielding and unspeakable pain, watched by his horrified parents.

He had completed his 5th birthday just the day before.

This is not a story about the pros and cons of euthanasia – a concept hotly debated today by an entire country that, at best, has a feeble grasp on its many nuances. This is a story about the unforgivable failure on the part of the healthcare system to address the boy’s pain in the absence of curative treatment options.

Before we demand unilateral legislation for or against euthanasia, we need to examine the reason why so many people seek it. If the sole reason is pain and distress that we have an arsenal of medication to significantly relieve, but withhold, it is not just incompetence or ignorance – it is the equivalent of wilfully inflicting torture on another human being.

The ordeal left deep scars on everyone who connected with this family for the few days and hours before Mahesh died. A senior palliative care physician reported feeling “ashamed” that one of the hospitals Mahesh was taken to is a stone’s throw away from her office window. The hospital did not even think to refer the child to its neighbour, which happens to be one of the leading palliative care departments in the country.

The counsellor who made the overnight journey, and has extensive experience in palliative care, was left numb with grief and despair in the aftermath of witnessing Mahesh’s traumatic death.

The rest of us continue to feel in turn appalled, angry, indignant, helpless and heartbroken at the reprehensible way in which this family has been dealt with over five long years, when all the while help was at hand.

Mahesh’s father said that on several occasions, after making what must have been a cruel journey over long distances with a very sick child and no resources, they were outright denied admission.

We cannot take lightly the fact that we know about Mahesh only because someone told his story, whatever the angle might have been. There are thousands of families undergoing this ordeal as you read this. Some have not waited for death to come naturally. Two years ago, a couple killed their own child and then committed suicide while admitted in a hospital. How many more must be taking their lives into their own hands hidden behind the veil of impoverished obscurity, and going unnoticed?

At what point will we finally tap into the resources and teams that are waiting on standby for just that one referral a hospital has to make when they are no longer equipped or inclined to manage pain?

1-2-3 steps. Not even six degrees of separation.

Don’t turn away from this story because you don’t think you are like that poor family or that your life is not connected with theirs; or that you can get to the best hospitals. The best hospitals in this country would usually offer high-tech, expensive, painful intensive care to the dying person; but not pain relief. Less than 1% of hospitals in our country have oral morphine, which is classed as an essential medicine in the Government of India’s list.

If you consider one of the markers of a civilized society to be its stand on the right to self-determination, know that making available the human right to freedom from pain is an even bigger touchstone.

Everyone is connected. We are your connection. You can play a part.

Let no more people seek to euthanize themselves, their children or loved ones when a pain-free life is within reach.

Read the previous article, Man seeks euthanasia for son, on The Hindu website.