Filmmakers focus on palliative care and poverty in Kenya 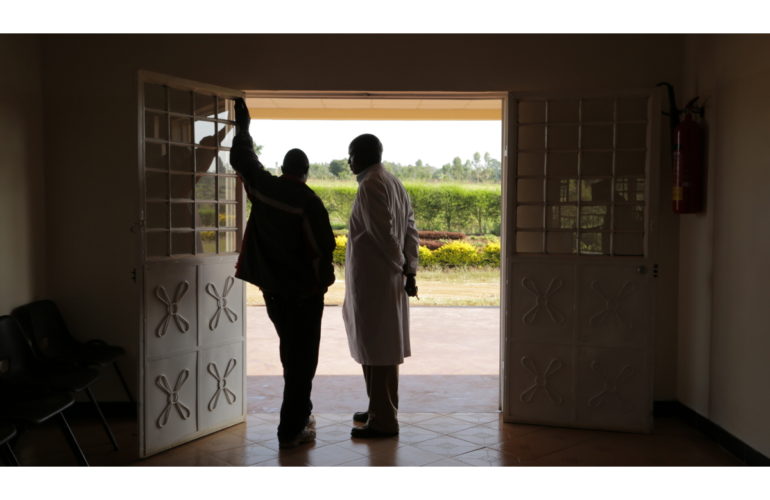 Filmmakers Kimberly Nunez-North and Travis North are currently in post-production on The Space Between documentary, which focuses on the effects of poverty on healthcare in Kenya and the increasing importance of palliative care.

The team travelled to Kenya earlier this year to capture the stories of individuals struggling with life-threatening illnesses, some of them preventable, at the Living Room hospice near Eldoret.

The documentary profiles four guests at the Living Room hospice as well as Living Room founder Juli McGowan Boit, a nurse and HIV volunteer in rural Kenya who was inspired to partner with local leaders to found the hospice.

Guests profiled include: Maggie, a young mother who is nearing the end of a long battle with cancer and whose thoughts are with her children. Jacob, a teacher who developed four life-threatening bedsores while receiving treatment in an overcrowded hospital. The wounds tunnel so deep they are unable to heal on their own. Barnabas, a grandfather who is dying of throat cancer in a public hospital and suffering due to lack of morphine. His only request is to be able to die at home surrounded by his family. James, a young man who is suffering from HIV and is afraid to start treatment due to social stigmas.

“We started our journey more than three years ago when a mutual friend introduced me to Juli. We met over coffee and talked about her plans for the hospice. I was truly amazed and moved by her work and her mission to provide comfort for those living with life-threatening illnesses and to give everyone – regardless of their economic situation – the ability to die with dignity. I knew that this was a story that I needed to tell,” stated producer and co-director Kimberly Nunez-North.

While in Kenya, the producing team received unprecedented access to HIV clinics and hospitals. They also filmed in-depth conversations with experts and physicians whose primary focus is on palliative care, including interviews with Dr Zipporah Ali, head of Kenya Hospice and Palliative Care Association in Nairobi and the first palliative care doctor in Kenya (and one of only five in the entire country); Dr Esther Chege Munyoro, coordinator of the Palliative Care Unit at Kenyatta National Hospital in Nairobi, Kenya; Dr Joe Mamlin, former field director of AMPATH and one of the original doctors who started HIV/AIDS work in Kenya; and Dr Greg Gramelspacher, palliative care specialist and professor of medicine at Indiana University who lectures on the topic of palliative care in Kenya.

“This was a truly life-changing project, and we were honored to meet with so many notable physicians, healthcare professionals and educators who have dedicated their careers to raising awareness of and increasing access to palliative care,” noted co-director Travis North. “We look forward to sharing this project with the world.”

The documentary is currently in post-production and recently launched an Indiegogo fundraising campaign to generate finishing funds, including hiring a professional editor, sound mixing and color correction. They hope to premiere the film by the end of 2013.

Kimberly and Travis have successfully worked together as a creative team for more than a decade creating hundreds of hours of content for nonprofit organizations, independent films, documentaries, TV series and studios. Between the pair, they’ve made a notable mark in film, television and the web. In 2012, Kimberly and Travis founded Passion Projects, Inc., a production company dedicated to producing creative content that challenges, inspires and incites change with the intent of shedding light on global social issues, because they matter. The Space Between is the first film under their new production company.