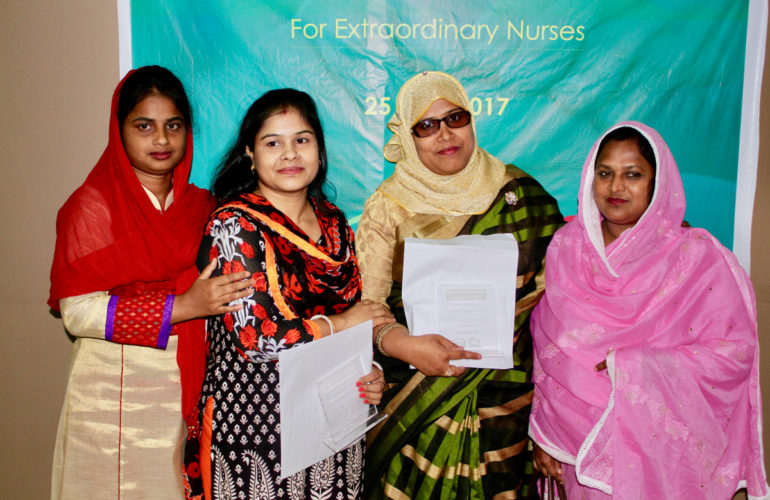 The evolving epidemiology of life-limiting diseases across the world has created an urgent and growing need for palliative care services.

However, in a large proportion of the world there is no access to palliative care for persons with serious or terminal illness.

Palliative care is a new field in many countries, including Bangladesh. It focuses on providing people with relief from the symptoms, pain, physical stress, and psychological and social stress of life limiting illness. The goal is to improve quality of life of the patients and their family.

Nurses play a significant role in hospice and palliative care. In addition to the conventional nursing duties of observing and recording symptoms and treatments, they also provide psychological and emotional support to terminally ill patients and their families.

Devotion to serve the poor and indisposed, rock-like in faith, my mother Farida Khanam was entrusted with the mission of proclaiming God’s thirsting love for humanity, especially for the poorest of the poor.

Farida Khanam graduated from Harvard University with a Masters of Science in Public Health. Throughout her career she has published numerous papers on public health issues.

Besides being an excellent researcher; caring for others and placing their needs above her own defines Farida Khanam.

‘Service above the self’ was the motto of her life, which is the core value of palliative care providers. In 2015, Farida Khanam was diagnosed with cancer and after receiving chemotherapy for one year, started receiving palliative care at Hospice Bangladesh.

During her last six months of life, Dr Shahinur Kabir and his team took care of her symptoms and managed her pain effectively.

The devotion of the nurses recalled what Farida Khanam did in her entire life – serving those who do not have resources or strength to return the favour.

That is why after Farida Khanam’s death, as her daughter, I honoured the nurses with the first ever: ‘Farida Khanam Palliative Care Nurse Award’.

This award will be given every year to appreciate the role of palliative care nurses in the field.

This year, for the first time, we honour four nurses who through their hard labor helped seriously ill patients to live with dignity and to die with dignity.

The winners of the inaugural Farida Khanam Palliative Care Nurse Award are:

Each winner received a certificate, crest, and five thousand taka.

The award ceremony programme started at 4pm. A groundbreaking documentary on palliative care: ‘Life Asked Death’, produced by The Lien Foundation and Asia Pacific Hospice Palliative Care Network, was shown at the beginning of the event to provide an overview of the status, need, and opportunity of expanding palliative care in Bangladesh, Myanmar, and Sri Lanka.

I presented a keynote paper on my mother’s life and work. This highlighted her charity work, the similarity in the motto of her life and palliative care, and the significance of the award for palliative care nursing.

I expressed my heartfelt gratitude to the doctors, nurses, and social workers of Hospice Bangladesh who provided palliative care during the last six months of my mother’s life. These included Prof. Dr M. A. Mabud, husband of Farida Khanam, Dr Momena Begum, Oncologist, BSMMU.

Dr Shahinur Kabir, Founder of Hospice Bangladesh, explained the selection process and introduced the winners to the audience.

While receiving their awards, the winners shared their experiences of palliative care with the audiences.

They received their awards with tears of joy and said that the award will encourage nurses to join the field of palliative care in the future.