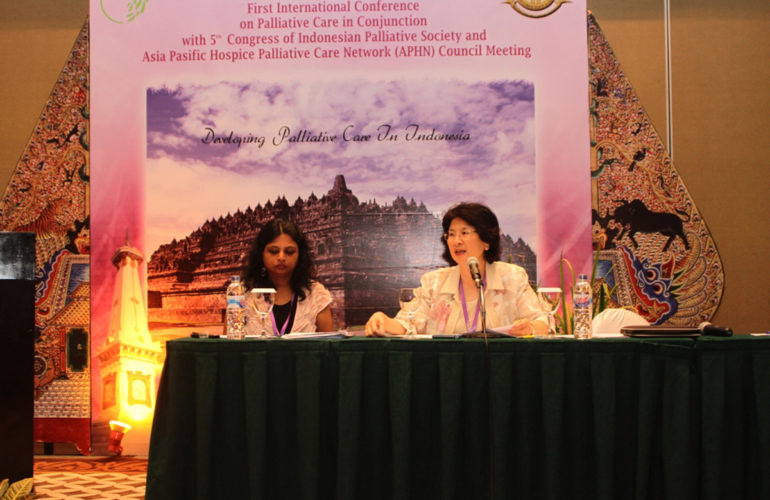 Indonesia is a developing country in Asia with the population about 240 million people, where incidence of degenerative diseases, HIV/AIDS and cancer has been increasing in the last 3 decades.  The significant progress in presently available anti-neoplastic therapies has not been able to substantially change the survival rate of cancer patients particularly because most patients are already incurable at the time of diagnosis.

More than 250 doctors and nurses, both international and from around Indonesia, attended the two days’ symposium and 95 people participated in the workshop on pain management, wound care, nutrition and communication.  A public symposium was also held for families and volunteers.   The faculties included experts from Indonesia as well as from some countries and sector members of APHN such as Singapore, India, Australia, Malaysia, Hong Kong and Taiwan. These experts shared their knowledge and experience in how to develop palliative care  and  how to handle difficult issues such as: the integration of palliative care into mainstream health care, decision making, sedation in palliative care, futility, and the palliative care team. Various papers on symptom management, psychological problems, social difficulties and spiritual issues were also presented in this scientific meeting.  The scientific program was presented in part in Bahasa Indonesia (the national language of Indonesia) and in English (given by the international faculty).

The conference gave a boost to the development of palliative care in Indonesia , particularly as the organizers were able to engage the Ministry of Health, with the Deputy Minister of Health making a speech at the Congress opening.  Following the conference, participants were invited to dinner at the palace of the Sultan of Yogyakarta, which is considered the cradle of Javanese culture.

The meeting has brought a positive impact to the government, education sector and practitioners to develop palliative care faster and better in Indonesia. To the Indonesian Palliative Society, the event has even enhanced our confidence to timely disseminate the philosophy and the need for palliative care, and to develop new branches in the whole area.  The commitment of APHN in supporting the development of palliative care in Indonesia has been shown through this event and the Indonesian Palliative Society has committed to contribute more in the APHN programs and enhance our mutual friendship with the country members.