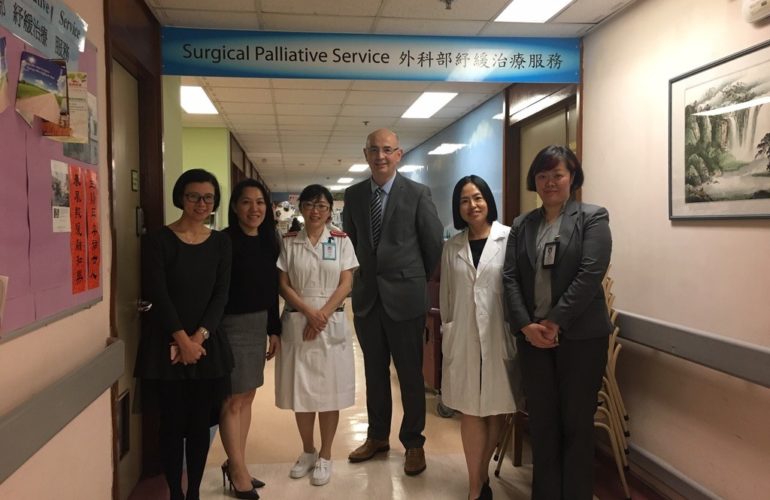 One of the advantages of joining the older demographic is that occasionally we get asked to speak at palliative care study days in interesting places across the world.

The irony is that rather than teaching others, such experiences invariably lead to opportunities to learn as our pre-conceptions are challenged. We experience new ways of thinking and applying palliative care principles in contexts and cultures which are very different from the world of Dame Cicely in South East London. There is much to learn and consider.

Hong Kong is a place of contrasts, cultures and political and historical sensitivities. It is one of the busiest, wealthiest and most active cities on the planet. Part of China’s Pearl River Delta Economic Zone, which is the fastest growing mega city of the fastest growing province in the fastest growing large economy in the world, Hong Kong retains a distinctive connection with the UK alongside its ties to the mainland.

Hong Kong has more Rolls Royce cars per head of population and more high-rise buildings (7685) than any other city on earth. Yet, despite its wealth and success there is a tendency to downplay the success of local achievements.

I was brought up to understand that traditionally many Chinese people regarded death as taboo. Discussions around death are associated with bad luck and to be strictly avoided. Many of the high-rise buildings still avoid naming fourth floors as the word for four and death are similar. However this traditional taboo is rapidly changing.

The recent death of the father of fibre optic communications, Professor Charles Kao, from dementia in a nursing home provoked widespread discussion across media and social media outlets.

This discussion would have been unheard of even a few years ago. Professor Kao, who had witnessed the medicalisation of his own father’s death, had made it clear that when his time came he did not want to be actively kept alive.

That such a prominent citizen should have expressed such views really promoted  much discussion in a country where 90 percent of people die in hospital and where the possibility to die outside of hospital is hampered by rigid legal and policing reporting demands.

Traditional views are being challenged as the Hong Kong “twitterati” grapple with what constitutes a good death and whether dying needs to be a medical process.

With a growing elderly population, widely scattered families and the mixed public private health infrastructure under real pressure, there is a growing hunger to discuss such matters and overcome the reticence of previous generations.

Palliative care services in Hong Kong are now well established since their initiation in 1982, though the pressure on palliative care teams is intense.

Tuen Mun Hospital has almost 2,000 beds, but regularly has an occupancy of 130% due to the pressures from the surrounding population. Yet despite the pressures of such an active acute hospital, the palliative care team are very well integrated across the hospital’s different services and their advice and input is sought daily.

The hospital palliative care study days were attended by a wide range of staff from across the hospital. This demonstrates how well regarded the team have become, and how much their holistic input is appreciated.

There are 43 inpatient palliative care beds within the hospital and an outpatient and day hospice service for the never ending flow of patients and families in need.

The main areas of liaison work across the hospital involve helping to manage challenging symptoms and in support for difficult conversations with patients and families.

Tuen Mun is the first hospital I have seen which has its own dedicated Palliative Surgical ward. This unit, comprising eight beds provides palliative and supportive care to patients with surgical problems for whom surgery is not aimed to cure.

Across the world, surgeons and patients face the challenge of balancing the potential benefits and risks of surgery with audit of outcomes revealing starkly that inappropriate surgery shortens life and increases the suffering faced by dying patients and their families. The designated palliative surgery ward allows for such patients to have their symptoms managed holistically with input from the surgical and palliative teams and has provided surgeons with another option when faced with patients for whom “something must be done.”

The improved mortality and morbidity data shows how significant this innovation has been and poses the question as to whether such units should not be in place wherever post-op data shows that the wrong people are being operated on.

Such innovation and the commitment and energy of the palliative care team in Tuen Mun is truly inspiring. By bringing their unique palliative care approach to patients and families in a manner sensitive to the nuances of Hong Kong the team are modelling an approach and a service which could have a profound impact across the whole of China. Truly there is much to learn and consider.